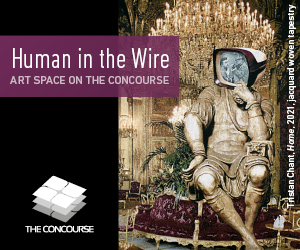 “I feel like we’ve got a handle on this, but that’s just luck and geography,” Abdul-Rahman Abdullah tells me in an early morning interview. Along with his wife, artist Anna Louise Richardson, and their two daughters, he’s based on a cattle farm south of Perth in Western Australia. Isolation is something they’re used to.

At a time of physical distancing, of thinking about keeping at least a metre and a half away from others, Abdullah talks about distance on the farm in terms of kilometres. The property has a two kilometre driveway, the nearest neighbour is four kilometres away. In his studio, if you look out through a gap in the tree line, you can see for kilometres.

COVID-19 has rolled into a series of huge life events for the Abdullah-Richardsons. They were hit hard by the fire season. No one was hurt and no buildings were lost, but they lost half the farm. Just before the fires, there was the birth of their second baby daughter, and just before the pandemic, the passing of a family matriarch. “It’s been back, to back, to back for us,” recounts Abdullah. “Because COVID-19 isn’t a direct in-your-face thing for us on the farm, it just felt like another event I guess.”

Family and memory are central to Abdullah’s art. His sculptural practice often uses animal forms as bearers of meaning, narratives and feeling to negotiate the complex layers of personal histories. The histories he refers to are related to his family around him.

He’s interested in the ways that memories can become a kind of mythology—where they exist in a space that isn’t wholly fact or wholly fiction.

“Once experience passes into memory, it’s not just reality or fact. It’s more than that—memories become entangled with your inner dialogue, the way you feel, the way you sense the world around you. I love the idea of making something that other people can experience—to get inside a memory.”

This urge towards storytelling is significant and complex for Abdullah, especially within Australia’s cultural imagination. His upbringing and history is one experienced on the periphery—he grew up as a brown Muslim kid in the suburbs of Perth. His work imbues this history with a sense of poetic resonance and depth, giving stories that are usually relegated to the margins a sense of gravity and weight.

Many readers may be familiar with his work Pretty Beach, commissioned for The National 2019 at the Museum of Contemporary Art, Sydney. A highlight of the exhibition, Pretty Beach was a large-scale sculptural installation of a fever of stingrays, swimming under a blanket of rain made from crystals. It’s a rumination on his Grandpa Cliffy, who died by suicide in 2009.

“Grandpa Cliffy lived in a fibro shack on the water,” recalls Abdullah. “There was a jetty where you could see rain come in like a curtain, you can literally see the edge of it coming. I could see stingrays swimming clear beneath me and they disappeared under the rippling surface as the rain came in, they were taken away from my view but their existence just continued on unchanged.”

Animals are a constant in Abdullah’s work—cats, dogs, crows, camels, pigeons, roosters. They’re the basis of his whole visual language, and become cyphers for human relationships and narratives. They take on different meanings, and are imminently accessible to an audience.

“Everyone carries their own mythologies, associations—something beyond this straight objective experience of the world,” explains the artist. “I use animals because they’re so familiar. People project themselves all over it.”

During the shutdown, Abdullah has been working towards a major group exhibition that’s been postponed: titled I’m a heart beating in the world, the exhibition is set to eventually show at 4A Centre for Contemporary Asian Art, and will later feed into an international project staged during the Venice Biennale in 2022. He’s working in reverse for that exhibition, he tells me: working from an image of a mythical winged horse in Islamic culture, he’s been thinking about impossible journeys, especially in relation to his own mother’s arrival here from Malaysia in 1971. Further into 2020, he’ll be delivering a project with his brother, Abdul Abdullah.

Yet at this moment, it’s life on the farm: Abdullah and Richardson alternate half a day parenting and half a day in the studio, and spend the evenings together. “We cheer each other on, and really work as a unit,” he says. They both have a keen understanding of the joys, trials, strange obsessions and hard grit involved with being an artist. The reciprocal support has been vital.

This period has brought positives and negatives. Under isolation there’s been less assistance with childcare, so parenting has increased. At the same time, having extra moments to spend with his kids at such a special time is a boon. “We’re providing their whole lives for them,” Abdullah says. “But you never stop picking up toys or cleaning bums”.