Penelope Cain’s Interregnum is concerned with the past, present and future of coal, and more broadly the use and misuse of power. The title refers to the interval between the end of one reign and the beginning of the next, suggesting the possibility of change; a shift in thinking, perception, or dogma. This shifting quality is perceptible in the artworks themselves, which range so broadly across expressive modes that no one style dominates. Sensitive to the Casula Powerhouse Arts Centre’s former role as a coal-burning power station, Interregnum excavates our relationships with coal and geological time by drawing on the fossil record, the recent past, and the present.

Three works on paper hover high above the Powerhouse’s industrial-scale foyer. Spot-lit above the building entrance, they’re intriguing at a distance and remain beguilingly tactile up close, releasing remarkably dimensional layers of meaning. From the series If There Were Once the Sounds of a Forest, 2019, the prints have been formed by stacking photographs of fossil records from three continents, re-merging photographic plates of geological artefacts which (in demonstrating tectonic shifts) proved the existence of Gondwana.

The Casula Powerhouse has now been an arts centre for as long as it was a power station, but the quirks and foibles of repurposed buildings can pose challenges to the artworks they house. It’s a shame that these prints had to be hung so high, since the layers of surface detail that re-wrote scientific understanding, and the lush print tonalities, are only fully visible here to the statuesque. Similarly, the mural work If there was a Conclusion to an Extinction Event (stardust), 2019, referencing both fossils and the Powerhouse’s own history of burning fossil fuels, has sunk rather too successfully into its surroundings, being materially and visually congruent with exhibition design photo-murals.

Unlike the highly-crafted prints, the assemblage Power #2, 2019, has a provisional quality. The artist has borrowed an old ceramic insulator used when the power station was operating and rested it on feathers, as though it has plummeted from the sky and squashed some poor creature. Which, in a symbolic sense, it did.

Flanked by carbonised branches, the assemblage rests on a funereal plinth atop a black shroud, its oily gleam likely derived from fossil fuel in the form of a petrochemical-based polyester.

Approaching If History Was Written by the Victors, 2019, the tone changes yet again. A long double formation of fluttering banners initially reads as blandly civic. For this viewer, walking along the formation delivered a punctum– philosopher-semiotician Roland Barthes’s eccentric, enduring word for something in a photograph that unexpectedly pierces the viewer’s feelings. An initially-abstracted image appears on the banners, gradually resolving with a small shock of recognition into a closely-cropped photograph of men in the Australian Parliament handing around a piece of coal.

All choleric orange-red skin and anonymous collars and ties, this penetrating pastiche of larger-than-life masculine arrogance is a scathing criticism of governmental misuse of power.

This piece shares with other recent flag-based artworks (as seen in the Artspace group show, Just Not Australian, for example) a sense of urgency in critiquing Australian identity and policy. Here, it’s the particular kind of greed, arrogance and ignorance that fails to respect life beyond our own brief spans. Sometimes polemic, sometimes poetic, Penelope Cain’s Interregnum invites consideration of the relationships between deep time and present decision-making that are determining our future.

For the new instalment of their Living Treasures series, the Australian Design Centre invited ceramicist Prue Venables to exhibit a new collection of her enigmatic, metal-augmented porcelain objects. 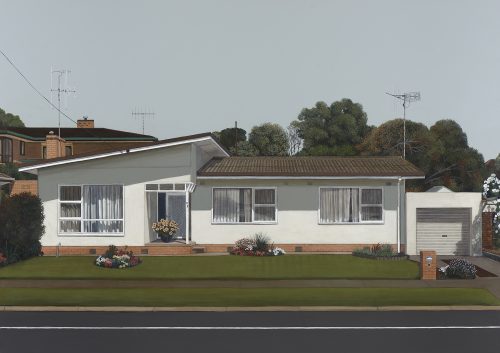 “In this new body of work my paintings focus on houses that were influenced by the trend of modernism that crept into the suburbs, mainly in the 1960s,” says Sweaney.