With a practice spanning three decades, Louise Weaver is a Melbourne-based artist who works across painting, printmaking, sculpture, installation, sound and photography. Yet it’s for her sculptures of meticulously crochet encased animal forms and branches—which she began developing in the 1990s—that she has become most well-known. In light of her current survey exhibition Between appearances: the art of Louise Weaver at Buxton Contemporary, Weaver talks through her process, how gender informs her work, and what nature and culture mean to her.

Tiarney Miekus: From what you’ve said about your practice in the past, it seems that even as a child you intuitively knew you were going to be an artist. How did you know?

Louise Weaver: I don’t think it’s really knowing what the word ‘artist’ meant, but I knew that I loved making things and experiencing and understanding the world through using things I had at hand. I didn’t really think of them as artworks when I was younger. Also, my parents became aware it was an innate thing I was probably best at, so it was a combination of my own self-awareness and having the support of my family that made me feel making art was something I could do. Growing up I studied art very independently. I went to a school when I was a child that only had 12 people, which was on the farm that I grew up on, and when I went to the local high school I was the only student to study art in year 12, so I did it by distance education. It was almost like I was in art school in my later years of high school.

TM: But then you had a brief stint studying nursing?

LW: I did nursing as a requirement of needing to be able to support myself entirely once I left home— which I did at 18, and I supported myself throughout art school by working as a nurse. I think my parents thought I should have completed my university degree as a nurse, but I knew that art was what I wanted to pursue.

TM: How does a work of art begin for you?

LW: There’s an intuitive and spontaneous side of learning through making which is such an important thing for me. But then I have to counter that with my own personality which is to be very analytical and think about things quite formally. It’s combining both of those attributes. I also want to learn things I don’t know, and understand things I haven’t experienced before.

TM: You began practising as a painter and now your work spans painting, drawing, printmaking, photography, sculpture, installation and sound. Is that cross-discipline practice simply intuitive for you?

LW: Yes, it is. I have a very inquiring mind. I need to stimulate myself in terms of new ideas and new possibilities. But it’s also the ideas that develop and come into my recognition that tell me what kind of medium it needs to be and how it will best be expressed. I don’t work the other way around very successfully, I’ve discovered. I just need to be intuitive and listen to my own sense of what I should do. I think that’s a very powerful experience and a very powerful tool.

TM: In the 1990s you began creating your well-known sculptures of branches and animal forms that have a surface of crocheted ‘skin’. Do you remember the first one you created?

LW: It was a work titled I am transforming an antler into a piece of coral by crocheting over its entire surface. I was thinking of crocheting and of using very intense mark-making, which I attribute to the knotting or the crochet stitch. [The work] came out of a spontaneous thought that I had— and I say spontaneous, but I think it probably came out of making lots of work and also being at a point of readiness to understand what to do next. It seemed like a logical thing—well, it wasn’t quite logical at all on one level! It’s kind of nonsensical to try and transform one thing into another thing. There’s an alchemical, magical, shamanistic element to it. But it’s also the literal transformation of one thing into another where the title is both an explanation for the work and it encourages the viewer to consider it as a possibility. And if that [is possible], then why not something else in that same way? The crochet itself was a stand-in for the appearance of coral as an organism that grows from one thing and branches out into other forms. It was a way of thinking about the similar growth pattern of an antler. Also, using crochet was not necessarily related to its history of craft-related practice. It was thinking about creating a skin or semi-permeable membrane that could encourage a sense of protection, and thinking in psychological ways as well.

TM: On that idea of thinking psychologically and of protection— I read that as a child you had a severe fracture and were placed in a total body plaster. You talked about the experience as if you yourself were in another skin, but this second skin was a form of healing. Do you think that has informed your work?

LW: Recovering from that took a long time physically, but I think it took much longer psychologically. It was combined with being flown to the Royal Children’s Hospital from our country property and being isolated from my family for the first time. It’s all those sorts of things that leave a lasting impression on you as a child and I was probably coming to terms with that when I was making those earlier works. But that’s a personal narrative and I was still thinking of the work very much in analytical terms. I think personal experiences are a good starting point for ideas, but I think that’s all they are—starting points.

TM: What’s the process in crocheting over an animal form and how do you find your animal forms?

LW: I use foam casts of once-living animals that I source from a taxidermist—a very ethical taxidermist—and the skin and fur are removed from the animal and what’s remaining is cast and they’re made as multiples that I’ve acquired in high-density foam. They look very anonymous and in most cases people can’t register what kind of species they are. For instance, someone says a fox is a dog or cat or kangaroo. I’m playing with their anonymity and also giving them an opportunity of another kind of life with the crochet skins.

TM: How does gender inform your work? And do you consider your work feminist?

LW: Yes, it’s feminist in different ways. I come from an educational background studying art where all my lecturers were male, until my final year, when I had my first female lecturer. I was told by one lecturer that art school is finishing school for girls from the country—that was the sort of environment I was taught in. But I also had some very wonderful, very strongly supportive male lecturers. It wasn’t a completely negative experience, but I was very conscious there were very few female artists represented in galleries, very few women having exhibitions. There were also very few places for young artists to show when I first started exhibiting, which has been wonderful to see change in this period of time. But at that [earlier] time, it was just an acknowledgement of the work men were making in Australia. Not many women were making things that were unashamedly feminine in terms of the selection of materials with a gendered or historical relation to craft. In fact, when I first started making crochet covered objects, young women especially would come up and ask what I had done because they’d never seen crochet before. They’d never seen many of the things I was using because it was before the revival of those things in fashion. I think it was very consciously a choice in that way. But as I became more familiar and able to make the work in the way that I wanted to with a heightened sense of aesthetics and the technical facility that I wanted—because I had to teach myself how to do it by reading books from the library and just practising—it transformed into something far more than my relationship to craft.

TM: Your work sustains many juxtapositions such as that between nature and the artificial. Why are those binaries so fruitful? Is it a tension you want to uphold, or bridge? Or is there a kind of logic that connects nature and culture for you?

LW: It’s probably all of those things depending on the particular artwork and its expression within a context. When my work is exhibited at places like the Australian Museum in context with things from their collection—their historically significant cabinets of curiosities and collected specimens— the artwork has significance that is about the museum culture, collecting culture and the specimens, and putting those artificial works back into the museum context. In some earlier works I think there was a definite nature-culture divide, but I think they’ve become more seamless. But that varies too! I think the nature-culture divide is one layer of meaning for me in terms of what I’m thinking about in making the work, but it’s also in terms of art history and thinking about actions and activities of making in different cultures and their specific use and function. For me, I don’t like to be too specific about how people should read things visually because I think people come to the work with different experiences and knowledge, and I want it to be open and available and accessible to everyone.

This interview was originally published in the January/February 2020 print edition of Art Guide Australia.

Listen to our latest podcast interview with Louise Weaver here. 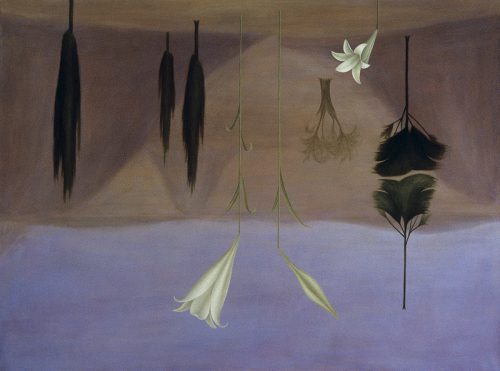