Growing up on a public housing estate built in the 1960s at Green Valley, south-west of Sydney, artist Catherine O’Donnell remembers her family feeling lucky that they lived in their humble fibro bungalow. It had the same layout as many other houses in the neighbourhood—walking into a friend’s home was much like walking into your own. The construction of the houses, the formation of the fibro, and the configuration of the doors and wooden window frames are hallmarks of O’Donnell’s art today. “That architecture is imprinted in my brain,” she laughs.

From these beginnings also came O’Donnell’s love for minimalism. Sometimes, her play with shadows—implying what is not directly represented in the picture—can help her audience impose their own narratives on her art.

“We didn’t have the infrastructure and a lot of people had to travel a long way to get to work. Yet you had to jump hoops to get in; you had to prove you would be neighbourly. You felt lucky to be in those places.”

There was stigma about living in Green Valley, however. “When I was there, you were labelled by your postcode. We were the ‘valley kids’, the ‘valley girls’.

They did say not-nice things about us. But I loved it. I was happy.”

O’Donnell’s drawings in compressed charcoal and graphite pencil return constantly to the ordinary suburban landscape of that childhood. Today, living in the Blue Mountains, O’Donnell works from her home studio most weekdays from late morning until about 10pm, particularly prior to her exhibitions, and sometimes on weekends. She also teaches drawing at the National Art School.

Despite a lifelong “intuitive” talent for drawing, it was only in 2000 that O’Donnell formally learned to draw by enrolling in a TAFE course. Until then, she had been a laboratory technician, checking quality control, testing raw materials for antibiotics and analgesics, and had also worked in a school science department.

“Drawing has always been the core of who I am but I was in the haze of four children growing up, running around after them and taking them to sports. When the last one went to school I thought, ‘There’s my time now to go and do something’. My husband suggested I do something that I really loved.”

O’Donnell says her work may be “subtly political”, but despite her working-class origins and her focus on mid-century, low-income housing, her intention was never to centre class politics in her art. “My intention was to do something that I loved, and this is what came out,” she says.

Having bought her own first home decades ago—a fibro cottage, for $38,000—does she worry about housing affordability today? “I do. My children are going through that at the moment. I don’t know how they do it. A modest home around where we lived is $700,000 to $1 million. That’s phenomenal. They’ve got to have these mortgages and 30, 40, 50 years down the track they’re still going to be paying them off.

“It is sad because it is out of the reach of a lot of people. It was the Australian dream, but I don’t know that it is as much as it was. Some of my children are renting, and the renters have had a hard time when Covid-19 hit and they couldn’t pay their rent.”

O’Donnell gets many heartwarming responses to people who look at her art, which celebrates the ordinary of suburbia. Some talk about their memories of living in a similar home, and remembering the crack a venetian blind made when prised open to peep through, or the wooden windows that won’t push up and open as they should. Occasionally, a builder will critique whether she has a certain detail correct.

“You get all sorts of responses. That’s why I don’t like to impose anything on the viewer. I put my work out into the world. It is what it is, and it stands on its own. That’s why I won’t put [human figures] in because I want the viewer to engage with their own experiences, their own memories. Then it becomes a collective memory and shared experience.” 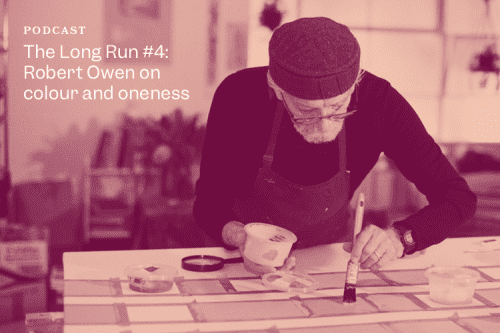 “Art is this amazing subject,” says Robert Owen. “It comes from different people and it contributes to cultural identity in a way that can question ourselves…”