Long before astronaut Neil Armstrong took his “one giant leap” artists have been fascinated by the Moon. To celebrate the 50th anniversary of the 1969 moon landing, Steve Dow examines the perpetual creative pull of our nearest celestial neighbour.

In the northern hemisphere summer of 1969, the Apollo 11 lunar mission launched from the National Aeronautics and Space Administration (NASA) headquarters at Cape Canaveral, Florida. Four days later, on 20 July 1969, Neil Armstrong and Buzz Aldrin became the first humans to walk on the Moon.

America’s space race with the USSR may have weighted the endeavour with geopolitics, yet 50 years after the moon landing, artists’ imaginations continue to roam free about our planet’s natural satellite.

Artist Robert Rauschenberg was invited by NASA to witness the launch. In the immediate aftermath the artist described the event in loose, poetic prose, “The bird’s nest bloomed with fire and clouds. Softly largely slowly silently Apollo 11 started to move up. Then it rose being lifted on light. In its own joy wanting the earth to know it was going. Saturated, super-saturated, and solidified air with a sound that became your body. For that while everything was the same material. Power over power joy pain ecstasy there was no inside, no out. Then bodily transcending a state of energy. Apollo 11 was airborne, lifting pulling everyone’s spirits with it.” Rauschenberg recorded these memories in Stoned Moon Drawing, 1969, which in turn inspired his subsequent lithographic series.

For artists, and the public in general, the Moon continues to inspire because it’s “viewed from different perspectives constantly,” according to Lisa Sullivan, senior curator at Geelong Gallery, where the wide-roaming exhibition The Moon (comprising 84 works) is among several exhibitions marking the landing’s 50th anniversary.

At Geelong, photos borrowed from Melbourne collector Theodore Wong include NASA images, as well as some of the earliest images of the Moon surface from the late 1950s, sourced from the Russian space program. There are also images of the far side of the Moon.

“It was important to show that there was a space race,” says Sullivan, “and of course there have also been subsequent trips to the Moon by the Chinese. A lot of our focus has shifted to Mars, but the Moon is still a presence for exploration. The possibilities are still alluring.”

While Rauschenberg’s Stone Moon lithographs were unavailable for loan, there is plenty of notable art at Geelong that aspires to moon travel, from George Méliès’s famous 1902 film A Trip to the Moon to the William Kentridge 2003 film Journey to the Moon, which references the Méliès film.

There are earlier works, too, such as Artur Loureiro’s Study for ‘The Spirit of the New Moon’, an 1888 Symbolist painting showing a woman sitting on the Moon’s silver crescent. Meanwhile, Australian artist Mikala Dwyer’s new hessian installation work The Moon references 17th century astronomy.

Then there are the effects the Moon is perceived to have on creatures on Earth. Australian artist Louise Weaver’s work at Geelong, Moonlight becomes you, is a new installation that builds on a previous version, taking the viewer into the nocturnal world of a bobcat, minx, fox, hare and owl using casts of animals sourced from taxidermists but made of foam and wire and covered in textiles.

For Weaver, the moon landing is not only an interesting historical event, but one steeped in mystery and fantasy. “You can think about it in terms of ‘Did it really happen?’ A conspiracy-theorist context. All the things that have intrigued and mystified people, and I love all those aspects,” she laughs. “The Moon also has all these connotations historically in all cultures from the beginning of time – lots of stories and narratives about the Moon, and the impact it has on animals, which has never been documented and researched thoroughly, really.” And then, she adds, “There’s the question of whether the Moon actually, really exists. That itself is a fantasy, too,”

Albert, a Girramay and Kuku Yalanji man, is interested in what space exploration means for the colonisation of new lands, and Astronaut features his ongoing studio project of drawing astronauts, an ever-growing cache of artwork tied to his anthropological readings.

“Space and aliens have always been intrinsic to my work in looking at otherness,” says Albert, whose work at CPAC is called Exploring the New Frontier. “Astronauts are a way of looking at the new frontier. Because of the abstract nature of the work, I like to ask: Who is under the helmet? Are these works representing something in the future, or do they go back to the beginning of creation, and stories that come from the sky? What are the constellations we don’t even see any more?”

Might the space race be seen as imperialistic – nations trying to own the cosmos? “Yes,” says Albert, “and who owns space – who actually owns the Moon?” Is Albert seeing the Moon from an Indigenous perspective? “Absolutely. I like to say there might be female Indigenous astronauts. Who is exploring this new frontier, and why?”

Do artists keep coming back to the Moon and to space because it offers shifting perspectives? “Of course, and there’s an element of fascination in the idea of the unknown. You speculate. I like to look at it within the idea of Aboriginal mythology but also global mythology – there are so many accounts of civilisations coming from the stars or the sky. There are Aboriginal paintings of constellations you can’t even see any more.”

Jerram has said that the Moon has acted as a “cultural mirror” to our beliefs and ways of seeing from the beginning of human history, interpreted as both a god and a planet over time. Jerram’s aim is to allow an audience to observe human cultural similarities and differences while contemplating moon science.

The Jerram work is part of the MAAS Apollo 11 exhibition, which includes more than 200 objects. Exhibition curator Sarah Reeves, who is also an astronomer, says The Museum of the Moon provides a “much-needed moment of reflection of awe and wonder. For us here on Earth, the Moon is this beautiful object hanging in the sky, and that does naturally inspire people and make them wonder.”

“The Moon also continues to fascinate us partly because humans haven’t been back since the Apollo program,” says Reeves. “Apollo 17 in 1972 was the last time humans set foot on the Moon. Despite all the great things we’ve achieved in space and science and arts since then, all of this was achieved with computers less powerful than the smart phones we carry in our pockets.” 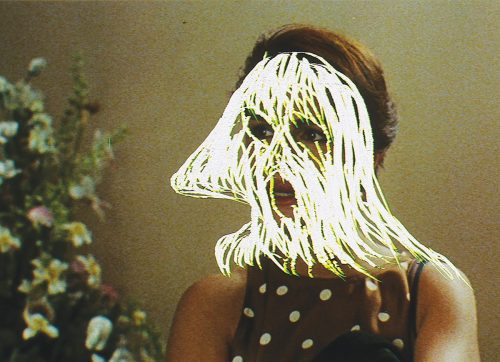 For The National, Tara Marynowsky has taken to “redirecting” a slew of 1990s film trailers, giving the female protagonists greater agency. 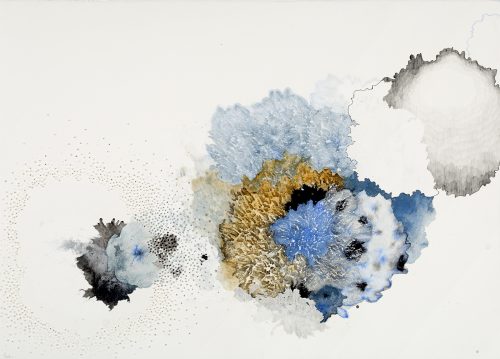 Melinda Schawel’s work is ambiguous in interpretation. On the one hand, her drifting images bring to mind the trajectory of stars, geography, mapping; on the other hand, a macro view of some organism, or even molecular structures.