From the bread riots of early 18th century USA to those in Egypt and Sudan in very recent years, bread has long been a tool and a symbol of ideology. Inspired by this fact, the group exhibition A Call to Rise is a lively engagement with issues regarding the eating and making of bread, with special emphasis on the staple food’s unique links to resistance globally, as well as the seminal role played by Aboriginal Australians in its culinary origins.

“A Call to Rise is informed by the politics of bread riots and looks at how this can take form in the context of dinner tables, bakeries and homes where dialogue and discourse often occurs,” says curator Eleanor Zurowski. Exhibiting artists include Rebecca Hall, Maike Hemmers, Sunny Lei, Vistaria Nakamarra Ross and many others.

While some artists have made work relating to the material aesthetics of bread, others have focused on what bread represents or stands for.

Vistaria Nakamarra Ross’s work, Lukarrara Jukurrpa (Desert Fringe-rush Seed Dreaming), 2020, has particular resonance. The painting depicts Lukarrara, a grass with an edible seed that is ground into flour and used for damper. The work, Zurowski says, is infused with the knowledge and ritual of bread-making associated with the area of Jaralypari, north of Yuendumu in the Northern Territory.

“Aboriginal Australian people were engaged in bread-making technologies and sciences long before what is documented or recorded,” says Zurowski, who cites the writings of Dark Emu author Bruce Pascoe as a key influence on the exhibition. “This exhibition is indebted to these practices and this knowledge, as bread wouldn’t be what it is today without it.” 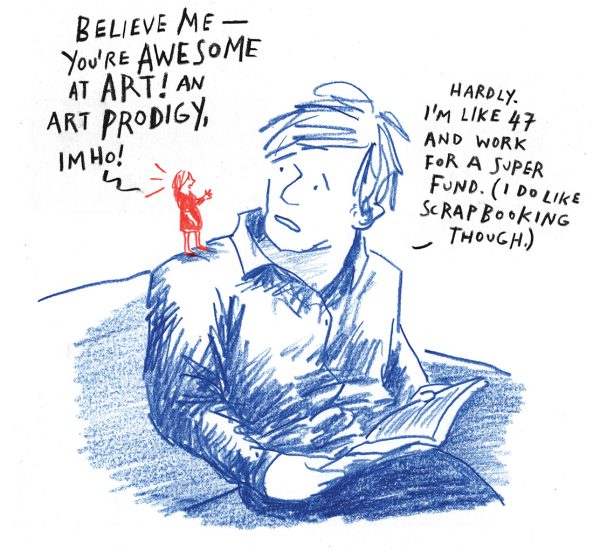 Illustrator Oslo Davis questions if you should always listen to that little voice inside your head.