Yayoi Kusama’s art grew out of rebellion and continues as a daily obsession – this despite being in her 88th year, having mobility issues, and living in a Tokyo psychiatric hospital for the past four decades. Her parents, merchants who ran an agricultural warehouse, had wanted her to wed a man of the same Japanese social status that her sister had married. In defiance, she painted day and night.

Her trailblazing performance art while based in New York between 1957 and 1972 would include group nudity. “As a child I suffered a lot because my father led a very debauched lifestyle,” Kusama revealed in a BBC interview in 2012. “I came to hate sex. As a kind of art therapy, I created lots of sex.” Kusama’s sculptured male phalluses have been likened to late career David Hockney’s tree trunks. In both cases, the objects embrace what in life – fear, mortality – cannot be controlled, only explored.

Her more recent large-scale canvases, mirrored spaces that can discombobulate the viewer and liberal use of polka dots – representing the cosmos, its planets and even people – can see her work too easily categorised. “We’re told it’s driven by deep pain and psychological illness,” Guardian critic Jonathan Jones once commented. “I don’t find it some sort of disturbing, hypnotic ecstasy but a fizzy, pop cultural style.”

A major retrospective co-curated by Brisbane’s Gallery of Modern Art (GOMA) and National Gallery Singapore will range broadly across Kusama’s seven decades of work, but emphasise her 1970s through ’90s output and use of organic materials and forms: sculptures with tendrils and blobs, objects and figures that “appear quite alien to something a human would produce”, suggests GOMA’s curator of contemporary Asian art, Reuben Keehan.

“There will be a lot of soft sculpture with a very different texture to that perception of Kusama’s very slick, surface-driven projects.”

“The show will deepen the range of thinking about Kusama’s work – because it is very hard to categorise – but will also show her more recent, large-scale installations that are so popular and came out of years of experimenting with different materials.”

The famed ‘net’ paintings will be on show. From a distance, these look like a single, bright colour or white that Kusama has laid down. Come closer and you will see, in fact, these are constructed of thousands of tiny loops linked together that look like nets.

Kusama wakes each day in a Tokyo psychiatric hospital, to which she admitted herself as a voluntary patient in 1977, to read through the many letters people send her about her work. Keehan first met Kusama in 2011 in her studio, located directly across the road from the hospital, where she has a small group of assistants who help her with priming and stretching canvases, while her large-scale works are produced in a factory.

The small studio has elevator access because she is in a wheelchair and unable to climb stairs, and walks only short distances. “I was disarmed by how lovely and accommodating she was,” recalls Keehan. “She’s a very sweet person. She is utterly dedicated to her art practice. You can only meet her for a short time, before she has to get back to painting. She doesn’t like to stick around on opening nights.”

Kusama continues to work on her My Eternal Soul painting series, begun in 2009, but is unable to make the journey to Australia. Her works today fetch hefty premiums on the international art market but what she does with her earnings is a mystery, living in relatively austere circumstances with no obvious trappings of wealth and no dependents.

She was in a relationship with surrealist artist Joseph Cornell for some years, until his death in 1972, which she has described as platonic. She never married.

There’s much to be said for Kusama’s rebellious attitude, says Keehan, and she uses “obsessive” to describe her art making.

“Japan was changing very rapidly after the Second World War,” he explains, “and she benefitted from new laws in the 1940s and ’50s that gave women equal rights to education, which meant she was able to go to art school in Kyoto and learn Japanese- style painting.

“But it took quite a while for her parents to come around to the idea she would follow a profession as an artist. A lot of Japanese women in those days were expected not to work, especially in her upper middle social class.”

Keehan cautions it would be a mistake to frame Kusama’s art in terms of her illness. “It comes closest to a depersonalisation syndrome, where she has episodes of being detached from her body. Anxiety plays a very big role in her condition: she’s talked of getting heart palpitations and having taken tranquillisers to basically normalise herself.

“When her work was reintroduced to the international market in the 1990s and 2000s, there was some discussion around hallucinations; that she’s reported experiencing as a child. We have to be careful not to stigmatise mental illness or fetishise it too much, but I think what’s extraordinary about Kusama is that she’s a very unlikely person to be, arguably, the most popular contemporary artist in the world right now.

“If you asked anyone 10 years ago who they thought was going to be the biggest artist in the world at the moment, it wouldn’t be an older Japanese lady who has health issues. The fact that she’s overcome those issues is a testament to both her rebellious spirit, her single- mindedness, and her dedication to her practice.”

Yayoi Kusama: Life is the Heart of a Rainbow
Gallery of Modern Art, Brisbane
4 November – 11 February 2018 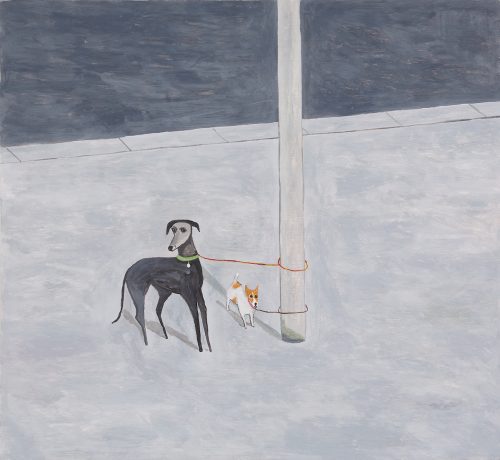 Noel McKenna’s empathy with the local dogs of his home suburb of Rose Bay, Sydney, forms the basis for a set of 26 glazed ceramic tiles and several paintings. 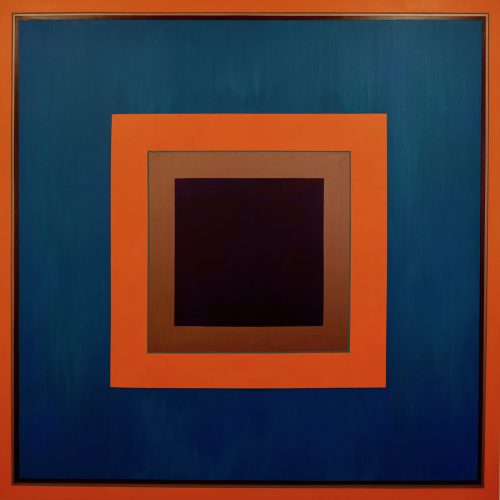 Timbre represents Mestitz’s first collection of two-dimensional paintings on board, a departure from the architectural blends of sculpture and painting she has been working with since the late 1990s.