The void is perhaps the ultimate in ambiguous phrases. It can describe nothing or anything, everything. We say something is ‘null and void,’ a tautological aphorism meaning essentially zero, empty, non-existent, cancelled. But the void also conjures up the infinite inky black reaches of space: the vast big nothing which in a sudden Big Bang instant, produced literally absolutely everything. The void is absence and presence, both at once, always.

Applied to art, the void makes me think of French artist Yves Klein’s 1960 Leap into the Void, a brilliant pre-digital bit of photographic trickery in which the artist is caught in mid-air, either falling or flying, or both, in perpetuity. The void is always liminal, brimming with potential: anything can happen.

In the group show Void, curator Emily McDaniel from the Kalari Clan of the Wiradjuri nation in central New South Wales invoked the void as a space occupied by Indigenous knowledge, stories and meaning. Here, the void is very much about Aboriginal connection to Country. As McDaniel put it in her catalogue essay, Indigenous artists Hayley Millar-Baker, Danièle Hromek, Jonathan Jones, Mabel Juli, John Mawurndjul AM, Dr Thancoupie Gloria Fletcher AO, Andy Snelgar, James Tylor, Jennifer Wurrkidj, and Josephine Wurrkidj demonstrate that “the void is always lived upon, navigated and known even as it remains unseen, unknown and undefined.”

It is interesting that the works in Void which spoke most powerfully to me were all monochromatic. This is perhaps not a coincidence, for in form as well as content these black and white artworks, by Hayley Millar-Baker, James Tylor and Jonathan Jones, seemed to highlight the ongoing challenges of negotiating a decolonised future.

For her sculpture, Meeyn Meerreeng (Country at Night), 2017, Hayley Millar-Baker arranged some 70 black volcanic stones from Wathaurong country into a roughly circular pattern on the floor. These stones have been painted black and varnished. Aesthetically this seemed like an odd decision, one McDaniel attributes in her essay to the artist wanting to “conceal their identity and protect their stories within colonial space.” And this may indeed have been Millar-Baker’s motivation.

But art, like the void, is open to interpretation, and to me this work seemed to highlight the sometimes subtle violence of dispossession. Forcibly removed from their environment and rendered shiny, these natural rocks appeared artificial. In this way, Millar-Baker’s sculpture highlights the conventions that need to be adhered to, the compromises that must be made, the loss of identity that can occur when one has to operate according to the rules of a colonising culture.

Eschewing the ease and euphemisms of Photoshop, in his (Deleted scenes) From an untouched landscape, 2013, and (Erased scenes) From an untouched landscape, 2014, series James Tylor really did ‘cut’ geometric shapes in to black and white photographs of Australian landscapes. But there is no ‘pasting’ here, no repair of these precise incisions. Instead of covering them up the Karuna artist asks us to peer in to voids backed with black velvet.

The voids in Tylor’s photos are another forcible removal, a kind of literal violence against the image which is left unmended, symbolic of deeper wounds.

Looking into these rectangular and circular holes inevitably raises the question of what (or more to the point who) is missing from the picture?

Jonathan Jones’s video, dhawin-dyuray (axe-having), 2015, provided the soundtrack for the entire Void exhibition, a moody combination of wind, birdsong, and sparse music. In this two-channel video, what looked like mountainous landscape in silhouette was mirrored and projected on opposite walls, moving in opposite directions. Apparently this striking monochromatic terrain was actually made by filming the serrated edge of a Wiradjuri stone axe. Nevertheless, the effect was like watching the macro made micro as tectonic plates seemed to slide past each other.

And significantly, to view the work you had to occupy the void, the liminal space in the middle of the action; a tense zone filled with potential and infused with friction between past ruptures and future reparations, between what has already been done and what is still to come. As one black and white image moved forward and the other back, we in the middle (on a comfy couch provided by the gallery) were given a symbolic choice. As the sound of wind reverberated around the empty space we were asked to decide which direction we will choose. Will we leap into the void?

Void was shown at UTS Gallery, Sydney, from 25 September to 16 November 2018. Void will tour nationally starting in late 2019. 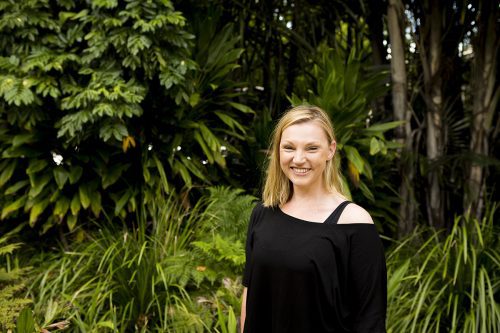 The board of the Australian Centre for Photography (ACP) has appointed Cherie McNair as the new director. She will commence on 8 February 2017.

The Redlands Konica Minolta Art Prize had its genesis in the Redlands highschool gym and has emerged as a heavyweight, with a month-long exhibition held each year at the National Art School in Sydney.