While he firmly established a specific vision for the art he wanted to make, John Nixon always remained an artist who loved to experiment and explore. During his life, more personally, he was a man who had the generosity of spirit to encourage other artists to find their own distinctive paths. Nixon, say friends and colleagues, was inspiring, generous, wise, supportive and good-humoured.

Nixon passed away this week, having had a prolific and successful career spanning more than 50 years. He leaves an extraordinary legacy, having worked primarily in painting but taking many other forms of expression confidently in his stride: printmaking, drawing, photography, publishing, live events, experimental music, film, dance and art theatre, as well as teaching and curating. He was also an impressive and clear-sighted collector of art and art-related objects.

As he told one audience during a talk a few years ago, what he mainly wanted from his work was happiness: “That’s what I want from art.” This was also what he gave as an artist, devoted to developing his favoured areas of interest: abstraction, minimalism and non-objective art.

Born in Sydney in 1949, Nixon began making art in the 1960s and attended the National Gallery of Victoria Art School in Melbourne (1969-1970). He had his first solo show at the adventurous gallery Pinacotheca in 1973, and in 1979 founded the influential and experimental Art Projects gallery, an artist-run space which exhibited friends and fellow creators including Jenny Watson, Imants Tillers, Peter Tyndall, Mike Parr and Tony Clark. Nixon later went on to become one of the country’s most influential abstract artists, representing Australia at Documenta 7 in 1982 and winning an Australia Council Fellowship Award in 2001.

Anna Schwartz, founder of Anna Schwartz Gallery, and Max Delany, artistic director of ACCA (Australian Centre for Contemporary Art) are two of many in the art world mourning the loss of Nixon. Schwartz describes Nixon as a seminal figure within Australian art whose influence was wide-reaching, often providing platforms for other artists to exhibit, publish and record. “Our communal loss cannot be overstated,” says Schwartz, currently showing a Nixon exhibition that she now sees as a dedication to the artist’s elegant experiments in non-objective painting.

Delany, by coincidence, first saw Nixon’s work at a gallery run by Schwartz (and Luba Bilu) at the back of Tolarno bistro in St Kilda in the 1980s. Called United Artists, the gallery was putting on a solo show for Nixon when Delany visited. He was impressed, and went on to work with Nixon many times – from the 1999 Clemenger Contemporary Art Award at the Heide Museum of Modern Art (Nixon was the award recipient) to 2013’s Melbourne Now extravaganza at the National Gallery of Victoria. Delany says Nixon had a life well-lived, and an art practice “that is symphonic in its beauty and resonance”.

One of Nixon’s key contributions, Delany says, has been as a key protagonist in promoting the history of abstraction, minimal and conceptual art to its rightful place in Australia, “and to redress the institutional neglect and art historical amnesia” of these fields.

“Whilst John Nixon’s methodology might be considered workmanlike, formulaic and straight-forward, and his processes of material transformation simple and transparent… he elicits a poetic resonance from the most basic and prosaic of things — such as card, board, hessian and house paint, and found objects that are incorporated into the work.”

At a community level, West Space director Amelia Wallin and the gallery’s curator Tamsen Hopkinson note Nixon’s strong connection to artist-run spaces in Melbourne. He had unique and generous ability to speak across generations. At West Space, he had a long association and was especially involved in music-related projects. “He broke down hierarchies and built community by encouraging artistic autonomy, rigour, experimentation as well as reminding us to have fun and not to take ourselves so seriously,” Hopkinson says. “His generosity and enthusiasm for art and collaboration resulted in providing many platforms for a broad range of artists, musicians and audiences. It’s hard to imagine Melbourne without him! His influence will be seen in many years to come and we are grateful for his immense contribution to our lives and practice.”

Throughout his life Nixon curated many exhibitions and performances at both artist-run spaces and larger institutions. He also facilitated many collaborations between artists, particularly through the The Donkey’s Tail, Nixon’s experimental music ensemble, which was established in 2007 and took in hand-made instruments, graphic scores, CDs, posters, abstract kinetic videos and live performances.

“John was also a collector of folk modernist studio pottery, and a modern jazz aficionado, and these forms of hand-made, free-form improvisation naturally found their way into the experimental spirit, playfulness and verve of his work as an artist and experimental musician and composer,” Delany adds.

Yet above all of this, Delany says, Nixon was a true inspiration to so many friends, colleagues, students, curators and writers, through his role as a curator, publisher, teacher, mentor and collaborator. “It has been extraordinary and unprecedented to see the outpouring of love and appreciation on social media in recognition of his role and his work. He had many close friends across generations, and was very generous with his wisdom, humour and advice.”

The exhibition Groups + Pairs 2016-2020, will remain on view at Anna Schwartz Gallery until the end of this year.  The exhibition features 116 new and existing works. 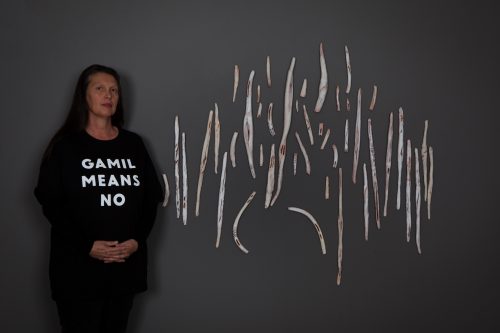