The migrant experience is topical subject matter that takes diverse forms by artists, though it’s often socially engaged and polemic. In Elena Papanikolakis’s exhibition Then, closer at ReadingRoom, however, this subject was approached obliquely – her paintings were rooted in imagery and abstraction from memories of a Greek immigrant experience but also looked back further to Greek artefacts and historic sites. Here, personal history sat side by side with ancient history.

ReadingRoom resides in the Nicholas Building in Melbourne’s CBD, consisting of two light-filled rooms, one of which looks across to Saint Paul’s Cathedral, a setting appropriate to Papanikolakis’s small-scale works that are themselves filled with an airy incandescence and European sensibility. The first room displayed three new paintings while the second held Papanikolakis’s 2018 Potential series of nine paintings with rough edges. This series stitched together memories of the artist’s suburban childhood with Greek archaeological sites and landscapes; in a background text Papanikolakis writes of her time spent working at her parents’ fish and chip shop in Canberra where she took phone orders and made signs for the front window.

One work in Potential featured a woman in a long dress with billowing sleeves, her face in profile with ‘Seafood’ written above her, recalling both the fish and chip shop, the magazines within them and the Poseidon myth. Here, sources appeared as a
palimpsest, oscillating between each other as specific images rose to the forefront at points and were obscured in others.

The three paintings hung in the first gallery, Almost Unknown, Old Ways and Shapes and Character, featured abstracted details from Greek artefacts rendered with deft lines in pale washes of paint. Presented with considerable space between them, they gave the impression of floating in space. These paintings could be viewed as a development from the previous works towards abstraction, but they sit as a sister series, working in the same vein, yet somewhat aside. They operated fundamentally as magnification: unlike her previous works, Papanikolakis’s eye is closer to her source imagery as she embedded the painting’s surface with particular energy through lines and colour.

Papanikolakis also makes collages incorporating found photography and these share characteristics with photography: they both look outward and inward. That is, they take images of the world and combine them with something from within, conveying both proximity and distance, and creating visual poetics with traces of melancholy. This quality also comes through in Papanikolakis’s new paintings that draw attention to outward sources and the surface of the painting, yet ultimately reside in a subtlety.

The title of the exhibition, Then, closer, could perhaps be indicative of these experiences as a means of ‘getting closer’ to an idea of a migrant experience, a memory, or an image, through the act of painting and abstraction. ‘Closer’, however, led paradoxically to distance. Rather than move closer, these works stood just removed, beguiling the viewer with shape, colour and form.

Then, closer by Elena Papanikolakis was exhibited at ReadingRoom from 5 September—5 October, 2019. 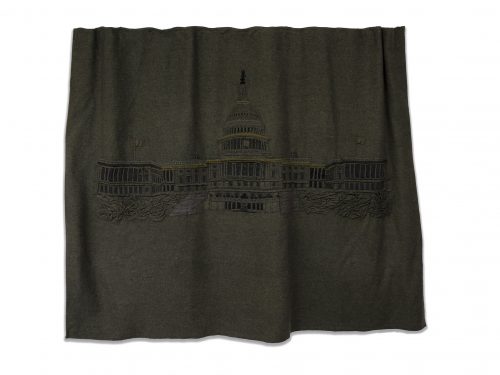 “I use green in my work often as a metaphor for greener fields,” he says. “My grandparents immigrated to Australia for this very reason. To create a better life for themselves and their children.” 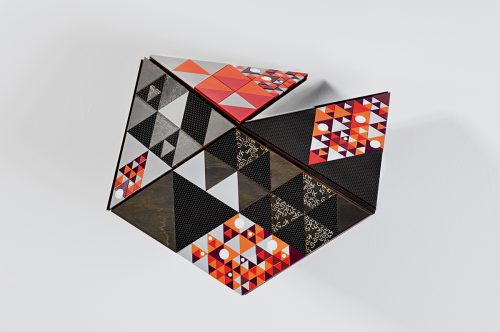 Digital code is the language of modern life, yet very few of us speak or understand it.