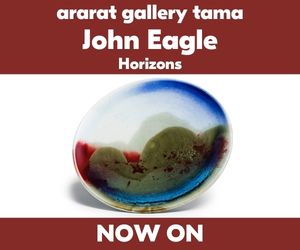 “If you can get through the conventional way of relating, then often you find that there are these meeting points of understanding,” says Vivienne Binns in our latest episode of The Long Run series featuring conversations with artists who have 60-year practices.

A pioneer in feminist and community driven art, Binns has been at the forefront of critically engaged, feminist art from the 1960s onward. While painting is her central practice, she has also worked across printmaking, performance, sculpture and drawing. It is no understatement to say that her art and activism has changed the Australian contemporary art landscape.

Binns largely grew up in Sydney and in the 1950s attended the National Art School. She became known in the 1960s for her solo show at Watters Gallery where she exhibited paintings on female sexuality and genitals. As history writes it, these images caused a controversy.

From here Binns co-founded the Sydney Chapter of the Women’s Art Movement in 1974, which was integral in supporting women artists, and has spent decades involved in many community art projects, as well as continuing her own painting practice. Alongside exhibiting at national and international institutions, as an educator Binns has been integral in mentoring generations of artists, and in 2021 was the recipient of the Australia Council Award for Visual Arts.

Binns talks about her childhood, and in particular her mother and the importance of women’s domestic work, as well as her time at art school. We also talk about Vivienne’s long-standing inquiry into what art really is, and how this links to her own thoughts about womanhood and sexuality.