In one filmed performance, the late British-born Australian pop artist Pat Larter is naked with high heels, her body painted, and she is walking through bushland. A dog happens to amble past. So too does a child.

“It’s very home-spun, making what you can, where you can,” laughs Lisa Catt, assistant curator of international art at the Art Gallery of New South Wales, speaking of the film in question.

The two homes Larter shared with artist husband Richard Larter and their five children—first in Luddenham in the hinterland south-west of Sydney, and later the town of Yass in the New South Wales southern tablelands—often featured in her art.

Domesticity and family life were as important to Larter as her theatrics and burlesque humour; she lived in fringe locales where provocative ideas could be fulfilled away from too many prying neighbours.

Now these performances have been uncovered. In a “first look” of the extensive archive of her work that Richard donated to the gallery in 1999 (she died of cancer at age 60 in 1996; he died in 2014), Catt and senior librarian Claire Eggleston have found documentation of more than 90 Larter performances.

“That makes her a major Australian performance artist, yet she’s not in our art history narratives,” says Catt, as AGNSW prepares Larter’s first institutional solo exhibition. “So we’re really hoping this exhibition continues to consolidate her place in Australian art history.”

Born Patricia Florence Holmes, the artist came from a poor London family. On her first day as an office junior at a marine surveying company, at the age of 15, she met Australian-born Richard Larter. He was several years older, working as a trainee surveyor.

They married in 1953, when she was 16. In 1962 the pair came to Australia to escape class-bound Britain, with three children in tow, only to find a similar stuffy conservative culture in the antipodes. Two more children were born here.

Larter was the subject of much of Richard’s work, dressing variously in maid, schoolgirl and stripper outfits. Together, the Larters railed against censorship of the era.

While Richard acknowledged how important Larter was to their work, it was only he who gained institutional recognition. Yet Larter too was amassing a body of performance, video, photography and, later, painting.

She became part of the anti-establishment mail art movement: ephemeral art on postcards. She coined the term “femail art”, using children’s stamp sets that made sly use of puns: “Self Exposure”, “Mamaries” [sic], “Oh Pun Legs”. Much of her output challenged conventions of the male gaze and stereotypes of female sexuality and desire.

Larter “engaged with the tropes of pornography”, says Catt, “so her explicitness in her art was definitely a way of confronting and causing us all to confront the kind of taboos that are around female sexuality and desire. She took agency and control of her body, and the way that her body was represented.”

Larter had her first solo exhibition in 1992 at a private Redfern gallery and was part of group shows. “It’s taken the institution a while to catch up to what was going on,” says Eggleston, who calls the archive “incredible” and “huge”, filled with screen prints, mail art, paintings, collages, and experimental films on Super 8 and Betacam video that have now been digitised.

There are two reasons it has taken so long for Larter to gain institutional recognition, explain Catt and Eggleston. First, her role in Richard’s work was often misunderstood or underestimated. Second, living and working on the fringes at the time, she was not making the type of art that particularly found favour, at least back then, with collecting museums.

“She’s definitely always sat outside an institutional framework,” says Catt. “Most people know Pat from Richard’s portraits. She’s been read into art history as a muse and a model. [But] you realise she was a very active agent in Richard’s practice, and they were these life-long collaborators.

“They made work with each other, and for each other, and alongside each other. It’s not just as simple as saying she was Richard’s muse. The depictions of her in Richard’s portraits can be seen as the beginnings of her performance practice.”

But was Larter ever critiquing her husband’s work and his gaze through her own work? “Maybe later on, when she started her painting practice,” says Eggleston, noting how the artist began to photograph male models, incorporating them into mixed media painting.

“The idea of flipping the gaze—the gaze that had been on her—is definitely there. [But] they were both highly political, very anti-censorship. The idea of sex being out in the open between consenting adults, people being in control of their bodies and image, was very much a part of their work.” 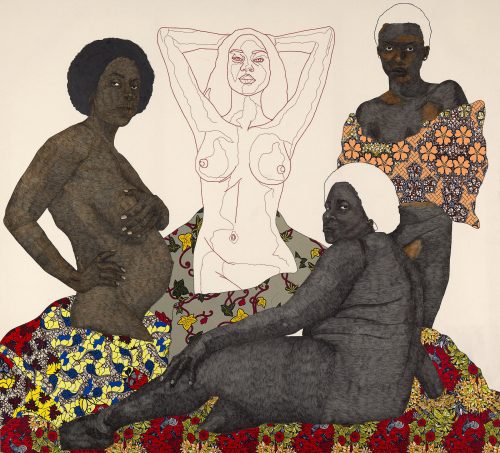 Good news for Melbourne with the National Gallery of Victoria (NGV) announcing today that the NGV Triennial is due to open on 19 December.