When I heard that the title of the new hang of the White Rabbit collection was The Dark Matters, I immediately thought it was the perfect opportunity to drag out Xu Zhen’s dark gothic confection, Play 201301, 2013. All chains, whips and studded black vinyl, this enormous architectural sculpture resembles the unholy lovechild of an S&M supermarket and an inflatable castle.

White Rabbit is Judith Neilson’s private horde of 21st-century Chinese art, and while her funds may appear to be virtually unlimited, her collection is not.

So the reappearance of favourite works is something visitors can look forward to. But alas, on this occasion it was not to be. Xu Zhen’s bondage bouncy castle would have set the mood for cheeky black humour. Instead, The Dark Matters opted for monochromatic elegance.

Which is not to say that the show is entirely devoid of colour. I started, as I always do at White Rabbit, at the top and worked my way down. And when the lift doors opened on level three I was greeted by Huang Po-Chih’s, Flov”er 2006, a deliberately glitchy video fairly bursting with oral colour. Shot in deep chiaroscuro, his owers seem to writhe and dance, only to be obliterated: smeared into elongated streaks of colour against a deep black void. It’s almost a memento mori, but the pace is too frenetic, the soundtrack too jarring, to really invite contemplation. Nevertheless, Huang Po-Chih’s jerky ballet of doomed owers is compelling.

Next door, in Grinding, 2013-2016, Yang Mushi presents an array of blacked wooden objects arranged obsessively into taxonomic groups of unknown provenance.There is a slight menace to the work. It elicits the chilling sensation of a sci-fi thriller, an effect no doubt thoughtfully exacerbated by the shiny white gallery. With its low ceiling and reflective floors this space resembles the cleanroom of a mad scientist, an illusion that is only slightly spoiled by the eight bright yellow chairs made available for gallery visitors who might need a wee sit-down.

Level two was decidedly dark. Xu Zhen does make an appearance here via his black painting, Under Heaven 0302VS0137, 2013.
It might not have the same dramatic air as his chain strewn, monolithic sculpture, but this painting still has a certain cheerfully camp aesthetic. Its heavily textured surface has been created by applying paint through a piping bag and star-shaped tip, a technique usually reserved for putting icing on fancy cupcakes.

It may be all black, but Xu Zhen’s monochrome is about as subtle as a bedazzled bedspread. Its super shiny, hyper-textured blobs bounce light in crazy bursts, like all the best bling.

The highlight on this floor, perhaps of the show, is Yang Yongliang’s animated digital drawing, Infinite Landscape, 2011. This subtly moving work is a contemporary version of a traditional Chinese landscape. But the impossibly pointy mountain peaks in Yang Yongliang’s video are bristling with cranes and they loom over a metropolis that is spreading inexorably, driven by rapacious greed.

In fact, close inspection reveals that the mountains themselves are just tightly clustered high-rise apartments. Yang Yongliang’s landscape is no longer a manifestation of the nature/culture clash. He pictures a world in which this age-old battle is over and the only nature left is the animal known as man.

The work on level one is literally lighter. In fact, several pieces actually utilise light. In Sun Lei’s sculpture, Clarity, 2009, the transparent contents of an equally see-through suitcase are strewn across a lightbox. Nick Dong’s sculpture, Cosmic Dance – Gravity, 2015, presents explosions of light, mimicking mini-reworks. And in Wu Chi-Tsung’s wall piece, Crystal City 007, 2015, an illuminated metal arc slowly swings from side to side, causing the shadows cast by clear Perspex blocks to elongate and shrink in repetitive cycles.

Overall The Dark Matters seems less like a meditation on the dark things that actually do matter (although some artists do delve into this territory) and more like an exercise in good interior decoration. It is visually very harmonious. After all, there’s nothing quite like removing most of the colour to make sure nothing clashes. And a monochromatic palette is also a simple strategy which ensures that what little colour is left really packs a punch.

The Dark Matters is at White Rabbit, Sydney until 30 July. 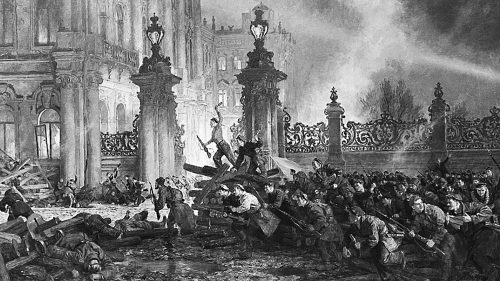