The Contiguity of Totalisation is a multimedia exhibition by three queer artists (Tarzan JungleQueen, Matthew van Roden and Koulla Roussos) that is currently showing in Ballarat as part of the 2018 Biennale of Australian Art (BOAA). Curator Koulla Roussos says that the title is a paradox: contiguity refers to the state of bordering, of being side by side, while totalisation requires unity.

On arriving in my hometown I send Roussos a message and she responds with characteristic aplomb. “I just have to buy and install a TV,” she says. “Be there in half an hour.” At the last minute, she explains later, she asked the proprietor of the Unicorn Hotel if they would show the film on a flat screen set up on their counter to maximise its exposure. While I wait, I show my 92-year-old grandmother the limited-edition catalogue, which describes “negotiating queer identity as a dynamic discourse and process.” She nods slowly and declares that she will go with an open mind. Then she laughs and says, “What’s Tarzan’s real name?” After an estrangement of 20 years, wrought by my troubled mother, we are reconnecting. She has my mother’s turn of phrase and an almost identical bookshelf.

The Biennale opening party is held at the Mining Exchange, a heritage building which my grandmother tells me was used for the trading of shares in mining companies during the gold rush.

I am fascinated by this glimpse of a historical town reduced in my memory to annual school excursions to Sovereign Hill. Roussos leads me across the road to view the exhibition of still images displayed in light boxes in Unicorn Lane Gallery. The black and white portraits show the three artists in different configurations: JungleQueens’s head superimposed onto van Roden’s body, Roussos’ face smeared with clay, JungleQueen preparing to devour a tiny van Roden on a spoon. The images are taken from a seven minute long black-and-white film, made by the trio over a nine-month period, in which the artists explore their identities as queer subjects in a loose narrative which the three describe in fascinatingly divergent yet overlapping terms. Film is the ideal vehicle for an exploration of fluidity. The moving image shows the body transforming as it explores possibilities. The decision to exhibit a collection of still images from the film plays ironically with the idea of fixity.

The following night, a small crowd gathers at St Andrews Kirk beside a van selling wine and beer. Underdressed, I stand shivering as I watch the artists’ delight at seeing their film on a giant inflatable screen in the churchyard.

The Contiguity of Totalisation draws heavily on the gothic and horror genres and calls to mind early works of German expressionism like Nosferatu and the Cabinet of Dr Caligari.

Shot with green screen, The Contiguity of Totalisation isolates forms against a black background, opening with two humanoid figures emerging from a bathtub. The naked artists are then shown seated on plinths. Roussos appears smeared with clay – the stuff of creation – and screams primally. A scriptural passage appears within van Roden’s naked body and JungleQueen proceeds to eat him, his body reduced to a tiny figure and shaking convulsively on a spoon. JungleQueen’s breasts are wiped away as van Roden’s body appears in their place in what could be seen as a rebirth. It’s apt that the main screening of the film is in a church. Van Roden does not believe in grand narratives, he says, but in the unfolding of endless possibilities. He scored the film with a hymn written using an ascending scale of major lifts and played in reverse.

At the Unicorn Hotel, the film injects its bold queerness into the domestic setting of a Sunday family brunch. We gather around an outside table and Roussos tells the others that this afternoon I am taking her on a personal tour of Ballarat– a tour of my childhood. It was in this town that I first encountered the rigid separation of individuals into male and female. It was on a rural property bordered by state forest to the west of the town with only my mother for company, that I grappled with the earliest questions of identity, truth and religion.

Roussos and I leave the group and drive out to Smythesdale. I point out sites to her as we drive through the tiny town. That’s where the old general store used to be. That’s where I saw a snake.  That’s where I made a phone call to the electricity company as a ten-year-old, making excuses for the unpaid bill. When we reach the property, I don’t even recognise it. The grass has been cut and a fence put up. I lead her into the adjoining nature reserve and we look across at my old house. A tractor is parked beside it.

The resolution of childhood preoccupations is a recurring theme in The Contiguity of Totalisation.

Van Roden’s religious upbringing is playfully embodied as a piece of religious text appearing within his naked body. Of their morphing body scene, JungleQueen says, “It was a fantasy I’ve always had. Having a breast-less chest. So it was amazing to have that fantasy come to life, without the need to do it in real life.” Roussos reflects that for her, the struggle for identity has been about being a Greek, a barrister and an artist, and reconciling the different hats she wears. The art-making process has made this easier. “I’ve even shown my mother. ‘It’s το υποσυνείδητο,’ I told her. It’s the subconscious.”

Part of the success of The Contiguity of Totalisation is that the images are resurrected and reconfigured in different exhibition spaces around Ballarat. In observing the fluidity of the art we witness the endless possibilities of which it speaks: the self excavated from foundational texts, primal impulses, lifelong preoccupations. 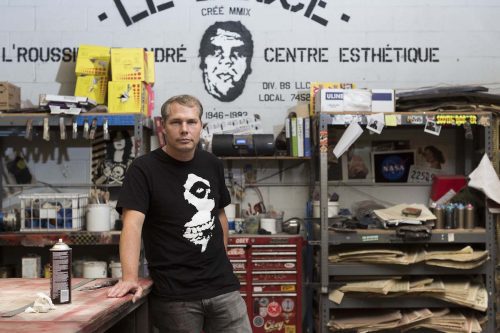 Cultural empowerment, artificial intelligence, the music biz, the ethics of criticism and the quest for perfection: these are just a few of the topics being explored by Vivid Ideas 2017. 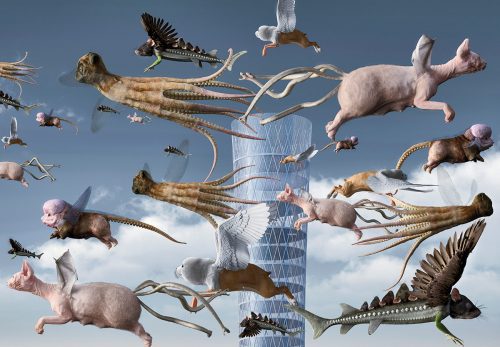 Philosophically speaking, the real is unchangeable, authentic truth. Hyper Real at the National Gallery of Australia challenges that assumption.