Japan’s Chiharu Shiota is famed today for her monumental webs of red, white or black yarn, grand sculptures and performance art. But it was her first trip to Australia that fashioned this signature artistic language. Her career had almost been nipped in its infancy during her second year of art school, when she abruptly stopped creating: painting ceased to have meaning, so Shiota lost her way.

Offered the opportunity to come to Australian National University School of Art in 1993–4 as an exchange student, Shiota again struggled. But here she had a dream she was inside a two-dimensional painting, fighting to breathe, lodged between the weave of the canvas and the red of the paint. Awake, she donned a canvas-like robe and tipped red enamel house paint over herself, like a primal scream that might exorcise the limitations of her chosen medium.

Shiota had to stop the performance after 30 minutes, because the toxic paint was burning her skin.

But the act was freeing, and she then went looking for a material that was her own language, threading acorns from black string inside and outside the Canberra art school. And so began Shiota’s thread installation practice: black yarn to signify the infinite cosmos; red to symbolise blood or relationships between people; and white for purity, which is also associated with death in Japanese cultures.

Born in Osaka in 1972, Shiota creates psychic spaces both cathartic and unsettling for audiences, evoking displacement and the memory of people not long absent. She would add found objects such as shoes, dolls and even a scorched piano, the instrument she had played as a child. Her most widely celebrated work, The Key in the Hand, representing Japan at the 2015 Venice Biennale suspended 55,000 used keys from red threads, symbolising lost aspects of people.

For the 20th Biennale of Sydney in 2016, she created Conscious Sleep, an installation of vertical beds tangled in black yarn that recalled the prisoners who had slept in the colonial jail housed in a sandstone building on Cockatoo Island. Ignoring mentor Marina Abramović’s advice to abandon string practice because of its overfamiliarity, Shiota doesn’t want to make rational statements but instead create an emotional impression.

Now working in an 800 square-metre studio in Berlin, Shiota is returning to Australia for her first major solo exhibition in this country, at the Art Gallery of South Australia, which will include a specially commissioned new work, Absence Embodied, involving a great deal of red yarn strung through the historic Melrose wing, the details yet to be fully determined, as Shiota spends three weeks filling the room.

“Her work has an embedded sense of memory and emotion,” says Russell Kelty, the gallery’s associate curator for Asian art.

“It’s this connection with the ordinary, mundane objects of life that are imbued with an emotive sense and a personal journey that she weaves into these installations.” Leigh Robb, curator of contemporary art at AGSA, calls Shiota’s work a “phenomenological encounter”, engaging audiences as they move through a space: “She does say she feels her installations are completed by the audience.” The curators agree there is an “underlying pathos” in her artwork.

When Shiota goes into a space, “she tries to become zero, which is exceptionally difficult”, says Robb. “She tries not to think about anything and go beyond normal life.” Shiota listens to Wagner and designs theatre sets, lending her artwork an inherent theatricality. “Most of her friends are performers and directors and producers,” says Robb. “There is a real sense of dramaturgy and stenography in her work, because she has to be acutely attuned to the architecture, the nature of the space.”

Shiota is shy and understated in person and prefers to keep her studio free of outside images. Her parents are Buddhists, but the artist has described herself as not being religious. “Obviously living in Japan until her mid 20s, she would have been to funerals in Buddhist temples and Shinto shrines at New Years and have at least a vague understanding of the ritualised cultures of both,” says Kelty.

“There’s always a danger in connecting directly [to religion], but she obviously derives some inspiration from Shinto, and possibly from Buddhism.

One thing you can say is the Japanese for centuries have been spectacular makers of things with the hands. Her room installations are masterpieces of working diligently for long hours.”

The exhibition at the Art Gallery of South Australia will look back at Shiota’s transformational moments via drawings, photography and video of performances. The specially commissioned installation itself will stay on display for two to three years, says Kelty: “It’s a huge undertaking for the gallery, as well as an iconic moment for her as an artist. She’s on this fantastic arc, and we’ve just caught her at the right time.” 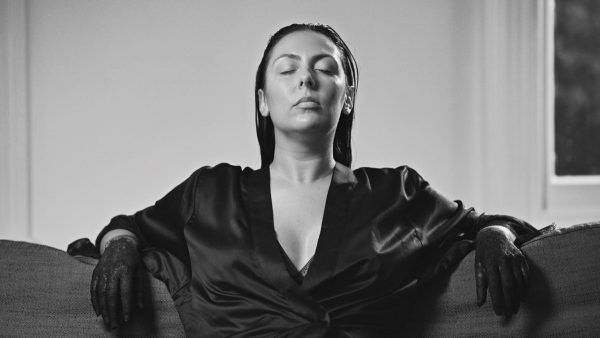 Ceremony and radical activism may seem like differing forces, but The 4th National Indigenous Art Triennial is showing us otherwise, centering itself on art, action and change.