Artist Katthy Cavaliere achieved much in her short lifetime. Prior to her premature death in early 2012, Cavaliere had maintained a practice spanning photography, installation, video and performance. Her work was deeply marked by the themes of memory, loss and personal history, and she had honed her performance style studying under Marina Abramović. The year she was diagnosed with the same cancer that had taken her mother several years earlier, Cavaliere’s video performance Loved, 2008 was shown at the 54th Venice Biennale in 2011. It is clear Cavaliere still had more to give.

Cavaliere was born in Sarteano, Italy and migrated with her family to Australia when she was four years old.

Left with little memory of her birthplace, the experience of a lost childhood was a pivotal influence for her future work as an artist.

In an interview with Beat magazine’s Liza Dezfouli in 2016, Cavaliere’s close friend (and director of programs at Sydney’s Carriageworks) Daniel Mudie Cunningham revealed “Katthy’s entire life was an installation… [where] the boundaries separating art and life dissolved.” Finding significant meaning in items like toys, furniture and clothing, Cavaliere compulsively collected and arranged objects, transforming them into conduits for memory and absent narratives. Wherever she travelled, Cavaliere engaged with place and objects to symbolically unpack stories of love, trauma and history.

In May, Goulburn Regional Art Gallery (GRAG) is displaying photographs and a video performance from Loved, one of Cavaliere’s best known works, from their permanent collection. Hannah Gee, programs and exhibitions coordinator at GRAG elaborates on the Cavaliere pieces in their collection and their connection to Goulburn: “Living Rag Doll, 2004, is a performance work recorded live at Tony’s New and Used Furniture in Verner Street and Gaze of the Masked Philosopher, 2004, is a photograph capturing the view of Goulburn through the eyes of our Big Merino,” says Gee. “These works were created in response to our locale and were accompanied by Suspended Moment, a survey of the artist’s work presented at GRAG in 2004.”

Often engaging with sites of personal and communal importance, when Cavaliere began her residency in Goulburn she explored places connected to the town’s cultural identity.

Towering over the terrain at 15 metres, the Big Merino was an unavoidable icon. A robust structure fondly nicknamed Rambo after a stud ram on a nearby farm, the iconic landmark is constructed from steel, wire and concrete. Climbing inside the Merino’s head and looking through the openings of its eyes, Cavaliere became interested in the view that filled the Merino’s gaze. During an artist’s talk at the Art Gallery of New South Wales in 2005, Cavaliere revealed how her photograph, Gaze of the Masked Philosopher, 2004, coincidentally linked back to Italy. “[The Merino looks at] a view of Goulburn and in the distance are two wool stores; from one, wool is exported to Italy for making fine Italian wool suits.”

During her time in Goulburn, Cavaliere also produced Living Rag Doll, 2004. Recalling the toys  and childhood items she worked with in earlier performances Katthy’s Room, 1998, and Story of a Girl, 1999, Cavaliere dressed as a life-size doll, with a felt mask and thickly braided woolen hair covering her head. For one performance only, Cavaliere was propped up on a secondhand couch, remaining motionless as curious visitors interacted with her. Kids tugged Cavaliere’s woolen hair and hugged her limp body while adults started an auction to give her a price tag. When the performance concluded, Cavaliere remained in character until each visitor left the store and she was alone once more.

Several years after leaving Goulburn, Cavaliere lost both her grandmother and mother within the space of 15 months. Created at a time when Cavaliere’s mother was becoming progressively ill, Cavaliere’s video performance, Loved, explores how objects can provide tangible links to our past.

Performed at Sydney’s Artspace and subsequently purchased for the GRAG collection, Loved depicts Cavaliere as a tap-dancing doll moving to the sounds of her mother singing ‘Hello Dolly’. Once the dance is complete, Cavaliere sits on the floor and knits long ropes of colourful wool, evoking the comfort sometimes found in repetitive tasks. A palpable sense of loss weighs heavily on Loved, as though Cavaliere is compulsively trying to knit her way back to her mother.

Looking back over Cavaliere’s oeuvre, loss is a consistent theme. Yet so is redemption – achieved through the performative acts of shedding personal belongings and recognising how love is captured in seemingly mundane items. The desire to recreate or discard elements of personal experience coupled with the theatre of Cavaliere’s own life has inadvertently resulted in an artistic legacy fortified with raw honesty. Daniel Mudie Cunningham sums up the essence of Cavaliere’s practice. “The story of Katthy’s work is the story of the eye. Fixated on life as it is seen through a peephole or lens, Katthy presented the world – her world – as an inverted looking glass, reflecting back a life lived inside out, back to front and upside down.” 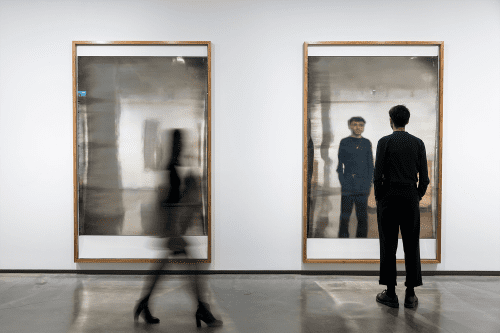 I’ve always approached Primavera, the MCA’s annual showcase for artists aged 35 years or younger, less like a novel and more like a box of chocolates. In other words, rather that looking for a clear narrative I enjoy dipping into a mixed bag of treats. 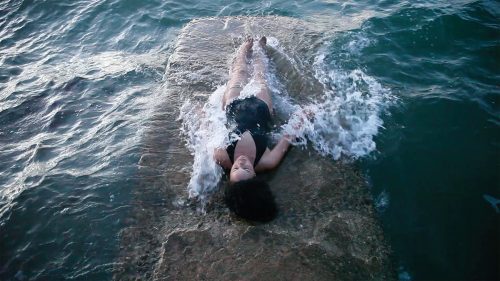 Angela Tiatia’s work resonates with bravery and energy – in Holding On, she pits herself against the forces of nature.