Sharks are a flashpoint in the Australian psyche. Blake Chapman’s article in The Conversation noted the “perfect storm of conditions for serious shark attacks” is in Australian waters. These conditions include our love affair with the ocean, the diversity of the sharks that inhabit our waters, and that the most deadly species — white, tiger and bull sharks — are all part of our marine habitat. Yet what is more pressing, when the adrenalin subsides, is the endangered status of sharks, their crucial function in the oceans, and their little understood importance to Aboriginal and Torres Strait Islanders and other cultures all over the world.

In Shiver, curator John Stafford notes that the shark has little profile in the history of art. In this exhibition, which he describes as “a curatorial sketch”, he advocates for art which allows us to move past fear and emotion toward understanding the sharks in our oceans. He notes, “In truth, Australians are at greater risk on land than in the ocean. More of us will experience road accidents and heart attacks each year, but we accept the risks of driving vehicles and making personal choices about diet and exercise. Globally, more people die each year taking ‘selfies’ than from shark attacks.”

This exhibition draws on work by contemporary Australian artists from a variety of cultural backgrounds to open up the narrative about sharks.

Stafford says, “A number of these artists, especially the Aboriginal and Torres Strait Islander artists, associate spiritually with their shark as a totem and part of their cultural cosmology, while other artists highlight species protection.” Leah Emery’s The Beast and Beauty, 2019, notes the change in attitudes to the killing of sharks (as a trophy sport) in her embroidery of a huge shark, strung up with a swimsuit-clad woman dwarfed beside it. Daniel O’Shane is from the Torres Strait and his vinyl-cut print Beziam, 2014, captures the sinuous strength of the shark in the water in pursuit of the turtle.“This print reminds me to be cautious when jumping for turtle”, he says.

Pamela See is of Chinese descent and her work, Jelly for Dessert, 2019, explores with humour the Chinese tradition of shark fin soup and jellyfish salad, with a diver hunting a shark with chopsticks – the roles of predator and prey are interchangeable. Elysha Rei’s Grate White Shark Skin, 2019 uses hand cut paper to reflect her Japanese heritage where shark skin, which has a sandpaper-like quality, is used to shred wasabi and, traditionally, as a handle-cover for the Samurai sword. Deb Mostert looks to science in her chart titled Shark as Object, 2019, which places the Great White at the top and devolves to Disney versions at the bottom.

As summer begins, this shiver of sharks assists us to enter the ocean with greater awareness and understanding of who is the Apex Predator, 2019. Kevin Finn’s t-shirt art, marked with these words, is designed for people. 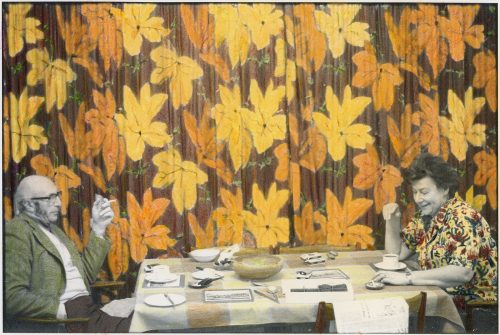