A fascination with distorting the grid underpins both current exhibitions at Flinders Lane Gallery: Zero Zero Zero by Richard Blackwell and Particle Fever by Dion Horstmans.

Both Blackwell and Horstmans engage with the legacy of Modernism in which the grid represents the shift away from art reflecting everyday banalities and towards art that referenced its own principles: shape, form, line, colour. The concept of the grid as an abstract plane of thought has evolved neatly into the world of the digital where, from the matrices of coding to the square pixels of user interfaces, a binary structure holds the world together.

Horstmans makes his energetic forms 3D using welded steel rods or flat glossy acrylic and ply. Some, Particle Fever 1 and Particle fever 4 for example, clearly share a similar genesis. Either flat against the wall, or nearly-so, these constructions privilege the illusion of depth and movement, each one a 3D freeze-frame pulled from a sequence of continuous unfoldings and contractions: a particle dance. The two-tone gradients of the sculptures, combined with their slanting lean (it’s as if a mouse has clicked and pulled the top-right corner), remind me of learning to manipulate shapes in early Photoshop.

While Horstmans’s Particle Fever only hints at the digital matrix, Blackwell’s Zero Zero Zero attempts to grasp it.

In his Space Frames series of relief prints, Blackwell takes an image of construction scaffolding, a 3D grid, and twists it. In Field, he projects a grid over topographies and captures the result in black steel. Triangular constructions rupture the grid in MRS3 1.1 and MRS3 1.2 suggesting a formal binary in marble. In X, Y, Z, three giant black zeroes have been carved with ribboning op-art lines. I can imagine that their genesis involved a series of concentric circles digitally squeezed into a zero-shaped box. The flat laminate surface gives the illusion of bulges, of folding in on itself; it reminds me of corseting.

Turning a digital grid into an illusion of fabric brings us full circle through history, because cloth, of course, is a grid of the oldest kind: horizontal and vertical lines overlaid to create a flat plane. Working within the binary structure of warp and weft, textile makers long before Modernism have experimented with illusions of pattern, geometry and form, producing a surface that can fold and wrinkle; a form that clings to bodies rather than eschewing them (as the Modernists might have preferred).

Weaving is also a direct connection to the digital: the binary punchcard system of the Jacquard loom was an early forerunner of computer programming.

In the 21st century, the virtual and flesh worlds are essentially enmeshed, their strands forming a plane in which we are embedded as the surface pattern.

It’s this plane that Zero Zero Zero in particular seeks to open up, to morph and bulge; although Blackwell’s work remains codified within a hard-edged materiality. Both Zero Zero Zero and Particle Fever present engaging explorations of the grid, that ancient form that scaffolds our world. 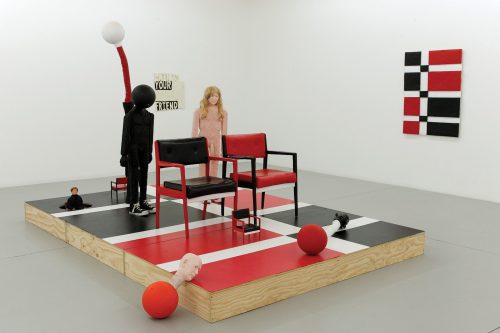 A cast of different ‘Ronnies’ populate Ronnie van Hout’s art, appearing as the wizened face of inanimate objects (a banana, a sausage, a hammer), as well as the adult visage of child-like figures engaged in disconcertingly adult acts. Here, Ronnie tells us about five of his works.