Sam Field’s paintings are like colonialist postcards from a post-apocalyptic Australian landscape. His terrains are assembled by combining national logos and images – from vintage Channel Nine logos and football teams, to Blundstone boots and lyrebirds.

Field’s exhibition Have One on Me blends semiautobiographical elements with visions of colonial history, recycled through a youthful lens that is both derisive and heartfelt. He describes his images as “neo-history paintings” and in Have One on Me, Field visually prods colonial settlements, migration and the myth of Terra Nullius, a term meaning ‘nobody’s land’ wrongly applied to Australia by the British Government in the 18th century.

Possessing a choppy style of oil on panel, Field attacks his thick surfaces with painterly scrapes and brushstrokes, which spread across canvases with the burnt orange and red hues of sunburn and desert dust. “The paintings are nascent forms full of colour and energy which are built up with multiple layers,” he explains. “Quite often I have no idea what I’m going to paint until I get about four or five layers in. If something isn’t working, I turn it upside down and start a new composition directly on top of it.”

Throughout Have One on Me, Field subtly references detention centres and the refugee crisis, exposing the stark parochialism behind the idea of Australia being a nation where freedom is valued. “Asking refugees to be grateful for being allowed to stay in ‘our’ country is like a friend saying they’ll shout dinner, only to find out they’re paying with their boss’s credit card,” says Field. “That’s essentially the whole point of the show – to document the pervasiveness of human fallibility through Australia’s history.”

This article first appeared in the September/October issue of Art Guide Australia.

Slipping between questions of constructed identity and culture, the agenda proposed by South/East Interference Vol. 2 is a bold and critical one. 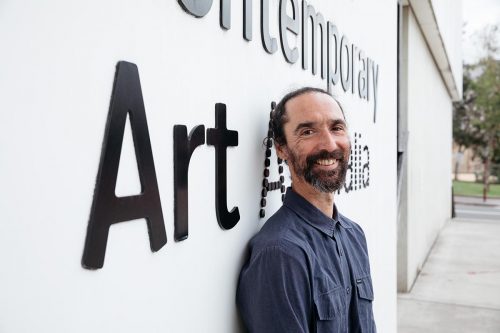