From a studio immersed in the blue gum forests of northern Sydney, Ruth Burgess creates multi-block woodcuts and engravings detailing the complex patterns and shadows found within the rainforest microcosm. With an artistic career spanning five decades, Burgess has been an instrumental force in the Australian art world – from sourcing comprehensive collections of woodcut prints for the Art Gallery of New South Wales (AGNSW) to engaging in multiple cultural exchanges to work with master artists in China. In her new body of work, The Music of the Planets, Burgess looks beyond the forest to take on the macrocosm, imaginatively conjuring the depth and colours of space. Briony Downes spoke to Burgess about the inspiration behind her new work and her love of music and poetry which has remained an integral part of her practice.

Briony Downes: Can you talk me through what the viewer will experience in The Music of the Planets?

Ruth Burgess: It’s a large exhibition of woodcuts, some in colour and some in black and white. I have been inspired by Johannes Kepler – a 17th century German astronomer who played a part in the discovery of planetary motion, and the connection he believed it had to harmony and music.

When I was researching this show, I came across recordings on the internet of actual sounds emitted by the planets, the sounds Kepler first described in his 1619 book, Harmonicus Mundi (The Harmony of the World). The sounds are like an extraordinary resonance of different tones. Johannes was an amazing astronomer and I believe early scientists often had to have great imagination to carry forward their discoveries.

The woodcuts in The Music of the Planetsare imagined expressions of galaxies, stars and space. Most of the images are abstract. I’m not a scientist and I don’t know a lot about astronomy, so it’s more of a poetic approach to the subject.

The Music of the Planets is also influenced by images transmitted by the Voyager spacecraft as it breaks through areas of space and reveals all these extraordinary colours. NASA used to publish regular reports of Voyager’s travels and I was able to access these, and also images from the Hubble telescope and the space station. The Milky Way fascinates me too. Images from space are such extraordinary visuals.

BD: Poetry is part of the exhibition and informs some of the images. How do they relate?

RB: I’ve written six poems and they will be shown around the gallery. Some of the poems are used in the titles of the work. At university I was involved with two poetry groups, but I let it go for a long time. When I was creating this body of work, I went back and wrote these poems; they just happened. They are short poems about the planets and space. The one I like most is about Voyager and the infinity of space, how we are just circling the sun and really unaware of the wonder out there.

BD: You initially trained as a musician. How does The Music of the Planets connect to your lifelong interest in music and visual arts?

RB: When I was young I traveled alone to France and studied at the Conservatory of Paris. At the time, I was very interested in musical composition and contemporary music but in Australia they were still playing classical music. The type of music I was studying in Paris hadn’t been accepted here yet so when I brought my compositions back to Australia, people really didn’t understand them, and musicians wouldn’t play them. As a result, I turned to the visual arts. There are a lot of correlations between rhythms and harmony in visual art and music.

BD: Nature – particularly the forest – is an ongoing theme in your work. What compels you to keep returning to the forest

RB: The forest environment is both simple and complex. Where I live there are enormous Sydney blue gums. They are the great verticals, but then there’s all the undergrowth complexity of birds, insects, leaves and branches.

It’s not easy to see the sky where we live so I have to imagine the stars. We only sometimes see the moon. This complexity suits my way of working from dark to light, especially when I do wood engraving which is created in black and white with very fine tools.

BD: Throughout your career you have traveled many times to China, working with artists there and later developing collections of Chinese woodcuts for the AGNSW. What are some of the memorable moments that have stayed with you from these experiences?

RB: Early on I was selected by the Print Council of Australia to attend a symposium in northern China. Woodcut artists from all over China were there, as were art critics and historians. Every province had a woodcut association and a lot of the people I met at this symposium became close colleagues and friends. They were a different influence away from the Sydney art world where printmaking isn’t always seen as a major genre.

I went back to China on cultural exchange several times and was there before and after the 1989 Tiananmen Square protests, meeting with artists under house arrest. Some became influences on my work, particularly Xu Bing. He used calligraphy as a way of rebelling against the Chinese government and created enormous abstract patterns with it.

BD: With such a wealth of experience behind you, how does it all come together in The Music of the Planets?

RB: Because I’ve worked for so long now, I don’t consciously control the process of making. I have the woodblocks which I cut, and I hand print with mats and spoons. I choose the colours, a concept and print the blocks dry on wet or wet on wet and then they work together. They do part of the work. It’s just from experience that I can let it happen. It’s about leaving your mind clear. 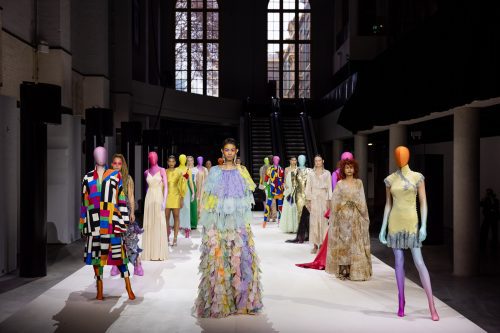 The NSW Government has committed $480-$500 million to renew the Powerhouse Museum Ultimo as the centre of a design and fashion hub.