The honeymoon was already over at The Honeymoon Suite, with wandering hands during its inaugural show, Rose coloured glass. For the exhibition at the new temporary non-profit gallery in Brunswick, four artist couples offered works meant to demonstrate their dynamics as artist couples. Instead of collaborating outright, all eight artists contributed their own separate works, leaving the audience to tease out the invisible collaborations that inform their practices.

There was some pleasure to be drawn from the tidy monogamous couplings, which were spread across the gallery and office spaces, sometimes together, sometimes apart.

Caleb Shea’s sculptures and Hannah Maskell’s grid formations huddled in a corner, whispering conspiratorially about line, form and plane, while the exuberant colours in Masato Takasaka’s self-appropriated paintings and Madeline Kidd’s adorned mirrors shouted out to each other from across the room. In matching plain paper, Alicia Frankovich and Alex Martinis Roe’s works canoodled side by side, whereas Andrew Browne’s photographs and Martin Harris’s paintings ached with distance, sundered by different mediums and different rooms.

Without prior knowledge of who’s dating whom in the Australian art world, a viewer would have struggled to identify the couplings based on the works on display and the exhibition layout alone. Perhaps this was the point. Still, one couldn’t help but feel short-changed over an insight into the inner workings of contemporary Australian artist couples.

That said, it was all just as well. The true joy of the exhibition wasn’t in the implied behind-the-scenes of the couples, but in the frenzied orgy that took place right beneath your feet. Things got messy. Off went Takasaka and Roe into their respective corners, the former’s recreations of paintings completed in high school and the latter’s excerpt from a document outlining the process for a previous project both sharing onanistic inclinations. Something was definitely going on between Frankovich’s erratic, ECG-like lines and Maskell’s grid-bound, ten-hut lines, with neither as orderly nor disorderly as intended. Amid all the mayhem, Shea’s Untitled (Tall thin stack gradient yellow) and Untitled (Solid stack gradient), both 2016, appeared to idle in the space, awaiting the results of a paternity test. Could the mother have been Kidd? He had her yellows.

To take a cue from the title itself, the lens of individual relationships is a rose-coloured one. What’s more, the prescription skews myopic. While there might be particular resonances within couples, the partners are part of a larger, more complicated web of a community. That’s not to say that everyone is sleeping with everyone: relationships are primarily about intimacy, and there was a sense of a broad shared intimacy at work here.

This is no failing on the part of the exhibition. If anything, the positioning as an artist-couple show was a feint, a bait-and-switch that allowed something more complex to unfold from a simple premise. Without that positioning, there would have been no sense of surprise and discovery. Strictly speaking, the honeymoon may have been a bit of a free-for-all, but the relationships are on strong footing.

Rose coloured glass was at The Honeymoon Suite, Melbourne, from 11 August to 3 September 2016. 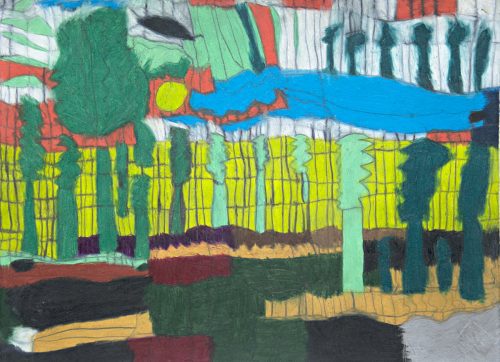 ART + CLIMATE = CHANGE 2019, an initiative of CLIMARTE, is a festival held across numerous museums, galleries and public spaces in Melbourne and regional Victoria. 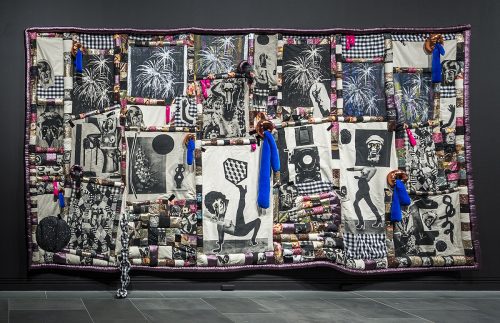 When encountering the work of multidisciplinary artist Sarah Contos one is often moved by surprise or curiosity, or caught off-guard by something dualistic, nostalgic or contradictory.