The IMA’s new bell-tower gallery has frontage on the busy Brunswick Street corner in Brisbane’s Fortitude Valley, and part of Robert Andrew’s solo exhibition Presence is a changing projection on the building’s façade, made in collaboration with Sai Karlen. At night ochres, sand and textures seem to float slowly up the building, evoking the stark organic origins of the artwork inside.

In contrast to the lightness of the images on the heritage building, within the gallery Presence is dominated by a solid half tonne block of soil, situated on a plinth in the centre of the room. A string is embedded in the ochres and oxides that are part of the soil, and it is connected to a spool on the wall. A low level machine noise accompanies the movement of the string as, taut with pressure, it winds out of the soil and onto the spool. Over eight weeks this string will gradually cut through the solidity of the block and erode its stability.

On the first day, the block was almost complete, but even a few hours later the first corner was starting to fall away. Andrew expects that by the end of the exhibition the core of soil will be left standing on the plinth with the dirt that has fallen away piled around it.

The different colours smear the original whiteness of the string with red, yellow and brown; these colours also reflected onto the broad spool of string.

It changes, darkening and lightening as I watch with other gallery visitors. It becomes hard to look away.

Andrew’s practice is unique. Machines and kinetic elements are integral to his artworks which narrate their own journey over the period of the exhibition. During the 10 years since he began practising, these intriguing works have been included in many institutional and private exhibitions; unforgettable in their inexorable progression.

Presence appears stark, with a marked contrast between the natural materials used and the application of contemporary technology. This work speaks quite directly to Indigenous representation of Country and Andrew’s heritage (which includes the Yawuru people from WA, along with European and Filipino). His use of soil explores the signature and the fingerprint of Country, while also acknowledging the cyclic nature of culture: a slow evolutionary ability to change. The soil will be transformed over the weeks, with a spreading pile of dirt and another of string that speak to each other across the room. Presence evokes a sense of necessary separation between elements, and writes the natural over the artificial, albeit using contemporary technologies.

It is tempting to see Andrew’s work as biographical, with insights drawn from his Aboriginal heritage and exploration of his identities. However what is also evident is immense respect for his materials, with the ingenuity he has vested in the technologies he builds central to this work.

At the heart of Presence is a sense of driving change. Andrew’s structures continue to create themselves and no element may exist in isolation. For the viewer, this work is progressively seductive, the machine sound and slow movement moderating the sense that change is accelerating beyond capture. 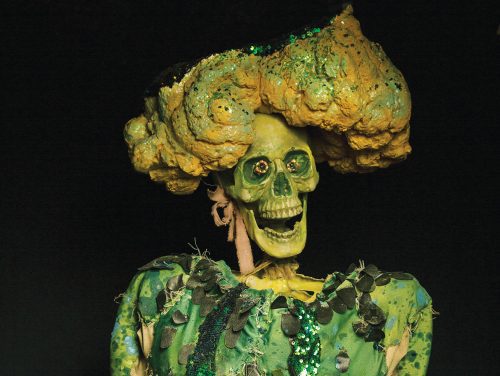