Richard Tipping approaches the inherent, almost physical, properties of language like a craftsman who is well aware of the limitations and possibilities of his medium. He describes working with words as “clambering up and over letters, exploring fissures and gaps in their shapes, playing with this inherited code we share as written sound.”

Born in Adelaide in 1949, Tipping credits the “sonorous depths” of actor Richard Burton’s voice with awakening his life-long passion for words. “I fell in love with poetic language in my first year at high school listening to the radio play Under Milk Wood by Dylan Thomas,” he explains. Through Burton’s voice he could hear “the spoken tongue rising from marks on a page like alchemical magic.”

Tipping was hooked. “I began writing poetry at 16 after reading many contemporary poets in the Penguin Books series, and by 17 discovered concrete poetry,” he recalls. In one of his early sculptures Tipping carved a line from Under Milk Wood, ‘starless and bible-black,’ into a block of granite, as he put it, “giving weight to words, referencing monumental epitaphs.”

The artist made poetry accurately concrete.

Concrete poetry is a practice that gives shape to words and it has a long history in both literature and visual art. “Concrete poetry works by reduction, finding essences,” Tipping says. He cites the Scottish artist Ian Hamilton Finlay (1925-2006), whom he describes as a “poet and polemicist,” as an early influence. In 2007, Tipping edited a special issue of Artlink magazine, The Word as Art, and he identified a long list of artists who have used text, ranging from modernist heavyweights Duchamp, Picasso, Braque and Schwitters to contemporary Australian artists Mikala Dwyer, Fiona Hall and Aleks Danko.

More than a decade on, text continues to make frequent appearances in visual art, but according to Tipping, some artists use words in their work with more finesse than others. “I don’t think that many artists who use text have any idea about the literary traditions of visual poetry,” he says. Most artists using text either shout a slogan or reproduce appropriated texts (often without acknowledging the source).

“Badly chosen words instantly wreck an artwork for me.”

In a work from 1980 Tipping engraved the phrase ‘STUMBLING BLOCK’ into a large chunk of granite making the words both physically manifest and jocular. And it is a highly developed sense of humour and playful use of puns that Tipping has become known for.

The artist’s cheeky humour and clever use of language is perhaps most evident in his ongoing Roadsigned series in which he either modifies existing signs or erects mildly subversive new ones. In 1979, for his first intervention, Tipping modified an Adelaide street sign, changing AIRPORT to AIRPOET. In another early work Tipping turned a START FREEWAY sign in Melbourne into ART FREEWAY by hiding the first two letters. “Fellow artist Alex Selenitsch rang to say he’d seen an Art Freeway sign on his way into the city, and it had completely changed his perspective for the rest of the drive,” Tipping recalls. For nearly 40 years Tipping has continued wittily adapting road signs, presenting us with REDUCE NEED and WRONG DAY, GO BACK, 2012, 2015; NO UNDERSTANDING, 2002; and ARTWORK AHEAD, 2012, 2014, to name but a few.

Several of Tipping’s signs, as well as photographs of them in situ, will be presented in a major survey show of the artist’s work, Richard Tipping: Art Word, at Latrobe Regional Gallery. The exhibition will also feature Stumbling Block and three other works from his Everlasting Stones series of sculptures; new large scale frottage drawings from Morwell, Victoria, where the gallery is located, as well as from San Francisco, New York, London and Berlin, which the artist describes as “composite portraits of place”; and a new very large sign installation titled In Advance of China which will stretch across 18 metres.

Some 50 years after crafting his first poem, it’s clear that Richard Tipping is still in love with the power of words.

“Words embody both things and thoughts,” he says, “We can’t think things we can’t say. We can recognise something as an object and depict it as a visual image, but only language gives it meaning. I am a poet, and words give wings to feelings.” 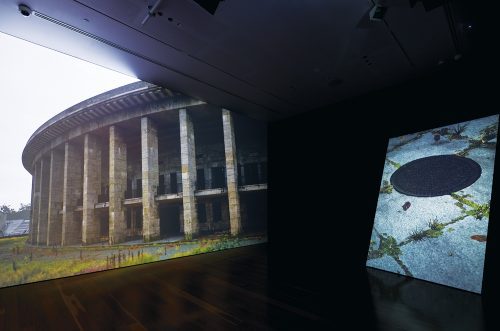