“There are no hard and fast rules,” says Richard Lewer about his studio practice. “I’ve been doing some very delicate drawings, next to some very heavy physical paintings.”

Richard Lewer’s home studio is new. “You are one of my first visitors to come to the studio,” he says of the long rectangular space in his courtyard. While the exterior is elegantly clad in steel, inside, skylights and glass doors let in an abundance of natural light. “My wife comes in here, and that’s it. I haven’t had any friends come over, or art friends.

It’s not a place that you go, ‘Hey, want to come over to the studio? Hang out?’”

That is due inasmuch to Lewer’s preference for an ascetic workspace, “I’m quite an isolated artist. I like my own space and quietness.” There’s an athletic discipline to the way he treats his day job, a steady routine of studio hours (8am-2pm) followed by the boxing gym (from 4pm) where he has volunteered his time as a trainer since 2001, and then he’s back home by 7pm. “I like being disciplined, and that goes back to the boxing training.”

Art and sport coalesce for the artist in life and in his practice. In 2016, after being a finalist four times out of five (one year he sat out) for the Basil Sellers prize, he was victorious in the final round with The Theatre of Sports. Ironically, his winning painting depicts 12 athletes in moments of defeat and despair. “If I had to make up an award, that would have been it,” he says of the sports-themed art prize.

The prize money went directly to the building of this purpose-built space.

At first, Lewer seems rather rueful when he mentions the fans, heater and “nice light” before remembering that for the last 25 years he’s had “studios, shed studios, studio spaces,” and, he continues, “you sort of move on every year or two, and they’re always very hot or cold and expensive.” With the prize money in his pocket, Lewer had to convince a builder to take on the small job –“builders don’t get out of bed for less than $150,000,” he says. It was time to dial in a favour from his boxing crew, made up of tradies, who got the job done in six weeks.

Despite being squarely in the artistic milieu of Melbourne’s inner north, with a dozen artists on his street alone, Northcote has little bearing on his work.

“I tend to go to [other] places to get materials, ideas. I collect stories from a national and international point of view. It’s not so parochial, I look outwards rather than inwards.”

Born and raised in New Zealand, Lewer decided, courageously, to engage with Australian history in his latest body of work.

“It’s probably the most exciting, complex and complicated part of Australia – its history and indigenous politics.”

Nine paintings that comprise one work line the sidewall of the studio, he’ll pack them up that after- noon for a show in Adelaide. The first painting on a large copper sheet depicts Australia before white settlement; the unpainted copper at the top gives the impression of a warm desert sky. Seated figures are found below trees. The rest of the paintings, in contrast, implode with action and with his trademark vernacular visual language that tends towards pessimism. Dense nimbus clouds threaten the arrival of the First Fleet, in another painting a wave caught mid- crest threatens to spill a boatload of refugees. These paintings are on black steel. “I liked the physicality of that material, and the idea that you can be quite brutal with it. You scrub things back, and can beat it up.”

On his decision to tackle Australian history Lewer says, “I’ve been here for a period of time. Some of these events have taken place in my life- time.” He remembers where he was in 2010 when the Siev 221 carrying a boatload of asylum seekers crashed into rocks o the coast of Christmas Island, killing 50 people.

“I need to tell those stories not to clarify but to make sense of where I live as well.”

This brings the conversation to the Australian flag, formerly flown at Parliament House in Canberra that is pinned in all of its Southern Cross immensity to a studio wall. Lewer found the flag at a warehouse in Sydney. When he asked if it was for sale, the saleswoman replied (perhaps with no intended declaratory undertone) that everything could be for sale. “Then she goes, ‘You’re not going to burn it, are you?’ I said, ‘Why would I burn it? It’s beautiful.’”

Lewer has painted ‘I must learn to like myself’ on the flag. It’s a phrase that simmers with tension for us all, for white nationalists and Teal Greens. “Defacing a flag, I looked that up too. There is no law. They tried to make a new law, but it didn’t get passed, twice. So you know, I kind of go, again, it’s the artist’s job to push the boundary.”

Next year he will leave his “beautiful place,” his studio, for a residency at Artspace in Sydney.

Some of the places, away from his studio, where Lewer collects stories, are the most remote. “Every second year, I tend to do a residency in an Indigenous community.” In a way, it is a respite from his routine. “In a community, it isn’t all about art. It is about the social engagement and your involvement in the bigger picture.” On top of that, it’s a reality check about his place here. “I haven’t a clue how to survive in the bush. You’ve got to keep it together – I think I can try to make great images but some- thing like that…I couldn’t survive out there at all without the knowledge of the communities.”

He has stayed at Anangu Pitjantjatjara Yankunytjatjara lands, known by the acronym APY, in northwest South Australia. This year Lewer hopes to collaborate with artists from APY on the theme of weapons.

Talking to Indigenous elders and spending time researching his latest body of work was integral to his process.

Lewer concedes, “Personally, I think that is why there’s so many problems [in Australia], there’s politeness but no real dialogue. We have to communicate and we have to be open.” Lewer’s initial hope was that The History of Australia would be an educational resource for schools.

He was working towards a collaborative work with Steaphan Paton, an Indigenous artist but they were unable to secure funding and it never eventuated. “I had to look at myself and ask, ‘Am I ok to do [The History of Australia]? Maybe not in Australia, I am a Kiwi. How can I do that?’ However, I feel as though it is my job as an artist to put the work out there and to communicate. I’m trying not to make a judgment even though I realise all the works are very negative. But you could say that of any of my works. They’re about extremes. That’s the way this country was shaped and given its identity.”

Surrounded by a verdant garden, a simple garage conversion clad in plywood makes a small but sufficient space for Yvette Coppersmith’s painting practice. 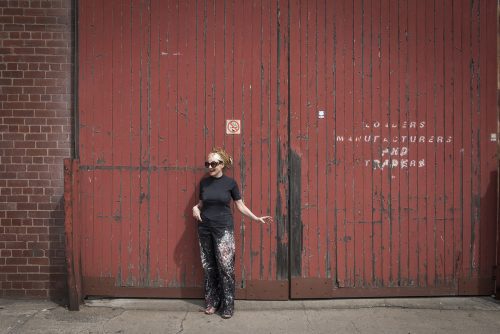 A timely opportunity finds Rose Nolan steadfastly working on a large-scale installation in a studio sublet in Melbourne’s gritty west.