Part of the enduring strength of art is its ability to encapsulate and communicate memories and stories, however emancipatory or painful these might be, and share these experiences with others. This power sits at the core of the exhibition Back to Burra Bee Dee by Richard Griffiths. Showing at Devonport Regional Gallery, the Burnie-based artist’s work explores his ancestors’ past, alongside the emotion and memory of living on an Aboriginal mission.

Griffiths grew upon on a mission called Burra Bee Dee in Coonabarabran, NSW. There he became separated from his culture, being told it was the Devil’s work. During the 1980s he moved to Tasmania with his family, and around three years ago embarked on a project to reconnect with his culture through visual art.

Denise Robinson, a program officer for Aboriginal Arts at Arts Tasmania, assisted Griffiths in extending his art practice and undertaking research. “He was very interested in returning back to his homeland to speak to the old fellas before they started passing away, because he wanted to add flesh to his memories of growing up on a mission,” she says.

With the support of Aboriginal Arts at Arts Tasmania, Griffiths travelled to King Island to research his family and Burra Bee Dee.

“When he was there he interviewed his older extended family members and also visited Aboriginal centres and libraries, as well as travelling to the Sydney library to look at all of the archived material around the mission,” explained Robinson. “He also tried to access photographs, many of which had been lost, and what came out of it was these extraordinary linocuts.”

While Griffiths’s striking black and white images are beautiful objects in themselves, Robinson notes that they also have a hugely personal resonance, not  only for Richard, but also for viewers. “What I’m finding is that other Aboriginal people who are seeing Richard’s work have this sense of recognition, and they identify how these stories echo their own stories,” she says.

With the images partly evoking Griffiths’s ancestral past, the linocuts also have a physical resonance.

As Robinson explains, “Richard told me how being on that land again, he could smell, feel and taste his life again. There was this sense of being back in that place. These images just came to him through that.”

In this way the artist’s works are about healing and storytelling. As Robinson says, “My feeling for Richard is that by him telling his story, it actually provides Aboriginal people with the encouragement and impetus to tell their stories, because they matter.”

The Revealing Image displays a collection of Magritte’s personal, and largely unseen, photographs and films. 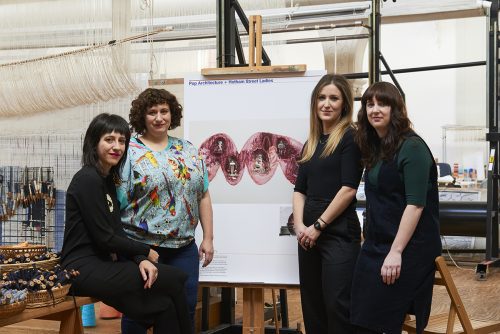 Mona founder David Walsh AO has announced a collaboration between the Melbourne-based Hotham Street Ladies and Pop Architecture as the winner of the 2018 Tapestry Design Prize for Architects.