He looks like an Indigenous Mad Max; with a beard made from steel wool, he rides his tough red allterrain vehicle across the Great Victoria Desert plains. Milpa Project, 2018, is a mixed media work by the Spinifex Arts Project, established in 1997 when the Spinifex people at Tjuntjuntjara in Western Australia turned to painting to map law and connection to the land, as part of their native title documentation process. This new, humorous animated artwork’s makers, Sophia Brown, Timo Hogan and Kumanara Stevens, will travel some 1100 kilometres southwest to Fremantle, and are among many new and emerging Aboriginal artists making a now annual pilgrimage from arts centres as far north as the Kimberley, or way out east just across the Northern Territory border, to the Revealed exhibition, symposium and market.

“The Spinifex artists have been producing these animations with a bit of a serious message behind them,” says Fremantle Arts Centre’s exhibitions and special projects curator, Erin Coates.

“They’ve made another one about the importance of wearing seat belts, and it’s produced in language for the community.” In all, about 60 to 70 artists will be coming to Fremantle. “We’re honoured to have them here, where they’re part of professional development discussions around running art centres, training and creative workshops, and they’re here to speak to the public at the symposium and appear at the market day on the frontline selling their work.”

Originally conceived as a biannual event, Revealed began in 2008. It moved to Fremantle four years ago from Gallery Central and the Perth Cultural Centre. In 2018, art turnover at the market and exhibition combined was a record $481,674, up from $432,768 in 2017 and $371,357 in 2016. Everything is for sale as the work of more than 120 artists goes on show this year, with Revealed filling Fremantle Arts Centre’s larger south wing galleries.

The symposium, meanwhile, is “now really artist led, with Aboriginal artists sharing their successes, their projects, their struggles,” says Coates, “and it’s a really beautiful and intimate look at what artists are doing and what matters to them.”

Some centres are taking part at Revealed for the first time.

The event has a mentorship program and, in the lead-up to the event, invested in sending out expert help or funds for projects to three arts centres. In addition, 12 independent Western Australian Indigenous artists have been selected this year, including several artists from metropolitan Perth and coastal Bunbury. “For a lot of these artists, art is a connection back to Aboriginality; they’re exploring issues around being from the stolen generations or they’re reconnecting to culture,” says Coates. “For others, it’s a continuation of culture. It’s very important to provide support for these artists because they don’t have an art centre.”

Revealed is steered by an Aboriginal advisory group of three Indigenous sector leaders: Bardi and Nyul Nyul man Chad Creighton, who is chief executive of the Aboriginal Art Centre Hub of Western Australia; Glenn Iseger-Pilkington, an independent curator and a member of the Wadjarri, Nhanda and Noongar peoples; and Sharyn Egan, a Noongar artist and arts facilitator. Revealed also has a two-week professional development internship for four Indigenous arts workers, and these workers help with the exhibition layout and deciding where works should go.

Initially, arts centres put forward lists of artists and images of work, and Revealed’s selection committee discuss the proposals. Whittled-down lists are returned to the arts centres, which then have four or five months to produce and submit the work.

Coates says Revealed has proven a launch pad for artists, such as Noongar artist Bradley Kickett, who has gone on to a solo exhibition and international work.

This year, new media, sculpture, graphic design, prints, textiles, painting, weaving and carving will all be on show. Key works include an installation by the Tjanpi Desert Weavers, whose work tells the story of a white fella named Larry, who while staying at a weather station in 1962 and 1963 wanted to find a kungkawarra (young woman) to marry. The women were frightened of Larry, so they hid high in a tree, in a nest of their making. They could see him, passing by in his Land Rover, but he could never see them; eventually, he went wild and gave up. The woven work shows the women in a tree with this lonely white figure, hands on hips in frustration, beneath them. A Ngaanyatjarra language sound element, in which the artists recount the story, accompanies the work.

There is also an installation of carved wooden objects by Maruku artists Danny Fox, Maxwell Cooke and Brett Jennings, young male leaders from different communities of the Ngaanyatjarra and Pitjantjatjara lands. Specific wood is collected from particular places for punu making – punu meaning living wood – as an expression of Country and embedded tjukurrpa (traditional law), which is still alive in the Western Desert today. Their project, specifically for Revealed, was facilitated across a 1500-kilometre expanse of land over four months, and was about the young men learning and engaging important traditional skills, making shields, spears and boomerangs. “They’re going to be in a dynamic installation,” says Coates, “suspended and in action.” 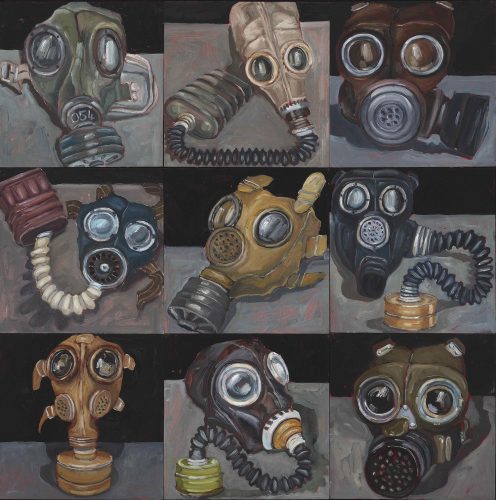