Radiant Pavilion is a festival dedicated to showcasing contemporary jewellery and object making. This year it includes 80 exhibitions and events across 62 locations featuring 200 artists who use a glorious explosion of diverse materials, techniques and ideas. There is also a conference called Making OUT and it all comes together during nine jam-packed days in August. Anna Dunnill sat down with the co-directors Claire McArdle and Chloë Powell to talk about the festival.

Anna Dunnill: How did you come to be curating Radiant Pavilion?

Claire McArdle: Well, we had both been to this big event that happens in Munich every year. It doesn’t really have a name, because it grew organically, it’s just called ‘Munich.’ We wanted to make something which was sort of like that but more curated. Something that had a real focus on contemporary jewellery and objects, and a high standard of work, because Australians make such great work!

Chloë Powell: ‘Munich’ has been going for, I think, 50 years, but there was nothing like it over here, on this side of the planet. We thought the time was right. We had really great work here and great artists and we had to provide a platform to get it out there.

CM: And Radiant Pavilion is not just for showing Australian work either. Obviously that’s a really strong part of it, but anyone can apply. The first time, in 2015, we really had no idea how it was going to go. We did the callout and were like, “If we get 10 events we’ll be really happy!” And we had such an amazing response from the community.

Contemporary jewellery doesn’t really have a definition. I think that’s what makes it so exciting.

CM: Well, I think Radiant Pavilion leaves it open for interpretation. Contemporary jewellery doesn’t really have a definition. I think that’s what makes it so exciting. Maybe it should have something to do with the body: it doesn’t have to be worn but it can be worn, maybe it’s just the idea of being worn. And it’s not just jewellery, it’s also objects.

AD: How do you see some of these events sitting within broader trends in object or jewellery practice?

CM: I think it covers a lot of it!

CP: When we curate the program, we try to get the range of what’s happening. There are some really current issues. There’s a show called Island Welcome, which is about how we welcome refugees to Australia, and our government policy at the moment, and how people respond to that. It’s by eight women who are all making a garland to welcome refugees. That’s one that I really love. And it’s so of its time. It’s such a big issue for a lot of people, and has been for a while, but it’s not going away.

And then there are quite a few things that talk about that connection with objects, the emotional side of things, how people communicate with jewellery and objects, whether it’s making a promise, as in the group show Voveo, or the physicality of drinking out of certain types of objects, as in Different Tastes by Sam Mertens. That sort of thing.

AD: There has been a huge resurgence in ceramics, textiles, jewellery: things that are hand-made.

CM: Yes, and I think people have more appreciation of it when they have an idea how things are made. It’s so vitalising, making something yourself, with your own hands.

CP: It’s that kind of slowing down and reconnecting to things again.

AD: Are there any program highlights?

CM: Bielander/Britton/Minegishi is a big show of international artists. Helen Britton is from Perth originally, but they’re all in Munich now. And Boring, very boring is by Susan Cohn who is very established in contemporary jewellery.

CP: Dear Maker is interesting as well: it’s an online project about, essentially, what you would say to someone who made something really precious to you. You write a letter to the maker of something: you may have known the person or you may not. It’s already online.

CM: I think that’s the longest running event in the program. It started in May and runs until December. And then of course you go right down to events that only happen for three hours on one day.

AD: Geographically, how’s it spread out?

CM: Inner metro. A lot of CBD, a bit of North Melbourne, a bit of Fitzroy, North Fitzroy. Some are at various locations; they’re either moving around or on the web. There’s one in Footscray at Trocadero; and Bundoora Homestead as well.

AD: Aside from exhibitions, are there other events or public programs?

CP: We’ve got two master classes. Yutaka Minegishi is a wood-carver, so that’s a pretty specific skill-set that you don’t always get to learn. And then David Huycke’s Beyond Skill is a more a conceptual approach to making. David is Belgian. He’s amazing technically, I’m really excited that he is coming. His thing is about controlled chaos basically; understanding how material works to the level that you can manipulate and play with it, break its rules and do something different with it.

CM: There’s a talk by Robert Baines at RMIT, about their collection from the 1980s. And then there’s a workshop called Intercept in which they will be looking at clothing and jewellery, working with fabrics.

CP: There’s Without a Jewel at City Library. That’s curated by two young women from Sydney, Victoria Cleland and Judith Torzillo, who are awesome, very active. They’ve got their fingers on the pulse and have a really interesting approach to things. They’ve installed some photography there, and they’ll also have discussion sessions.

I want to put in a little plug for the conference that’s running alongside this, our allied event which I’m also running, called Making OUT. It’s a conference about making, basically. We’re bringing together artists from all different fields and talking about what making is, what it means to us, how it informs what we do, how our brains develop.

Our focus has always been on the work. We always want to get people to see as much work as possible, and make work. But we do always have an element of critical discourse as well.

CM: This year we’re also commissioning some writers to write about what comes from the Radiant Pavilion festival.

CP: It’s a new project for us, and something we’re trying to do, ongoing, is build other projects that support artists in different ways. We’re doing a public program series with Craft Victoria as well. We’re partnering with them on professional practice programs. So it’s just about trying to share our skills.

AD: If you could condense the aims of Radiant Pavilion?

CM: To bring contemporary jewellery and objects to Melbourne, but also to bring our work to the world.

CP: It’s a pinpoint of energy. 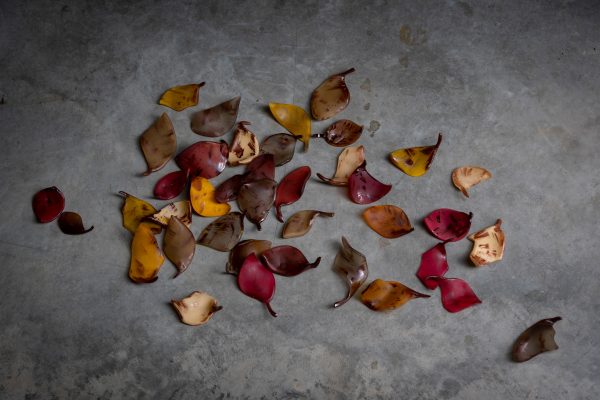 Annette Blair shows us the past lives of objects through glass

Annette Blair has been blowing, sculpting, carving, and painting glass for over 20 years—and now she’s exquisitely demonstrating this experience in her first solo at Canberra Glassworks, Quietly Spoken.