The artist explained that his work was a response to canoeing on Lake Pedder in 2017.

“A feeling of being absent from human clutter and noise settled on me, but the sudden recollection that this lake is a dam, tipped everything on its side.” Greville said. “Pedder’s distinctive white quartz beaches and deep submerged hues are made up of red, green and blue reflecting screen RGB colours of the digital world. A slightly downward view and use of digital mapping view are important markers, offering a slight cool remove from the landscape, while enticing the viewer into the landscape unfolding into a broadening distance. The voids reveal a constructed concrete infinity, the diagonal checkerboard slices follow a top-down grid, prime cuts of a country cut up and sliced for consumption.”

This year the Glover Prize was judged by artist Joan Ross, director of the Tasmanian Museum and Art Gallery (TMAG) Janet Carding, and Barry Keldoulis who is CEO of Art Fairs Australia.

In discussing Greville’s winning work, Keldoulis said, “His work comes from a very distinct moment on Lake Pedder of his experience of the landscape, and a subsequent realisation of the constructed nature of the nature around him… the work has a very dramatic sense of almost looking at the landscape from space, which captures the silliness of the notion that we can escape this planet to somewhere else. So for me there’s an element of the love of the landscape, but a desperation and a fear that we are not treating it in the manner we should – with respect.”

Works by all 42 finalists are on show until 17 March in Evandale, Tasmania. Admission costs $10 and includes a copy of the catalogue. 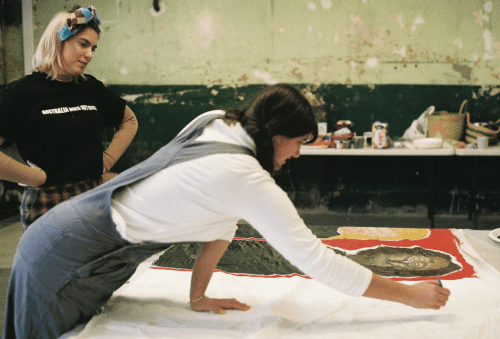