Curated by Dr Pat Hoffie and Rosemary Miller, The Partnershipping Project brings together 20 installations, a database of interviews with artists, commissioned essays, and community workshops. Currently touring to four regional locations via shipping container, the exhibition examines our connection to place and how location shapes our identity. Briony Downes spoke to curator Pat Hoffie about floods, fires and why regional artists deserve to be heard.

Briony Downes: The Partnershipping Project embraces multiple elements across many platforms. How did the project gestate?

Pat Hoffie: I wanted to create a show that grows as it goes. The Partnershipping Project uses an alternative touring mode. Each location brings new artists on board, so the exhibition always remains connected to a specific region and its communities. People living in the regions often have a really interesting point of view, so I began to construct a show that not only looked at the significance of location but also posed the question, ‘Does place matter?’ To me, this is a very important question for the 21st century.

Globalisation and the movement of people began to emerge as key themes for the project. We don’t often think about the role of shipping containers in globalisation, but we cannot move goods globally unless they are in shipping containers. For The Partnershipping Project we are creating an accessible resource of information online and by using the shipping container as transportation, reflecting a sense of movement and change.

BD: While the artists in the exhibition change in each touring location, the works are always displayed within eight small boats set up inside the gallery. Can you elaborate on the significance of the boats and how they tie into the importance of place?

PH: Each location we are traveling to has some connection to water, whether it be the industrial wharves of Burnie (Tas), Lismore and Wilsons River (NSW), or Mt Gambier (SA) with its blue lakes and Limestone Coast. To echo this connection and symbolise the voyage, we repurposed eight boats we found in Tasmania and reconfigured them into small editions of exhibition furniture. Each boat is a bit different, some are wooden, some are fiberglass. The only proviso for the boats was that they had to fit into shipping containers, which are also connected to water via trade routes.

Currently the show has moved on from Burnie and is on its way to Townsville.

BD: How do you choose the two artists who will continue?

PH: The selection process came down to questioning what it was about the works that reflected back on the place from which they came. From Tasmania, we chose Selena de Carvalho and David Mangenner Gough. Selena made 100 Year Flood, a poetically moving piece about the Tasmanian environment and David used hand-stitched kangaroo skins to create the sail for his boat, a material that recalls his Indigenous ancestry and doubles as a projection screen for a short film. When you think of Tasmania, one of the things that immediately comes to mind is the profound Indigenous presence and the impact this has on the landscape. Having said that, I could have sent any of the works and been happy.

BD: Umbrella Studio Contemporary Arts in Townsville is the next stop for The Partnershipping Project, yet they have had to relocate following recent floods. How has this affected the Queensland leg of the exhibition and workshops?

PH: The show at Umbrella was postponed but is going ahead in May. Everything about The Partnershipping Project is a story of people who pull together to make things happen and the Queensland artists have fully embraced this unexpected challenge. Local artist Rob Douma was telling me about the irony of making art to go in a boat while cleaning up his flooded studio.

Lismore Gallery has also been flooded twice in the past. Water is a theme in The Partnershipping Project, we just didn’t want it to be this much!

BD: I keep thinking about how we are talking about an exhibition populated by boats and this last summer Townsville flooded while southern Tasmania had weeks of bushfires. Such extremes of weather.

PH: Yes, and that is what Selena de Carvalho’s work is actually about. The devastating effect of floods and fire on the landscape. For 100 Year Flood, Selena loaded her boat with coal scraped from the rainforest in Tasmania’s Weld Valley and used carbon monoxide particles collected from car exhaust pipes to write across the boat’s surface. Selena has been an activist since she was a little girl, working away at the cause since childhood: skipping school and going to protests.

Viewing these works and being able to listen to the artists speak in the online interviews, you really get a sense of who the artists are.

Their stories are really moving, and they remain available online whether the artwork moves on or not.

BD: The exhibition represents only one portion of the project with the online archive is continuously expanding to include documentation of making processes and personal stories from artists and writers. What makes The Partnershipping Project a valuable resource?

PH: This show is unusual in terms of how many boundaries it challenges: regional, Indigenous, curatorial practice, touring practice. It has really taken them all on and given them a good shake. There’s a lot of risk involved because you’re not just selecting and then bottling it up.

I think in Australia, we’re not really supporting the regions like we could. It’s not just visual arts, it’s across all areas. The politicians complain that the regions are dying but we need to allow the regions to be who they are – by listening to their artists and their writers and backing them more. 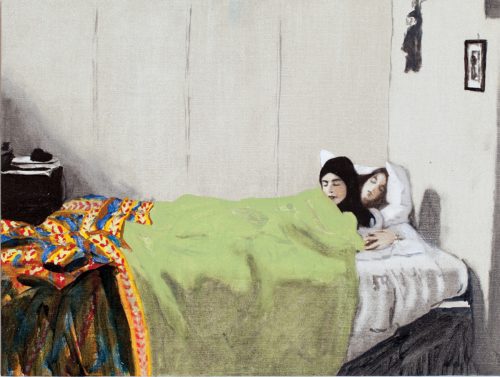 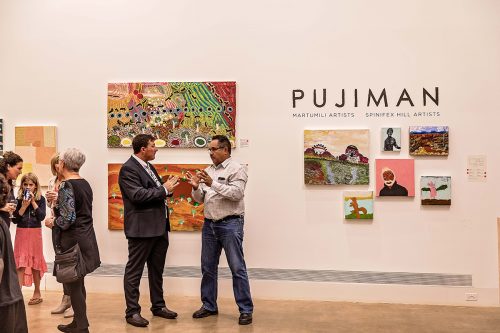 The pujiman, meaning bush or desert born, were the last Indigenous Australians to live entirely nomadically.