The Lyon family’s new museum has been a labour of love: during construction, Yueji Lyon would often climb up three levels of scaffolding used to install some 10,000 bluestone cylinders on the exterior. Her architect husband Corbett designed not only the building itself, but an array of distinct, commanding spaces. Soon it will be filled with art – but for the moment, there has been some breathing space to enjoy the purity and potential of those stark white rooms.

The Lyons live in a separate building next door to the new museum. From this house, they have been sharing their impressive 350-item art collection with the public since 2009, opening it up several times a year to conduct tours. Corbett Lyon says the house is the only one in the world to have been designed from scratch to be both a home and museum.

Based on its success, they bought the enormous block adjacent, set up a charitable foundation and independent board of directors, and invested $14.5 million in building a dedicated public museum. In lieu of a foundation stone, the project began with the pouring of an extraordinarily large concrete slab, with Reko Rennie commissioned to paint a mural on it.

This work, called Visible Invisible (2017), was duly covered over, except for one long strip, as the new museum was built on top.

“People will feel it underneath their feet but not see it,” Corbett Lyon says – unless they discover that long strip, or photographs by John Gollings displayed in the rear café.

The family will be keeping their domestic Lyon Housemuseum separate from the new site, called the Housemuseum Galleries. The Galleries will be open six days a week and will gradually accumulate a public collection distinct from the Lyons’ private works. The inaugural exhibition, Enter, begins this endeavour with works commissioned from 16 artists, including some already in the Lyons’ home vaults, such as Callum Morton, Patricia Piccinini and Brook Andrew.

“I have had a very long-standing interest in the relationship between art, the viewer and the architecture of the space in which it is presented,” Corbett Lyon says. “This first show is developing work within those thematics and we asked each of the 16 artists to respond to that idea.” He says that rather than a group show it is “a series of encounters for the visitor,” with each work engaging a particular zone within the galleries.

The spaces include a large central gallery and four peripheral cloisters. “Enter is a journey for the visitor  in encountering these works, hence the title, which is about inviting people to cross that threshold – and many people still find it difficult to cross the threshold of an art museum. We are making that as inviting as possible.”

The new commissions include work from Esther Stewart, whose continuing interest in domestic architecture manifests in scale models of suburban house interiors, and from Brook Andrew, who has devised a work incorporating an inflatable mirrored sphere, 3.5 meters in diameter. Nova Milne has created a site-specific video work, as has video artist Baden Pailthorpe: both have used the new space as a basis for their work.

While Dan Moynihan has installed a mirrored brick sculptural wall in the rear courtyard, Constanze Zikos was given the dramatic front window of the Galleries: a tight and challenging space in which he is installing a flag-like work that visitors will be able to walk around.

Lyon says the intention is for the Galleries to be a cross-disciplinary experimental space, extending on the work that has been done at the private Housemuseum. Annually, the program will be a combination of specially curated exhibitions, a monographic exhibition for an artist whose works are represented in both the private and public collection, and then an architecture/design show.

Lyon recalls, as a young graduate student, visiting the Peggy Guggenheim Collection in Venice and being deeply impressed by the way she had bought an existing building as a home but opened it to public visits. Going a step further with the purpose-built Lyon Housemuseum, and now with the Housemuseum Galleries, Lyon says he feels much has been achieved with sharing the collection he’s been fortunate enough to accumulate thanks to the family’s great love of art. “I’ve had the privilege of designing both buildings but it’s very much been a family project,” he says. “We do everything within the family, so it’s an enormous commitment.” 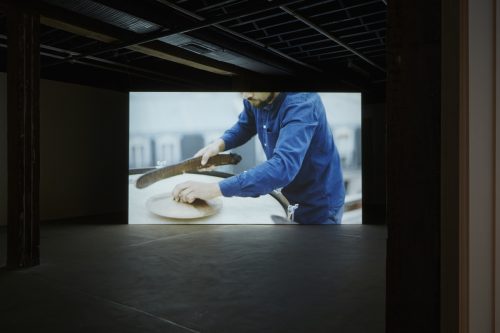 For Mesiti, blending performance, dance and music is a way of exploring non-verbal communication, which can reinforce community and cultural traditions. 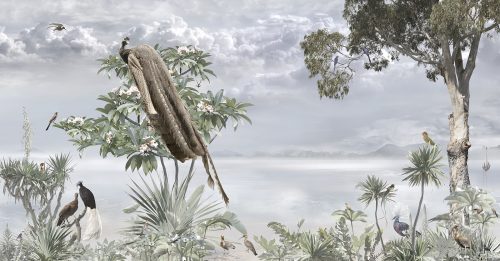 The expanse of the sublime and the particular exactitude of botanical studies are present in Valerie Sparks’s immersive wallpaper installations of a hybrid Australian landscape.