Hayden Fowler uses his body as a canvas for extinct native New Zealand species. Recently, a crowd gathered as a tattooist inked on Fowler’s torso a kokako, a bird whose last confirmed sighting was 50 years ago. Before the audience could even comprehend what they were witnessing, some grabbed for their phone cameras; others stood engaged for an hour and came back the next day to watch the tattooing again.

Fowler knows that, as an artist, he must create a spatial experience, with texture and smell and a three-dimensional connection, as evocative as his childhood memories, to compete with people reflex- ively retreating behind phone screens. Born on New Zealand’s north island, in Te Awamutu, in 1973, he would ponder the European impact on the landscape: the clearing of forests, the pollution of rivers.

Some trees up to 4000 years old are still standing, but animal species that germinated those trees and birds that once fed upon their shoots are gone. Eels used to be numerous, up to six metres long, like giant fish. “I remember going down to a stream near a factory that overnight had poured something [poisonous] into the stream,” says Fowler, who now lives and makes his art in Sydney. “All the eels had crawled out, thousands of eels, and died on the grass.”

In the group show New Romance: Art and the Posthuman, which features both local and Korean artists, Fowler’s work will be seen first: he is building a large, plastic-covered biodome, 10 metres in diameter, for the forecourt entrance of the Museum of Contemporary Art Australia at Circular Quay. It’s basically a kit set of about 120 pieces, which an MCA team is helping him install. Inside the biodome he will place artificial trees and logs, constructed in his own studio from timber and plaster, and a pool of water, like a brackish, swampy, post-apocalyptic lake.

Up to 20 visitors at a time will enter the biodome via a tunnel onto a slightly raised viewing platform. They will see other humans, including Fowler, occupying the dead-looking habitat at regular intervals; CCTVs will broadcast the movements of Fowler et al. onto screens in the museum.

MCA curator Anna Davis says New Romance developed through conversations with co-curator Huongcheol Choi about how both Australian and Korean artists were fascinated by and fearful of new technologies, and concerned with hyper-consumerism and environmental threats.

‘Posthuman’ signals a redefinition of humanity’s place and a breakdown between what we think of as natural and artificial.

Works include Wonbin Yang’s Species, 2012, a series of insect-like robots made from urban waste and small mechanical parts; Patricia Piccinini’s silicone sculpture Bottom Feeder, 2012, which feeds on human refuse; and Piccinini’s collaboration with Peter Hennessey, Alone with the gods, 2016, which invites people to enter the bunker headquarters of a fictional isolationist cult.

Fowler’s likewise immersive biodome, Dark Ecology, 2015–2016, is inspired by the look of death Fowler would see in European winter forests – he spent a year in Berlin on a scholarship at the Universität der Künste – but is also a nod to sites of environmental catastrophe, such as Fukushima and Chernobyl. Fowler’s aim is not to be an ephiphany for climate change deniers or to motivate the environmentally indifferent. The work is intended as an emotional space for those of us all too conscious of the wreckage wrought by rapacious industrial growth.

“There’s very little space for grief and mourning around these losses, so I’m quite interested in creatingthese spaces that are a space for reflection, and mourning,” says Fowler. “It’s a more commonly recognised response in indigenous communities around the world. Also in Australia, too, we’re noticing, where coal seam gas plants are happening, there have been a lot of farmers’ suicides, a huge amount of depression reported about degradation and loss of landscapes.

“In mainstream Western culture, probably because we’re detached from landscape, we have very little ownership over landscape as individual people, or place, so those kinds of feelings don’t have a home, or aren’t really acknowledged, or aren’t considered important in an economic framework.”

Inside MCA, Moon Kyungwon and Jeon Joonho’s EL FIN DEL MUNDO, 2012, which translates as ‘The end of the world’, is a two-channel video installation. A man sits in a dimly lit studio with his dead dog in a shopping trolley. A woman dressed in futuristic clothes senses the man’s presence. Both are survivors of a major catastrophe. The artists contend climate change will endanger human survival, and through a poetic narrative ask what will we eat and wear, will art still be around, and whether sunsets will still be beautiful.

Moon and Jeon say their work is neither envisioning utopia nor dystopia but asking questions about the future, to create “new discourse or thought about our lives” now.

Fowler, on the other hand, is “kind of pessimistic” about the future of humanity.

“I’m not sure whether anything can stop the train [of destruction] at this point,” he says. “At the same time, we’re human creatures, we’re emotional, we have rich psychologies, and a good place to start is how this affects us and how we feel about it.” 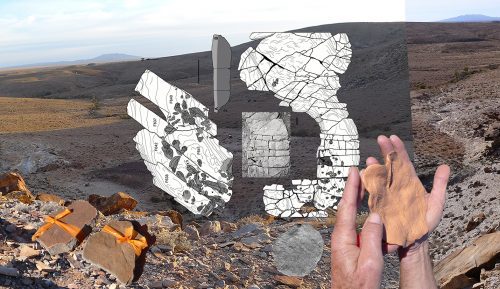 Unidentified fossils discovered in the Flinders Ranges form the basis of an exhibition by Berlin-based artist, Mariana Castillo Deball. 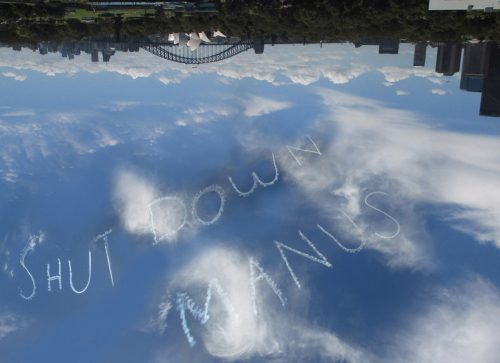 Next week a group of artists will present a petition to the National Gallery of Victoria demanding that the gallery sever its ties with Wilson Security, a firm it accuses of “violently enforcing” the incarceration of refugees and asylum seekers on Manus Island and Nauru.