Many, if not most, major art collections are a bit like icebergs: only a fraction of the whole is visible while the bulk remains unseen. Mornington Peninsula Regional Gallery (MPRG) in Victoria is no exception. As artistic director and senior curator Danny Lacy points out, “the collection has been hidden away for far too long.”

In fact, until this year, MPRG didn’t have any spaces dedicated to showcasing its extensive permanent collection, but as part of celebrating its 50th anniversary the gallery has created a series of rooms in which the collection can really shine.

Despite having been shaped during its first two decades by founding director Alan McCulloch (1907–1992) — the man behind the Encyclopedia of Australian Art— Lacy says that the MPRG collection isn’t so much encyclopedic as incredibly consistent. This, he explains, is thanks to several long running acquisitive prizes which focussed first on drawing, then printmaking, and currently on works on paper. The result, Lacy says, “is a pretty good snapshot of the last 50 years in terms of current contemporary practice.”

For MPRG: FIFTY, Lacy has channelled the energy and strengths of the collection into concentrated zones. These include one that highlights works by winners of the National Works on Paper prize; another that features prints by women made during the 1970s and 1980s; and a third that turns the spotlight on the weird and wonderful practice of stream-of-consciousness and automatic drawing. Several other areas are dedicated to depictions of the Mornington peninsula, from the 19th century to the present day.

MPRG: FIFTY takes place across multiple platforms. There is an extensive hardcopy publication as well as MPRG TV, an online portal which includes a video tour of the physical exhibition with Lacy, conversations with artists, and other activities. In this way, MPRG invites everyone to join in celebrating their milestone anniversary, wherever you are. 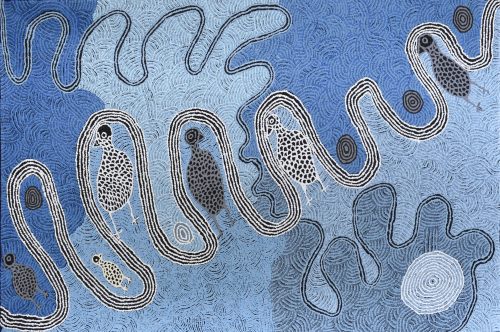