For her exhibition, The Thinking Image, she takes her subject matter from the 16th-century Dutch still-life tradition: one body of work references vases of flowers; another, piles of hunted animals. But their vibrant hues and bursts of movement place them firmly in the 21st century, and their exaggerated motifs speak about composition as much as symbol.

“I spent a lot of time in the Netherlands standing in front of paintings,” Behrens says, “letting all the symbols and metaphors fade away – just looking at what’s happening within the actual works. Finding directional lines, repeated objects, things that reveal themselves once all the shine goes away.”

The hunting trophy works, which Behrens describes as “monster-scapes,” feature the twisted forms of dead animals in a near-indistinguishable pile. Glowing neon, they evoke the wealth of Sunset Boulevard, at once hideous and compelling.

Traditionally, the flower motif references mortality and the fragility of life.

Behrens, however, considers these works as “time structures in a different way.” She points out that in traditional paintings, the same flower is often painted multiple times in different stages of life: a bud, a full bloom, a withering cluster of petals. Compositions are subtly symmetrical. Exaggerating and expanding these elements, Behrens’ works require a “to and fro” between the viewer and the painting.

Perhaps the final time structure inherent in the work, this is the key to the “thinking image”: the slow reveal of layers and meanings that keep the viewer coming back for more. 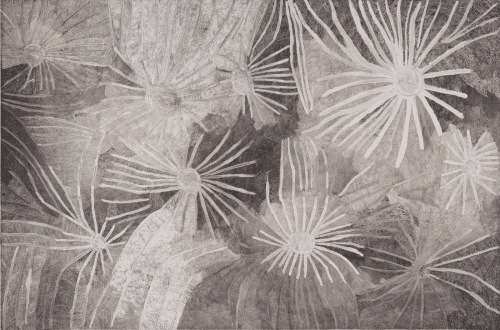