Instead, explains curator Scott Elliot, collage is referred to more broadly as a way of thinking, not just a way of making. The exhibition, which is part of the Queer Contemporary program running at the National Art School (NAS) in conduction with Sydney’s annual mardi gras, was born out of Elliot’s search for commonalities in queer art practice beyond what we’ve come to associate with queer culture. Misfit features the work of 11 contemporary queer artists from Australia and abroad who use some form of “expanded collage” in their practice. Expect sound-based work, photography, performance, and site-specific installations instead of traditional paper collages.

Collage has long been used as a tool to subvert. Examples of this can be seen in its boom during the Dada years. For its practitioners, the appeal lies in liberating content from context. It can be political, playful, or somewhere (at times even everywhere) in between. It is also a decisive and deliberate tool.

“At its essence, collage is about misalignment. It’s about the fragment, and about the collision of competing worlds,” Elliot says. Because of the ease with which its practitioners can “radically reorder things,” Elliot thinks it is a particularly useful tool for queer people and other marginalised communities. It’s a powerful way of expressing their perspectives and experiences of being in a world where they don’t quite fit.

A prime example is Beijing-born Chicago-based photographic artist Guanyu Xu who hovers between two countries and cultures. In Beijing he lives a double life, concealing his sexuality from his parents and family. In the United States he grapples with life as an artist, a gay man, an Asian, and an Asian gay man. Temporarily Censored Home, his photographic series from 2018-2019, is a physical manifestation of his situation. Xu plastered his parents’ home with imagery from life in America – portraits of lovers, travel photographs, magazine clippings and more – at once ‘decorating’ and obstructing windows and doorways. Once these installations were photographed, Xu dismantled the scenes before the return of his parents, literally concealing himself once again.

Outside, 2020, is a collaboration between artist and academic Gary Carsley and four queer-identifying students from NAS: Fergus Berney-Gibson, Bea Buckland-Willis, Eliza Gwynne and Isaac Spigelman. Elliot describes the three-by-seven metre installation as “an intergenerational portrait of queer identity.” This time, Carsley’s long-running investigation into landscapes and their place in society includes an amalgamation of “notorious” gay cruising grounds from parks around the world, such as the ramble in New York’s Central Park, Katong Park in Singapore, the Tiergarten in Berlin, and Sydney’s Green Park (which incidentally is just across the road from NAS). The four students’ collage contributions have been printed directly onto the negative of the image, and then cut out and pasted onto Carlsey’s photographs, disguising and revealing themselves all at once.

One of the aims in curating Misfit is for people to realise that living a queer life does affect how you make art, how you see the world, and how you live your life. According to Scott, there is a collective queer way of working and thinking.

“Being queer shapes how you think and how you live in the world from an early age. Although it’s not often that you have an all queer exhibition, it’s important that they happen; to have these affirmations of queer culture.” 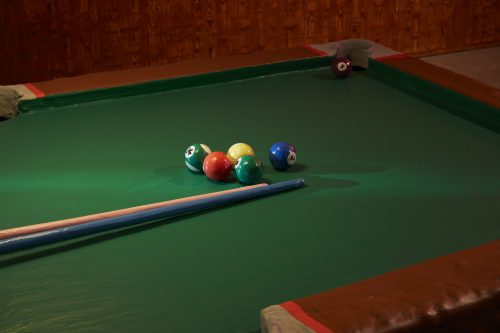