Tania Candiani is assembling an array of trunks and branches, from different trees, to create a large network of organic traces. These traces are made of conjoined branches that resemble floating veins, expanding and hovering over the aerial territory of the exhibition space, creating a sprawling structure for the Mexican artist’s installation Waterbirds. Migratory Sound Flow. Showing for the 23rd Biennale of Sydney, this poetic work combines nature and technology to reflect on migration, language and living ecosystems through the sound of birds.

In response to the Biennale’s theme of ecologies as sovereign entities, Candiani’s installation also deploys air as material, by guiding the air to activate wind instruments—inspired by Mesoamerican designs of aerophones, such as the ocarina—which are positioned near the edges of her branch-like structures. These natural wind sounds flow alongside speakers, which in turn play the singing of aquatic birds, endemic to Australia. In the words of the artist, the project explores “the idea of transiting territories through sound, and traversing living bodies of water linked by the movement of birds, waterways that resemble a blood system or neurons.” In essence, it is a tree-like sculpture, with branches resembling waterways, accompanied by the sounds of wind and birds.

While a host of collaborators are bringing this installation to life, including Inter specifics (programming), Juan Rosas (modular structure), Gilberto Chavez (clay instruments), Juan Carlos León (production) and RC Design, the artist also explains her installation uses “recycled plastic, compressors with low electricity use, and the piece is modular so it can be packed with minimal crating—we are taking major considerations in terms of disposal.” These tangible actions to reduce waste are a welcomed shift in the environmental practices of the art world, where ecological impact is rarely a consideration.

Indeed, it is a well-known irony that shows tackling the environment often generate large amounts of waste that become visible once the exhibition is over, moments before hard rubbish collection. Candiani, alongside the Biennale of Sydney which includes this policy in its curatorial statement, seeks to rectify this incongruence by using natural materials, such as tree trunks, and implementing waste management for the de-installation of her pieces.

Based in Mexico City, Candiani spends much of her time showing globally in major exhibitions. Her oeuvre is known for strategies that seek to embody sound as politicised language, in large-scale installations that combine tactility with electronic and analogue technology. In For the Animals, 2020, shown at ASU Art Museum in Arizona, she collaborated with musicians, engineers, zoologists, and scientists to create scores for different mammals, ranging from the bobcat to the jaguar, both endemic to the Sonoran Desert.

Across video, drawings, and sculpture, the artist worked on this project for five years, alongside curator Julio César Morales. They were both seeking to create an understanding with not only other animals “but also the planet, where sound is common among its inhabitants. Since sound precedes humans, it is a reflection on listening and how frequencies can become an element that connects us all.” The work is also a comment on migration, prompted by the border issues in the Sonoran Desert, which is located in southwest United States and northern Mexico, where a wall dividing Mexico and the United States would inevitably affect the living conditions of these animals.

Migration is a recurrent theme in Candiani’s work, who began her career in the city of Tijuana, which sits on the contentious border of Mexico and the United States. The artist first started as a writer and arrived in Tijuana to work as an editor, where she became acquainted with the art scene. Her background in writing offers a linguistic quality to her artwork, where she seeks to create a sonic commonality between species, objects, cultures, and concepts. In 2015, she represented Mexico in the 56th Venice Biennale with Possessing Nature where, in collaboration with Luis Felipe Ortega, she exhibited a hydraulic sculpture and video installation meditating on the architectural role and visibility, or invisibility, of water in Mexico City vis-à-vis Venice. In 2011, she received the Guggenheim Fellowship for the Arts, and has been a fellow of the National System of Art Creators in Mexico since 2012. In 2018, the Smithsonian Institution awarded her the Artist Research Fellowship.

As for her inclusion in the Sydney Biennale—Candiani’s work echoes some of the biggest concerns we face today. Since the onset of the pandemic in 2020, Australia has implemented some of the harshest border restrictions in the Western world, which included mandating severe restrictions on citizens entering or exiting the country, with few exemptions, for almost two years. In parallel to this fixation with border control, we recorded the hottest day on record since 1960, contributing to the increasing anxiety about climate change that haunts this territory.

One can at once sense ecological migration as a defining characteristic of the 21st century, and picture the tensions—as well as ironies—that may continue to typify borders. Candiani’s body of work is perfectly situated to speak to these anxieties and prophecies, deploying sound to set up coalitions with other species while reminding us that movement is a natural state of being. In some ways, her message arrives to us like the chants of a transpacific bird, flying across the ocean to foreshadow the present. 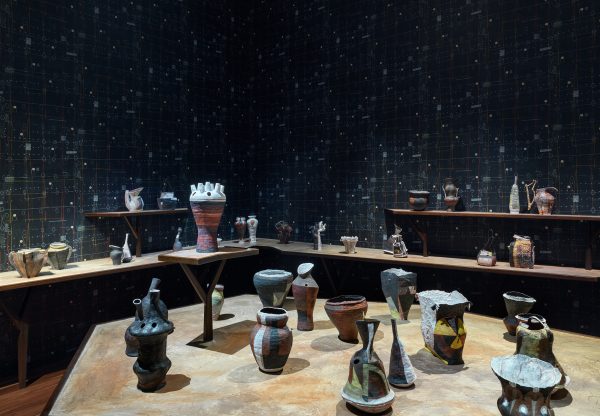