The idea of a series of Sidney Nolan paintings hanging in a newsagent’s shop window seems rather quaint. Yet this was the scene that greeted customers of Sheffield’s newsagency in the Melbourne suburb of Heidelberg in July 1942. Now, 75 years later, Heide Museum of Modern Art is reimagining this overlooked exhibition to consider its place within Nolan’s career.

Curated by Mark Fraser and managed by Kendrah Morgan, Making History: Nolan at the Newsagent showcases a series of landscape paintings depicting sites such as Heide and St Kilda, as well as early Wimmera works. Displayed in a newsagency window as part of Nolan’s second solo exhibition (and arranged by John and Sunday Reed), the works mark a pivotal point in Nolan’s depiction of the Australian landscape. As Morgan says, “It’s an important transitional moment in his career that no-one has ever really examined closely before.”

Nolan’s ‘newsagent exhibition’ took place just before his well-known Wimmera period in which he began to re-envisage the Australian landscape through a modernist lens.

The newsagency show was also held just after Nolan entered the army (he was called up in April 1942) and it highlights how, contrary to popular wisdom, Nolan was experimenting in landscape painting before his army service. “What this exhibition proves is that when Nolan went into the army and went to the Wimmera, he certainly did begin to change the way the landscape was viewed, but he actually started the experiments in Melbourne and no-one really realised that,” says Morgan. “The radical innovations he made didn’t come out of a vacuum, he was already experimenting before he left Heide.”

Despite the importance of the newsagency show, only four black-and-white photographs attest to its existence. In regards to the works themselves, none of them sold during the exhibition and many pieces appeared to wash away into obscurity.  While the four photos don’t clearly capture Nolan’s works (they are blurry and two of them are obscured by school boys looking into the shop window), Mark Fraser was able to positively identify five works, all of which will be on display at Heide. The curator has also chosen other paintings from the Nolan Estate, as well as works in the Heide collection, that represent a close match to the paintings shown in 1942. 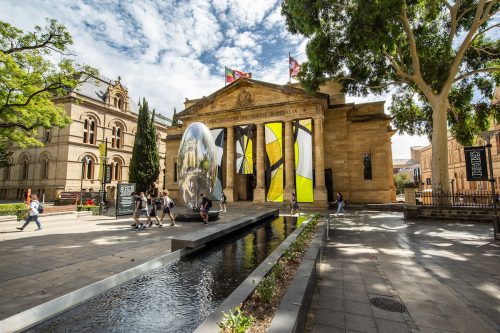 What does COVID-19 mean for both the present and future of Australia’s major galleries?