For an artist who occupies herself with ideas surrounding training and submission, Lou Hubbard can’t quite rein in time. In her solo exhibition Table Land, a herd of histories galloped throughout Sarah Scout Presents. Despite the constrained nature of the works and the small, quiet rooms in which they were stabled, the exhibition thrummed with the echoes of a distant stampede, particles of the past hovering in the air like a kicked-up dust cloud.

Personal relics were scattered throughout: a jumper crotcheted by Hubbard’s Aunt Molly dangled over a digital print in a display box near the entrance, while an old, never-be-fore-exhibited painting, Untitled (Landed), 1992, occupied a separate room.

Weaving throughout these domestic touch points were art historical references to Australian modernists, with hints of Charles Blackman and Sidney Nolan peeking out of the aforementioned Untitled (Landed). Russell Drysdale reared his head in Unstable Table, 2005, the book Sir Russell Drysdale’s Australia sitting at the bottom of the installation’s settler timber table, open to a colour plate of Children Dancing No.2, 1950. Crowded as it may already seem, colonial Australia also took a seat at this table in the form of carved wooden trinkets such as bookends, goblets, vases and apple-and pear-shaped salt and pepper shakers.

This layered context undercut the whimsy of a playful sight gag in Table Top, where horse toys and a hobby-horse head were accompanied by a clothes horse. Seen in the light of Hubbard’s interests, the droll joke was leavened by a serious meditation on domesticity.

All too often, notions of domesticity are lined up like so many sitting ducks, easy targets for cloying sentimentality or cutting satire. Presented in a narrow, insular manner, they make only narrow, insular statements. In Hubbard’s hands, domesticity is just one distributary of the stream of wildness and tameness, a broad, meandering stream that courses through personal, cultural and historical territory.

Hubbard once explained in an interview why she consistently draws on the horse as a key motif throughout her practice. She said it’s a reminder of the horse her father gave her for her 11th birthday and the dressage, riding and training she received. Hubbard would have learnt the painstaking and patient process involved in breaking in a horse, but she’s been wise enough to spare her works the same treatment. Although Table Land continued Hubbard’s interest in training and submission, the unruly elements brought together made it seem a miracle that everything stood still.

Table Land was at Sarah Scout Presents, Melbourne, from 1 July to 6 August. 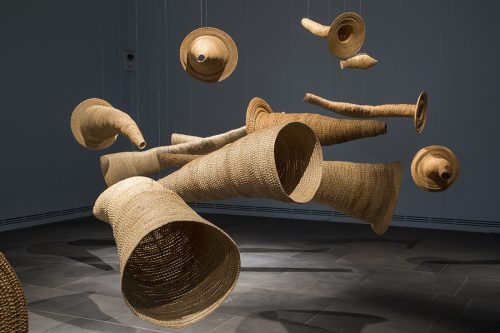 Ngarrindjeri weaver Yvonne Koolmatrie has been announced as the winner of the 2016 Red Ochre Award.