Lisa Garland and Lucia Usmiani are two artists with very distinct practices. Garland is a documentary photographer and Usmiani is a mixed-media artist who primarily uses found material in her intricate, mosaic-like works. Despite these differences they are both exhibiting together at Despard Gallery in Hobart.

Gallery director Steven Joyce says the contrast between Garland’s black-and-white photographs and Usmiani’s colourful work will present well visually. “They’re showing jointly and will feed off each other,” he says.

Garland’s documentary practice is centred on the north-west coast of Tasmania, where she lives. Having previously documented and photographed the lives of her family members, for her series Raw Backyards Garland turned her lens to other residents of Tasmania’s north-west coast for this exhibition, focusing on their homes and backyards instead of straight portraiture this time. The result is a sombre, but not necessarily melancholic, look at life on the coast from Craig’s Backyard to Fred’s Garden and beyond.

Usmiani uses materials and objects found at home, on her travels, and in daily life in meticulous mosaic arrangements that reflect her Italian heritage. Most of Usmiani’s works presented in Instinct are crafted from used food and beverage containers, throwaways and rejected items including olive oil packaging and Moo Brew beer cans. Beyond the larger hyper-colourful assemblages are four works fashioned from thousands upon thousands of matchsticks. Measuring around 50 centimetres each, they depict famous tourist attractions like the Statue of Liberty, the Coliseum and the Taj Mahal – souvenirs of perfect holidays.

Looking beyond the surface, the artists do in fact share certain similarities. Both Garland and Usmiani are inspired by their surroundings and present their definitions of beauty in different ways: Garland in her portraits of unassuming folk living their lives and Usmiani in her refashioning of discarded items. Having represented both artists for many years, Joyce says they also share a determined practice in their own rights – evident in their bodies of work.

For years I have been inspired by the stories and images of the Torres Strait islands above Cape York. 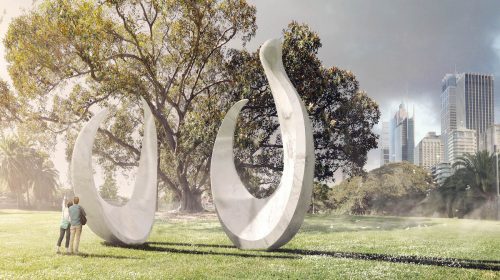 Brisbane-based Aboriginal artist Judy Watson has been commissioned to make a major public artwork for the City of Sydney’s Eora Journey project which seeks to acknowledge clans of the Eora Nation and honour the First Peoples of Australia.