Driving Filipino artist Leeroy New from Melbourne Airport to Bendigo in 2008, La Trobe Art Institute’s managing curator Paul Northam had to break some bad news to his visiting artist in residence: there wasn’t much of a materials budget for the six-week project ahead of them. So they would have to visit the tip and scrounge. New, renowned for enormous public sculptures, did not flinch. “What’s the tip?” he asked.

That project was such a success and had such an impact on New that he is now well known for enthusiastic use of recycled materials, a direction sparked by his La Trobe residency. When the artiist visited to make work for the Castlemaine State Festival, he made many trips to the local recycling stations for a thorough fossick. The result is a massive faux entrance covering up the heritage-listed façade of the Castlemaine Art Museum.

New made the framework for La Puerta Del Laberinto (The Door to the Labyrinth) at the La Trobe campus and then transported it to Castlemaine ready to apply his magic with bounty from his tip-trawling.

No one could have predicted what emerged, though his previous works have intertwined the visual arts with fashion, film and theatre, and he takes inspiration from mythology, film and video games.

Invited jointly by La Trobe University and the 2017 Castlemaine State Festival, in conjunction with the Castlemaine Art Museum and Manila’s Ateneo Art Gallery, New was also commissioned to make a sculpture for the central courtyard at the La Trobe Art Institute for the Mutable Truths exhibition. He was astonishingly busy during his three-week visit. Northam, though, has seen the artist in action and says he delivers “extraordinary results within ridiculous timeframes”. 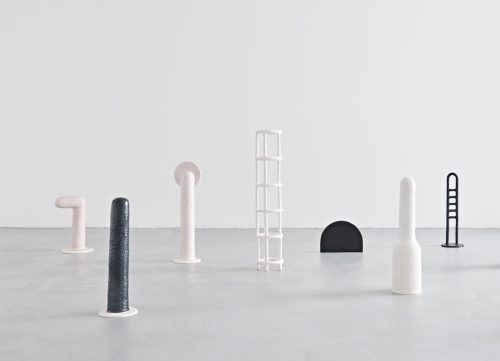 Art school affords future creators the time and space to experiment, understand and refine their craft. Grounded: Contemporary Australian Art at the National Art School Gallery harks back to these formative years. 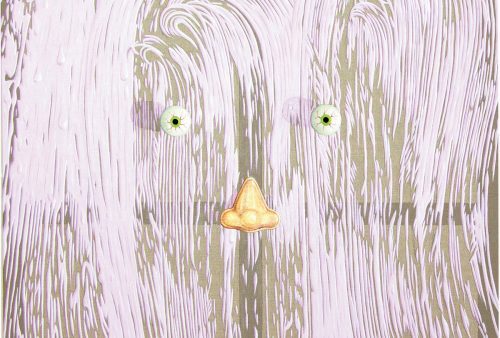 In conversation with Leo Coyte

Leo Coyte’s works have been likened to album art, rising out of a recognisable punk, DIY aesthetic, and buzzing with tension between abstract and representational.