Born and raised in Melbourne, Lara Chamas is a Lebanese-Australian artist whose practice deftly pulls on the threads of family, history, politics and prayer. Whether filming her parents, making casts of precious family objects, or screen printing her mother’s hummus recipe onto a stack of Bunnings rugs, Chamas’s work resonates with humour, warmth and tenderness.

Anna Dunnill: Growing up in Melbourne, what was your community like? Were you surrounded by other Lebanese Australians?

Lara Chamas: No, not at all. I don’t actually know many Arabs at all, in general, although I’m trying to familiarise myself with other Arab artists now. I was born in Frankston, so I had an incredibly white upbringing in terms of the people that were around me. Then 10 or 15 years ago we moved to Hallam, next to Dandenong, which is an incredibly diverse community.

AD: Your practice brings in lots of different family members and familial traditions; how does that take place?

LC: A lot of my research will stem from conversations with my parents. I really didn’t want to be who I was when I was younger, so I think as soon as I started to discover that aspect of me and it came through in my work—they’re happy for me to be asking these questions, and if I want to film them doing something, or film an interview, they’re happy to get involved.

AD: How much do you unpack the project before involving them?

LC: I give them a very basic premise because I want the conversation to be natural, I don’t want it to be forced. But there is a language and cultural barrier to them fully understanding the complete concept of a work.

And that’s fine—I mean frankly, anyone who doesn’t study art will have a surface-level understanding. But then there’s sort of a double and triple—because English isn’t their first language, and it seems very strange to them, why we value the things that we do.

AD: The exhibition that you’re currently working towards is called The entrance to Paradise lies at your mother’s hands. Where does the title come from?

LC: There’s a quote from the Quran that says, “The entrance to Paradise lies at your mother’s feet.” In some translations it’s ‘Heaven’, instead of Paradise. I saw it on an apron one time, in one of those weird gift stores in the Dandy Plaza. This was easily seven years ago, but it stuck with me. I was just like, “On an apron! That’s really hilarious!”

That quote to me reads, ‘worship your mother no matter what,’ which one could definitely agree with, but it didn’t give her the agency that I wanted it to give. I thought, “I’m sort of obsessed with hands—hands are coming through in all these videos and sculptures I’m making—what about ‘the entrance to Paradise lies at your mother’s hands’?”

AD: What is it about hands that you’re drawn to?

LC: I’m a maker and I understand things by touching them. I guess hands to me are what you make out of what you have. They’re your tools of creation.

AD: Tell me about some of the objects in the show.

LC: It’s a big, big, big culmination of so many things I’ve been working on and thinking about and making over the course of maybe three years.

I’ve developed this concept term; it’s based off a Quranic term, but I’ve adapted it to my own practice. The word is barakah, which essentially means a blessing, but it can refer to an object, something with spiritual energy. It’s reserved for special things, it’s not for everyday things. What I’m realising in terms of trying to trace and understand and feel my heritage and bloodline is that I’m drawn to these objects that I’ve cast because they have this energy to me, they have this story and this trace of having been touched by somebody I never met and resemble, or who I love.

These tools were handmade by my grandfather, who I never met, and who passed away before I was born; they have his trace, and were handmade for my mother to then make food for her family when she got married. They’re in my kitchen drawer, and my mum makes all these traditional foods with them. They are absolutely magical objects to me.

It all started with the pestle, because it’s something that she uses probably every day. I noticed one day that the pestle looks a lot like an anti-tank grenade. I was like, “Okay, this pestle needs a mortar.” So, I started to make a mortar. Probably my favourite object in the show is a mortar with my mother’s hands set in it. The two hands are together and it’s a cupping motion, like an offering. The position the hands are in is also something in prayer that’s called dua’— instead of a formalised prayer, it’s just baring the soul. You’re in this vulnerable position where you’re asking for whatever you might need, for help.

So, now I have a mortar and I have a pestle. My first instinct was, “Oh, I can crush some garlic, salt, add chickpeas, tahini—I can make hummus with this pestle and it can be served in my mother’s hands, how funny would that be?” But then the action of using the pestle in my mother’s hands was so violent, and the anti-tank grenade came back to me. I made a tiny anti-tank grenade, a pestle-sized grenade. And then the grenade as the pestle in my mother’s hands becomes a grenade in a terrorist’s hands. That type of grenade has been used in all of the Arab-Israeli wars, all of the Iraq wars, it’s specifically prevalent in that area. And it started to get me thinking—the other tools look so violent and are not immediately recognisable as cooking tools. Theoretically, the Middle East is this holy land, but there’s also all this bloodshed.

So that’s the premise of the show. There are about a hundred objects in it.

AD: What are some of the challenges of being a person of colour making art about your cultural heritage—but also about these universal themes—in an art world that is overwhelmingly a white space?

LC: In my earlier work I was making very overtly political statements linked to my heritage. I made this video of a lady in a burka; the chest is cut out and she has nipple tassels on. She’s dancing to a Lady Gaga song but there’s also explosions and screaming in the background from footage of bombs dropping. But I was like, “Am I going on safari on my own culture, and capitalising on that? And do I want to do that?” I had a lot of mixed reactions to the video but for the most part it would be laughter, and then, like, “Good on you, subverting this thing that’s oppressing you.” I really love that work actually, because it was about exactly that—it was about Orientalising the ‘Other’ woman. And it was exactly what everyone was doing as they were watching it.

This article was originally published in the May/June 2020 issue of Art Guide Australia. 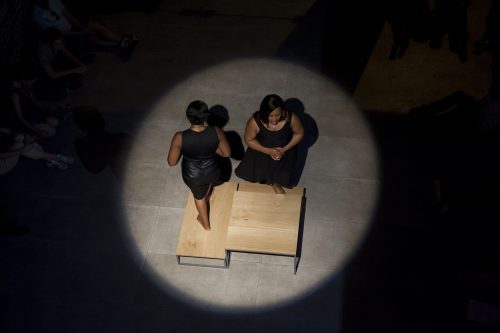 The Greek myth of Daphne—a nymph who turned into a tree after the Greek god Apollo chased her—echoes our current conversations on consent and climate change. And it’s the basis of ACCA’s new show.