A pebble, a metal pipe, a broken piece of a statue: these are the kinds of unwanted everyday objects that Koji Ryui collects for his practice.

He likes them destabilised and disintegrated, stranded between the status of object and material. Through swift and gestural, seemingly improvisational interventions, he turns these lost causes into something more. But before that, he needs to wrangle them.

“By collecting these things,” he explains, “I’m also collecting something of my mind. Some people might take a notebook and collect ideas in the notebook, but I seem to do that with objects and materials.”

As a result, Ryui took a different approach to the studio he was offered as part of the 2016 Artspace One Year Studio Artists program. It wasn’t so much a work- shop for production or a study for research as it was a space to allow these objects to breathe and move and interact with one another. If anything, Ryui is a caretaker; his studio, a menagerie.

“For me,” Ryui says, “it was a space to view objects and view works so that I could spend a little bit more time with what I collect and what I produce and to see what unfolds from that process of observing.

“It’s not just one object that I like to work on. Objects seem to bring up interesting qualities when put against something else, when the relationship creates something that wasn’t really there initially.”

Ryui left Japan for Australia in 1992, and returned last year for the three-month Australia Council Skills and Arts Development Tokyo Residency Program. “It wasn’t me going back to a culture that’s completely foreign to me,” he says, “but at the same time I haven’t really spent that much time there over the last 20 years.”

The past may be a foreign country, but even more foreign to Ryui is Japanese art, both contemporary and traditional. While on the residency, Ryui found himself drawn to the country’s di erent art forms, the way they interacted with each other and the immersive, sacred spaces they created.

But even before the trip, Ryui found himself unnecessarily shoehorned into Japan. “Whenever I do something really quirky or a bit silly, people go, ’Oh, that’s very Japanese, that’s very Zen.’

“It’s a very reductive way of looking at the work. I think it might be part of it, but that should just be a departure point for inquiry, whereas often that becomes the end point.”

Ryui is currently preparing for three exhibitions. The first, a collaborative show with Anna John at 55 Sydenham Road, will feature the usual abstract sculptural assemblages, along with some found-footage films. The second, a group exhibition at Casula Powerhouse titled Soft Core, will see Ryui rework his well-known sculptural propositions featuring smiley-faced plastic bags, using the space provided to create a more immersive experience. The third, a solo exhibition at Sarah Cottier Gallery, will see the introduction of more figurative and functional elements into his abstract sculptures, but is still very much up in the air. Then again, all three exhibitions are to a certain extent up in the air – and Ryui prefers it that way.

“There’s always room for smaller ideas to come in,” he admits. “I think making work and the work itself has its own autonomy and I like to allow that to develop.”

“It becomes more about a meditative process through making something rather than having precon- ceived ideas and executing them. It’s a negotiation.”

As far as Ryui is concerned, his most successful work is the work that happens quickly, the work that doesn’t seem fabricated, the work that appears to have come into being without any overly obvious signs of intervention on his part.

The results could be described as “vulnerable”, but Ryui is happy to use the words “shitty” and “shonky”, too. “For me, that gives it a bit more life and a space for empathetic engagement,” he says. “But some people might see that as a failure.”

Ultimately, Ryui’s art demands from the viewer the same patience and care he gives to his objects before they even become anything.

“I like to make work that you can live with and spend time with, work that will keep you company instead of work that is just viewed.” 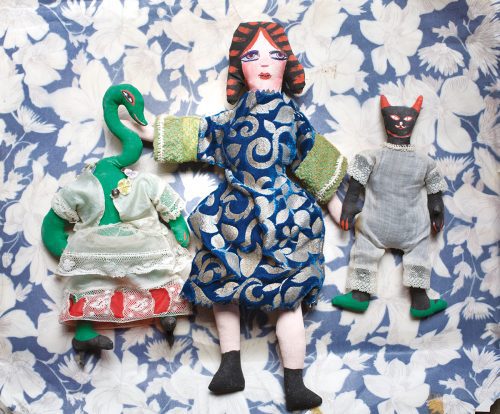 Australia may be mourning the loss of an icon, but we haven’t seen everything yet from Mirka Mora.