Kate Baker is known for works which combine glass and photographic processes to poetic effect. The two mediums have a long shared history– all those early glass plate negatives and precision ground lenses – but that’s not why Baker wanted to put them together. “Initially I think it came down to curiosity,” she says, “I wanted to know if it could be done and how far you could push it. It also aligned with my interest in image making, and my tendency to approach my work from a sculptural perspective – even my two-dimensional work.”

The Canberra-based artist came to glass, photography and printmaking when she was at art school in the late 1990s. “At that time,” she recalls, “hardly anyone was printing on glass and certainly not many were merging photographic imagery with studio glass.” As Baker points out, glass is a traditional craft. “Like ceramics, textiles and jewellery it came with its own history, processes and traditions,” she says, “From day one I wanted to take the material and break it out of those confines. I had been at art school for a couple of years already doing photography and sculpture, so I certainly had no intention of making pretty vases.”

Which is not to say that Baker doesn’t have a deep respect for traditional craft techniques. “Doing a four-year degree in the material gave me a lot of skills and technical knowledge always helps with a material like glass. It’s exciting to come at contemporary art making from that perspective, and with that skill set you can bring a new language to the table,” she explains. “Initially I was nervous that the material would be difficult to work with outside of the well-worn traditional parameters. But at the end of the day it is a liquid; it’s safe to assume it will do pretty much anything.”

In her solo show Sublimate, at Finkelstein Gallery in Melbourne, Baker is making use of the malleability of glass as well as its intriguing contradictory qualities: its ability to be both fragile and strong, transparent and opaque. The show features a major sculptural installation, Pulse, 2019, which combines sound, moving images and glass forms in pale pinks, blues and mauves which resemble torn bits of paper or scraps of fabric floating in space.

Two years in development, this work represents both a departure and starting point for Baker. “Up until this time I had been so consumed in the mastery of the glass-to-image relationship, I had stopped using the natural sculptural qualities of the glass,” she says. “So I started exploring forming the glass again and over time it became clear to me that what I really wanted was to explore the moving image and its relationship with different glass forms within an installation context. With the development of Pulse, and all the learning that has come out of that process, I am now ready to launch into a whole series of video and glass installation works.”

Like glass, a material always in a state of flux, Baker embraces the challenge of change and metamorphosis. “I chose the title Sublimate because it refers to the chemical transition of matter from a solid state to a gas – usually skipping the liquid phase,” she explains. “All of my work revolves around the theme of abstraction as a pathway to accessing a sublime and transformative space. But also that this is in essence housed within a physical space, based in matter that, although intangible, is not separate from our physical experience.” 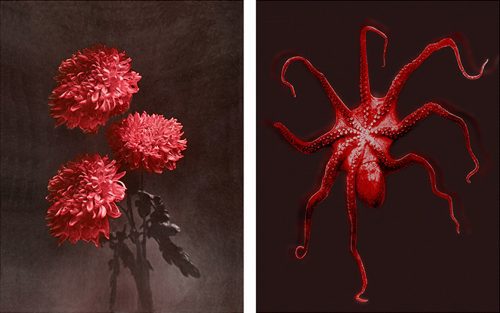 Pat Brassington: On a Clear Day

At first glance, the human protagonists in Brassington’s exhibition appear strangely familiar. On closer inspection, it becomes evident that they possess slight anomalies that render them unfamiliar.