Justene Williams was on the road to Sydney when we first spoke ahead of her solo exhibition, Project Dead Empathy, at Sarah Cottier Gallery. The back of the car was full with the stuff that comprises her anarchic installations, and I imagined over-long mannequin arms stretching around headrests as we spoke.

Williams has been living and teaching in Brisbane since July, and has set up her studio on the tiled ground floor of a tall Queenslander. Here she has repurposed sets from past performances, made spellbinding camera-less photographs and manipulated mannequins into impossible contortions. A driving force underlying this process has been the anxiety of upping sticks and settling in a new place with new people, news rules and new tensions.

Best known for her epic performances with enormous fabric sets, elaborate costumes, multiple performers and avant-garde scores, Williams acknowledges that there is a shift when making work for a commercial gallery; it’s like the difference between runway and ready-to-wear. The concepts, however, remain consistent. Central to Williams’s practice is an interrogation of how images are constructed, and an ongoing translation of the sensibilities of Dada and Futurism into a contemporary, domestic, Australian vernacular. Her work veers joyously between the resplendent and the absurd.

Never one to let good materials go to waste – her style has been described in the past as “dumpster diva” and “baroque grunge” – Williams has been reconfiguring the set of her performance piece A Metal Cry, presented at Carriageworks for The National in 2017. Sections of the enormous fabric backdrop have been spliced and recombined into hanging textile works with slashes of metallic silver across angled cuts of high-vis orange, yellow stripes and pink-purple pleats.

Although there is no live performance in Project Dead Empathy, the body is present in mannequins with absurdly extended limbs and necks.

Their lurid, glossy greens, yellows and pinks are draped with fabric and in one case, implanted with flashing tubes of light. For Williams, sculpture can fill in gaps where performance might fall short: they are bodies as blank slates, to be positioned at will and frozen in place.

The body also appears in camera-less photographs, which Williams and printer Sandra Barnard describe as ‘bellowgrams.’ Objects are placed inside the enlarger’s bellows, interrupting the light at its source (rather than at its destination, as with photograms). Williams’s images are a combination of both photogram and bellowgram. Small objects are crammed into the bellows while mannequins (or the artist’s own body) mask the paper. The results are striking, with ghostly bodies and strange shapes floating against a dark background, as if they are constellations in deep space.

Mid-week I message Justene to ask for some progress shots of the install. It is looking surprisingly minimal, but satisfyingly weird. In the gallery’s full-length window an unsettling scene unfolds: the mannequin with tube lights projecting from its crotch is lying face-up, a VR headset strapped to its face. Another figure kneels over and peers into the blind goggles, as if trying to behold what the other perceives. Suddenly the title of the show makes sense. All we want is to see, and be seen. We stretch out beyond the limits of our limbs to reach one another, but we have become slick and shiny. Nothing sticks. 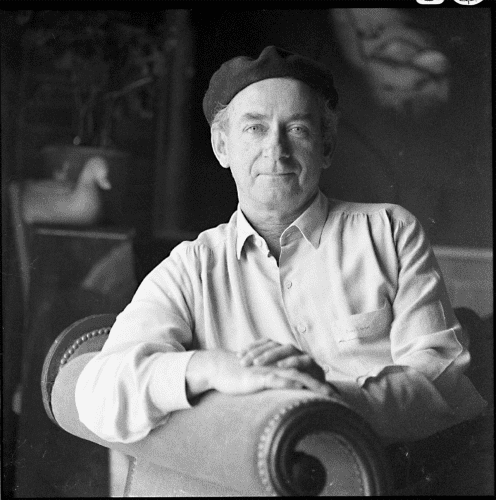