Fifteen artists have been commissioned to respond to the late photographer Max Dupain’s image Sunbaker, 80 years after the seemingly carefree male subject was caught on camera. One of the more unusual approaches to reimagining this much reproduced photograph comes from Sydney artist Julie Rrap, whose own work has long been concerned with using the body, including her own, as a performance tool, encouraging and involving the viewer in a deconstruction of the human form.

Steve Dow: I understand your work for the Dupain exhibition is a bronze cast; what approach have you taken?

Julie Rrap: Obviously you know the pose of Sunbaker. When they first asked me, the only thing I could think of was how I could photograph that pose from underneath. I then decided I would cast somebody doing that pose.

So the pose is in negative in bronze. It’s like a performance sculpture: people walk up to this object and they can put themselves in that same pose. Now I’m working with a fabricator who is making a steel support, so that the object ends up looking like a lectern.

I’ve called the work Speechless, as a political comment on the photo, taken in 1937, just after the Depression and before World War II, even though it was shown later.

Now, that iconic image represents the person who has just been for a swim, lying on the beach, and the idea of Australia as a pleasure/leisure place. Although it was Max Dupain and a bunch of his friends on holiday [at Culburra on the NSW coast], it was taken in a period when things were tough economically.

Now, my slant is that this image is a misrepresentation of Australia, transported into this moment, because our beaches are not really innocent places any more. It’s a bit like someone has gone to sleep at the lectern; that they’re asleep on the job.

JR: One hundred per cent. The show is interesting as to who they’ve asked, because there are some Indigenous artists as well. My first thought was, how do I see that pose from underneath? It’s a bit like the underbelly of that image.

It’s formally a very strong image, and works in that modernist way. We can read photography formally and compositionally, but at the same time we always read it informationally. Information coming from it is changing as Australia changes.

Even though Dupain innocently took that photo as a bunch of people down the coast on a holiday, once it gets decontextualized, it becomes an image people project meaning onto. I wanted to treat the photo as an image that travels in its meaning, rather than treating it as a modernist photograph.

SD: Has Dupain been influential on your art?

JR: It was funny, the curators did a little launch at this collector’s house who happened to have Sunbaker. Rex Dupain, Max’s son, who I know a little bit, was there. I was one of the artists invited to give a speech.

I recalled in the speech my first show, in 1982, where I used myself in the nude in this installation, and all the photos were hanging like a sculpture. I said, “Rex, I hope you don’t mind me saying this, but I was told your dad came into that show in 1982 and said, ‘This is not photography.’” It was an era of very straight, documentary photography.

We all laughed, because Rex said, “Yeah, I can see my dad saying that.”

He was a photographer of a certain era with strict ideas about photography, which I quite admire, but I was a young thing coming from another angle, so I was quite pleased Dupain had made that comment, because I was trying to use photography not as photography only.

SD: Do you think Dupain objectified the body, and how did he view the female body?

JR: Yeah, I’ve obviously worked with that idea of the female body being objectified, but I think his generation was more interested in the formalism of the body, male or female: seeing it more as a form in an environment or in a space that they composed to look strong or sensuous.

I don’t think they were necessarily objectifying the body in a gendered way, but then, it’s hard to know. Sunbaker is depicted in a quite heroic way, but Dupain wasn’t necessarily thinking about it like that. Maybe these things are innocently conceived, but not necessarily innocently perceived.

SD: Your painting, sculpture and video, as well as photography, has always been concerned with representations of the body. Would you define what the human body can be more broadly perhaps than Dupain did, on the evidence of his work?

JR: I think I do. In a sense, I’m working with that same, very classical material, but it’s narrow and broad at the same time, because you’ve got that whole history of how the body has been depicted over time, whether in its fullness or in fragments of itself, in different materials.

It’s a touchstone: we all have a body, we’re all responsive to it, whether we’re repelled by or attracted to it. So, for me, it’s an incredibly rich area to play with. It’s very flexible subject matter. It has proved a fertile area for me, because I’m still going after 35 years, working in that domain.

Casting for me has a close relationship to photography, because you produce a negative of something, and you reproduce from it. In the same way we have a relationship to photography as a truth-making device, what we see is what we see. In a funny way, sculpture, in particular casting from a body, is very similar to that because it has a suggestion of fidelity. But then, of course, you can manipulate it.

Under the Sun: Reimagining Max Dupain’s Sunbaker
Monash Gallery of Art
6 May – 6 August 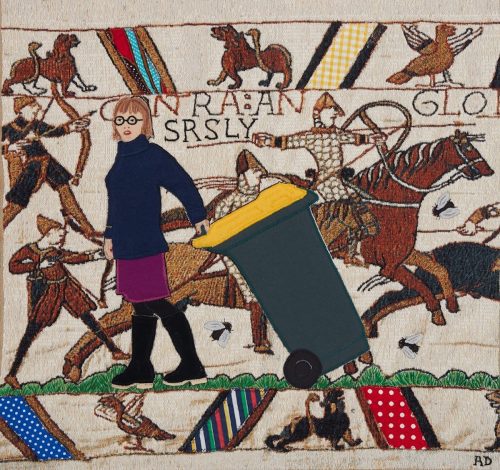