Journey through time and space with Other Suns

Journey through time and space with Other Suns

Other Suns features work by both Australian and international artists who investigate the relationship between science fiction cinema (cult, pop and pulp) and art. The exhibition features a combination of audio-visual, sculptural and painted artworks that attest to the diversity of the genre and its interpretations of the world and the future.

There are enough humorous and playful appropriations of science fiction paraphernalia to keep anyone with a passing interest in the genre happy. Particularly entertaining is Soda_Jerk’s Astro Black, 2007-ongoing, one of the duo’s well-known remix works, this time of hip-hop and sci-fi. It playfully engages with ideas of Afro-futurism (which focuses on imaginative visions shaped by the African diaspora) and its role in black culture in America and the world. The relationship of Soda_Jerk’s practice to hip-hop establishes an unspoken, but none-the-less pervasive, appreciation for the form; a tribute to the history of remix.

Marne Lucas and Jacob Pander’s Incident Energy, 2013-2014, and Ian Haig’s Untitled Syndromes, 2017, both bring the body to the front and centre, alluding to the pulpy horror genre. Haig’s work is a digital manipulation of two faces in jagged planes. This, we get the sense, is a different restructuring of the body that we are undergoing, as opposed to the bio-horror of auteur David Cronenberg’s diseases and mutations, and one that is more suited to the digital restructuring of our age. Elsewhere, Lucas and Pander’s collaborative multi-screen video utilises infra-red cameras to distort our image of the body, giving its subjects fearsome appearances, extra-terrestrial in their aspect, and again offering us a vision of the intersection of technology and the body in the modern age.

Another interesting work is The Unlimited Dream Company, 1983, a film by Sam Scoggins featuring a section in which author JG Ballard [whose 1979 book the film is presumably named after] answers a series of yes/no questions as a camera slow zooms in on his eye. Ballard is surely one of the main figures in the art world’s current fascination with science fiction, known for his ominously accurate prediction of the intersection of media, celebrity and politics (in the figure of Ronald Reagan) that we are seeing reincarnated in our age. He is also famous for making Crash as an art show before a book. Ballard is cited in at least two of the artworks and regularly in the Other Suns catalogue. The film is a fascinating picture of this cult sci-fi hero.

Interestingly, due to the nature of its theme, the show is remarkably nostalgic, and while it may be understood through the genre of science fiction, it is perhaps better understood as being about the genre.

It is an ode to an idea of the future that has fallen into the past, a fond rear-ward glance at the aesthetics and cultural detritus of an age that was obsessed with, and optimistic about, outer space and frontiers.

Other Suns looks to a time before we turned inward and the reality of the microprocessor and the computer became more important than physical movement through space. In this sense, there is something that appears to be missing in the show – some idea of the future that has disappeared, to be replaced by another feeling entirely, one that sometimes borders on melancholy. It is, however, a journey through time and space well worth experiencing. 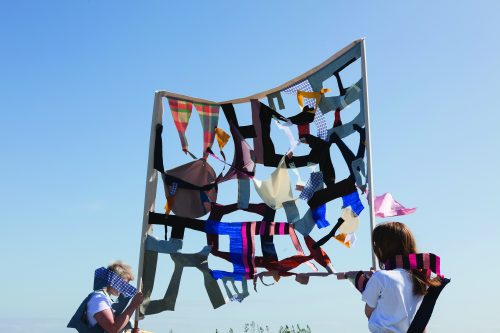