At about 5.40am on 22 September 1882, fire broke out in the Garden Palace in Sydney’s Royal Botanic Gardens, just three years after the domed building, designed by James Barnet and made from iron, glass and wood, had opened for the Sydney International Exhibition. The building, its ground floor covering more than two hectares, was consumed within 40 minutes. No one knows how the fire started.

Countless Aboriginal artefacts were lost in the Garden Palace fire, only some of which were catalogued. Items such as collections of shields, seen by Europeans as weapons of defence were not appreciated as works of art in themselves, with fine carving. Most likely, these works were stolen by anthropologists from the disarmed and disenfranchised first Australians.

Almost 20 years ago as a young art student, Jonathan Jones, of the Wiradjuri and Kamilaroi nations of south-east Australia, went to the Australian Museum to research the origins of his people in the Murray-Darling region.

“I felt a bit lost and that I wasn’t really belonging or connecting to anything,” recalls Jones, now 38. “Then at the museum I found there was all this cultural material that did belong to me, but it had been destroyed. It was a very sad moment.”

A more devastating realisation was that Indigenous human remains had also been destroyed as the Garden Palace was razed to the ground. “A ‘collection of diseased skulls’,” Jones says. “They don’t say where from.”

Over the past 20 years there has been an Indigenous cultural renaissance and a blossoming of Aboriginal languages. The new mood, says Jones, enables his latest artwork, a sculptural and sound installation called barrangal dyara (Eora words for skin and bones). The artwork is situated on the site of the Garden Palace and is the 32nd Kaldor Art Project.

“The most difficult element,” Jones reflects, “has been how to tell the story in a way that doesn’t compound existing feelings around colonisation and the cultural destruction that took place. To not make people feel worse about that history, and instead use this story to make people feel empowered and that we’re still moving forward. It’s also a personal struggle, because the loss of those objects in the fire has troubled me for a very long time.”

Made from gypsum, a material used in Indigenous mourning ceremonies, these shields are blank and white, “almost like bones.” The shields are laid out to mark the entire footprint of the Garden Palace building. “The blankness talks to the complexity of colonisation,” explains Jones. Where there was once a dome, a meadow of kangaroo grass has been planted.

Gadigal people used the same site for ceremonies prior to the Garden Palace being opened in 1879. “The only documented ceremony in Sydney is on that site,” Jones points out, referring to An Account of the English Colony in NSW, 1798, by judge advocate Colonel David Collins. The author observed an initiation ceremony in which boys had teeth removed.

“Collins convinced them, I’m not sure how or why, that he should hold onto the teeth,” Jones says. “The whole idea about [the Eora] inviting these British people to watch was to show they had a very strong culture. Collins of course told them he wouldn’t tell anybody about it, that he would hold onto these teeth, but of course, he published it in his account of the colony. Immediately, again, we have the collection of Aboriginal cultural material, and Aboriginal people being betrayed.” 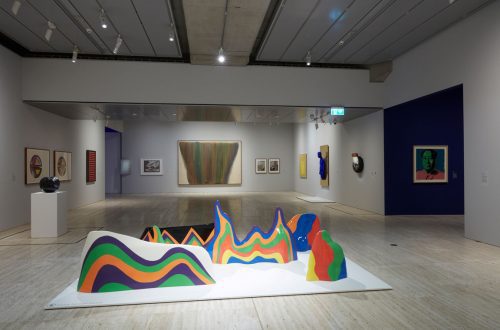