John Stezaker sifts through stacks of found photographs. Film stills, headshots, picture postcards; they’re sourced from flea markets and online, sorted according to gender, scene, and type. He makes a cut – usually just one or two, maybe none at all. Slides two sections together. The effect is uncanny.

A British conceptual artist who now works primarily in collage, Stezaker is drawn to the headshots of hopeful actors and actresses from the 1950s, made rare by their slippage into obscurity. These photographs can be physically held, their glossy texture between finger and thumb. Stezaker wields a scalpel with medical precision, slicing through faces, eyeballs, and necks. There’s only one chance to get it right.

There’s significance in this. These days, it’s more likely that a one-off image would be scanned and popped into Photoshop, shrunk and enlarged, flipped and colour-corrected, duplicated and split in a hundred different ways; any mistakes repaired with a quick Ctrl+Z.

But when Stezaker slices two images on the diagonal, joins mismatching halves, there’s a tension at the seam. The physical cut is visceral.

For four decades the artist worked quietly in his basement, rarely exhibiting. But in the mid-2000s Charles Saatchi began collecting Stezaker’s work, and the rest of the art market quickly caught on.

“I conceived Lost World as a broad introduction to his collage work,” says Leonard. “For coherence, I limited myself to collages using film stills, actor headshots, and postcards.”

Leonard himself came to Stezaker’s work via his arresting Masks series, in which postcards are laid over actor headshots –“places over faces,” as Leonard says. The lines match up, producing a final, unnerving image.

“I didn’t know if Stezaker was driving this idea,” Leonard explains, “or simply coaxing out something implicit or latent in the material. That issue – agency versus fascination – hangs over the whole project.”

Hand-coloured or printed using offset processes, the postcards’ bridges and rock formations are slightly lurid in colour, their layers imperfectly aligned. Placed over the face of an actor or actress, the twin arches of a bridge become eye sockets. The blue sky at the end of the tunnel becomes a hole in the head, a smiling mouth visible beneath. They are dead, presumably, but so happy.

Stezaker plays on visual suggestibility. He leans on our instinct to find a human face in anything; exploits our understanding of subtext and irony. With one or two carefully planned scalpel movements, he makes subtle shifts that fling two perfectly ordinary pictures, when combined, into the realm of the grotesque.

In the Marriage and Betrayal series, two headshots are spliced together down the middle, on the vertical or diagonal. If the lips and chin line up, the hair and eyes are usually out of kilter. In a cultural moment where the dialogue increasingly leans towards a fluid notion of sexual preference and gender, these collages point simultaneously forwards and back.

Lost World also includes a number of three-dimensional works from the 1970s: dismembered mannequin hands on small plinths, a series called Touch when palm down, Give when palm up. Leonard says his decision to include these older, 3D works was “intuitive”. These hands, their long fingers and once-perfect manicures now grubby, exude B-grade horror, hacked – we assume – off a pretty blonde plastic corpse.

“I was intrigued by them; I liked them,” Leonard says of these. “I found them creepy-sexy. They extend Stezaker’s thinking about collage into sculpture, via the found object.”

Stezaker’s work is obsessed with artifice, with revealing something – but it’s not always clear what. Photograph after photograph shows slicked hair, wide smiles, and pristine makeup. The landscape postcards present an idyllic countryside that probably no longer exists (or is swarming with people and selfie-sticks). Slice. Genders – performed with 1950s dedication and rigour – are seamed together: sweatervest with lipstick, pipe with bangs, ear with nose, eye with mouth. Who are these actors and what parts were they playing? And what parts are they playing now?

A woman’s body is cut out, replaced by an empty circle; men gaze upon this holy white space.

A row of men stand behind a guillotine, the condemned man’s head sliced off by an unmerciful scalpel. Two figures lean towards each other; the overlaid postcard transforms their bodies into two rocky outcrops, an immovable passage between them, forever separated. A video work, Crowds, reanimates film still into a flickering jumble of mass bodies.

Stezaker combines horror and humour to produce startling, unsettling work. It’s funny-weird, “creepy-sexy.” You can almost feel the scalpel on your skin. 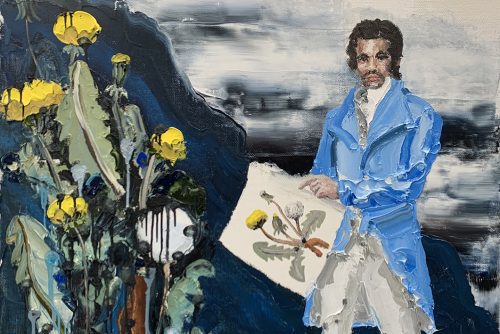 Joseph Banks is painted in the late afternoon under moody dark clouds in a landscape better suited to board shorts and thongs. 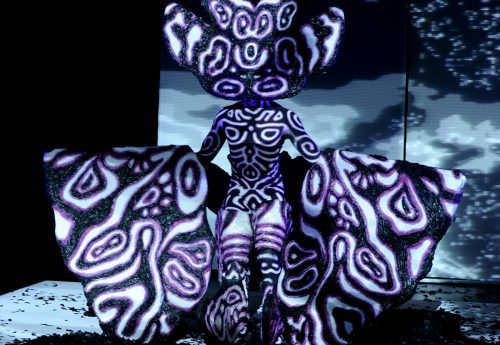 Local and Korean artists pick through environmental degradation, disaster and detritus in New Romance: Art and the Posthuman.