Vivid yet mysterious, Mikala Dwyer’s installations connect a range influences and curiosities including the mystical, occultism, constructivism, Dada, Bauhaus, memory and sexuality. Often using materials like textiles, plastic, plywood and plants, the artist creates highly experiential, affective spaces. With a four-decade practice, and a new exhibition on avian life, Dwyer talks about the mystical, daydreaming, and her process of ‘not-knowing’.

Tiarney Miekus: The spiritual, mystical and occult weave throughout your work, particularly in the last 15 years. How did they come into your art?

Mikala Dwyer: It’s something I have been interested in since I was young, and as I’ve got older it’s developed into a parallel belief, and scepticism.

TM: You’re compelled by the mystical side of movements like constructivism and Bauhaus, and these spiritual elements were generally seen as inferior—do think that’s because the spiritual is often seen as feminine?

MD: That’s probably part of it, but I do know in the Bauhaus, when all the mystics got chucked out of the Bauhaus, it was mainly the men being kicked out. I think irrational and more mystical knowledges were not as economically viable, and the more constructivist, architectural forms were probably more conducive to mass production and building good solid foundations. It suited industry better, in some ways. It’s so convenient to expel anything that doesn’t fit the capitalist motion. But it’s ironic now because the whole wellness, spiritual industry has been commandeered by capitalism anyway. You can’t get away from it. I missed my calling. I could probably make more money as a palm reader or tarot reader now than I could have earlier on. I always had that as a backup plan. If everything else failed, I’d just set up a little table by the side of the road and read tarot cards or palms.

TM: Have you read tarots and palms before?

MD: Yes, but I haven’t charged anyone for it!

TM: In trying to create an otherworldly quality in your work, I wonder if you’re a daydreamer?

MD: Oh yeah. I wish I had more time to daydream because it’s such a productive state of mind. I think one of the great shames is the ignorance that people don’t see how productive daydreaming is. It’s really important to have unstructured thinking time. That’s where people’s brains function the best. Everyone should have that time.

TM: You once talked about your mother, who was herself a jeweller and a silversmith, and she said that you’re “not allowed to call yourself an artist, that’s for other people to decide”. I thought that was quite amusing and humbling. Was there a moment when you felt like an artist?

MD: That’s a good question. It’s not something I’ve really preoccupied my thinking with. If I make something that people can agree is anything close to okay, then I’m very happy. But I used to hate it when she [my mother] said that. I thought it was really mean, but I do think she had a point. It’s a cultural agreement. We can muck around in the studio and we can think we’ve made something—and we have to be working from that premise. I find that it’s good to be making your work, not worrying too much about what anyone thinks. But when you bring it out into the daylight is one thing, but then with other people looking at it, it’s a whole other thing. You might think what you’re doing is so interesting, but actually it’s completely irrelevant. Like, who needs another white, female, middle-class perspective on the world? How do you make yourself relevant at any point in time?

TM: To me that quote from your mother implied a generosity to the viewer, and when I walk through your installations, they feel very generous. It seems like you care how people experience the objects and space.

MD: I do really try to listen to the objects and materials I work with, so that generosity is not mine, it’s the object’s. I guess I’m trying to identify whether an object might have some weird collective resonance, or whether it’s just my view of it, but I do practice knowing how to be comfortable with ‘not-knowing’. If you’re comfortable in the experiment of not quite knowing what you’re doing, I think the work can be open to others. You’re in this not-knowing together. I think a lot of people come to contemporary art just feeling like it’s totally inaccessible, but if we’re both in the same boat of finding it inaccessible, including the artist, I think people can feel it. There’s a difference from making work that’s trying to be not accessible—like it’s guarded, or it wants to be spiky or unapproachable for a reason, and there’s many good reasons to do that. Sometimes it’s important to bring out those encounters of being uncomfortable.

TM: Is it hard to access that state of ‘not-knowing’ when so many elements of the art industry and arts funding ask you to outline your art before you even start creating it?

MD: It’s really hard. I think people aren’t comfortable with not knowing, so they want to be sure of their product before it comes to the gallery. People don’t really want to be surprised too much. I think sometimes it’s a lack of trust as well. You need to trust that if you’ve invited an artist into something that you’ve got to go with whatever they do: whether it fails or it’s fantastic, you just have to go with it. And sometimes there are vast amounts of money in the mix and stakeholders, and sometimes you have to be a responsible person and be clear about what you’re doing. But you can also be clear that within what you’re doing, you don’t really know what you’re doing. You can approach it so that you take people into that not-knowing with you.

TM: When you’re using everyday materials in your work, do you consider why some objects resonate with you and others don’t?

MD: Oh God, there’s a lot [of objects] in there. I have storage issues. But I’m actually very particular about what I use. It usually comes out of an idea or a feeling or something that you’re thinking about, and then things present themselves perhaps in the street or in a rubbish pile or a shop or—well, you might actually have to go and dig something up or get someone to fabricate something depending on what you’re thinking. I just remember—maybe it was in the 90s—but I was thinking a lot about boundaries and bodies and skins and porousness, and the blurry line of things not beginning or ending where you think they did. The materials that I was happening upon at that time were things that could hold those ideas, like neoprene or pantyhose or Elastoplast. But the list is so vast because I tend to work across so many different materials and ideas.

TM: With your experiences of working in aged care, being a parent, and recently undergoing chemotherapy, I feel like they’re all things that require a great emotional labour. Do those experiences make their way into the work?

MD: Absolutely. If I’m honest about it, all the work is really personal. As much as I try to make it accessible to everyone, at the end of the day you’ve only got your own stories to filter everything through. They’re also the experiences that give you tools, somehow. Like my chemotherapy, I found it really interesting. And I think that’s the thing of being an artist is that you’re just incurably curious. So rather than go, “Oh, woe is me, I’m going to have chemo,” you’re going, “Oh wow, what’s that? Wow, those colours they’re wearing are really cool. Those chemicals are really interesting.” I think it gives you great survival tools because you’re curious rather than fearful. Most of the time.

TM: That reminds me of when you said, “Within most artists, there’s a total overwhelming need, hunger, obsessive, compulsive, mania addiction to it. Because you’re willing to let your whole life go to crap for it.” I was going to ask if that ever goes away, but I guess it doesn’t?

MD: No, I wish it would sometimes! I’m still working myself to death. My daughter despairs sometimes. She’s like, “Can you just slow down a bit and just take it easy.” But I think, “Not yet, not yet.” And I’m not the only one making art like this. But luckily, I can keep it in perspective a bit.

Due to currently Sydney restrictions, Roslyn Oxley9 is closed, however this exhibition is available to view online here. 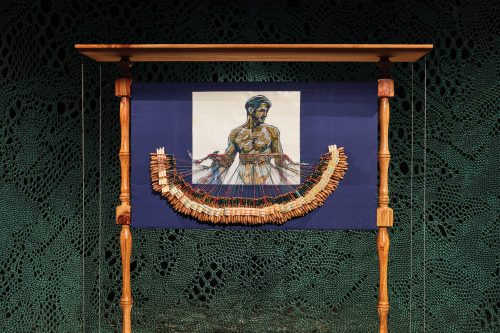 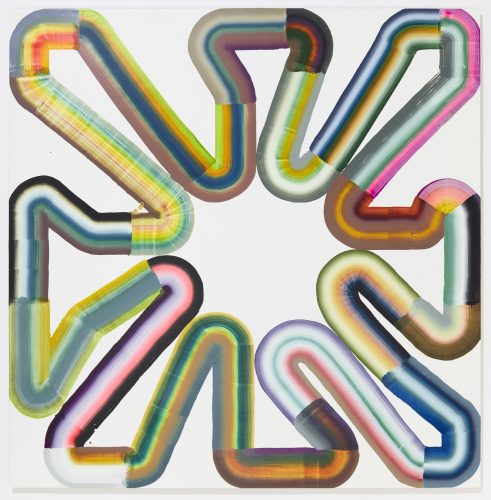