Leanne Tobin is a Dharug woman, living on Dharug Country at Springwood in the lower Blue Mountains of New South Wales. The Dharug of the greater Sydney region were among the first to bear the brunt of invasion, including disease, slaughter and institutionalised policies of ‘assimilation’. Yet through her practice, which spans painting, playwriting and large-scale public sculpture, Tobin infuses this history with stories of connection, resilience and triumph.

Tobin, who often works collaboratively, and has a studio based under her house, is known for bringing both cultural and personal Dharug stories to light, especially those connected to place. She talks about the way these stories change how she views the landscape, the importance of caring for Country, and her new work for the 23rd Biennale of Sydney.

Place
Leanne Tobin: Growing up I didn’t know about my Aboriginality. I didn’t know about my heritage, my nan hid it. I was actually in the Northern Territory, working in Kakadu as an Aboriginal resource teacher when I found out [in 1986]—which is quite weird. I’ve moved around a lot, and I always respect Country that I’m on; I’m very careful. So it was really difficult for me when I was up there. I was surrounded by Aboriginal people who were totally immersed in their cultural experience and still connected to ancient ways that a lot of us in Sydney have had disrupted. I was very aware, very respectful and, you know, almost fearful of even saying, “I’m Aboriginal too” or “I’m connected to Sydney”.

I’m now on Dharug Country [in greater Sydney]. And being on Country has given me permission to speak loudly; to tell the truth about what has happened to the Dharug, to my family, and also to make work about the shared need to care for Country. That’s fundamental; it’s why I do what I do.

I’ve been back on Dharug Country since 1997, but here in Springwood for the last 11 years. And I was only able to build this studio underneath my house because I won the Parliament of NSW Aboriginal Art Prize in 2011. I won it with a painting called Defending Country. I’d been having a back and forth conversation with the land council who were denying our existence. I was so angry. I just had to put this painting together. And next thing it won the $40,000, which I just did not expect! I see myself as so blessed and so lucky.

Process
Leanne Tobin: Along with making collaborative artworks and teaching, I have a mural painting business and I’ve been working on large-scale urban design commissions—which I never saw coming, but a lot of urban planners now want to bring traditional stories from Country to the foreground. So the studio has become an ideas space. I start with ideas here and then they get taken in different directions and put into different formats.

I realised I used to do a lot of pretty paintings and while they’d sell, they really didn’t have the stories. Coming back to Dharug Country, and finding my family connections down here, generated a huge surge in my work. I felt compelled to put forward our untold stories. People don’t know local Aboriginal stories from Sydney.

Stories change how you view the landscape. And that’s what I try to share with all the work I do. A lot of my collaborations are with people who are coming together with the same sense of purpose—whether they are family members, or other artists, or my Aboriginal students at TAFE—they’re wanting to reconnect, to get stories out there; to highlight stories of place.

It’s incredibly rewarding working with other people, and you have to make sacrifices too. This is a big one that I’ve learnt from collaborations: sometimes you have to hand over something that you know you could do yourself, because I want people to come along for the ride. I don’t want it to just be about me, I want other people to be lifted up.

Projects
Leanne Tobin: My current urban design project, working with UAP Company for NSW Transport at Schofields, highlights that the area [Schofields, a suburb on the fringe of Sydney] is on a sedimentary red silcrete deposit on Dharug Country, where spear tips and scrapers were sourced and traded up and down the coast. I’m also in an exhibition, Dyarubbin, The Hawkesbury River, which is about Dharug cultural connection to that river. We all need fresh water and clean air to live. That’s a shared concern.

The theme of this Biennale of Sydney is rīvus. It means ‘stream’ in Latin and I’ve done work about rivers before, so I guess that’s why they invited me. My piece for the Biennale is called Ngallawan. It means “we live, we remain”. We’re still here, despite everything that has happened, we live and we remain here on Country. Ngallawan has three components: an animation, an interactive weaving project, and a sculptural installation of glass eels which are being fabricated by Ben Edols and Kathy Elliott.

It’s harking back to a creation story from this area [Dharug Country], which is shared by Gundungurra and Dharug mob, about Gurrangatty, an eel-like Ancestral Being that created the mountains and the rivers here.

But it’s also about the amazing life cycle—the transition—of eels. The adult eels swim all the way from the rivers to the Coral Sea, then the babies, which are clear and commonly called glass eels, drift back to their ancestral homes. And when they enter the rivers in the estuarine environment they start to change colour. They become the colour of the river. So I see it as a metaphor for Dharug people. From being transparent, we are now becoming visible; but we’ve always been here. Ngallawan. 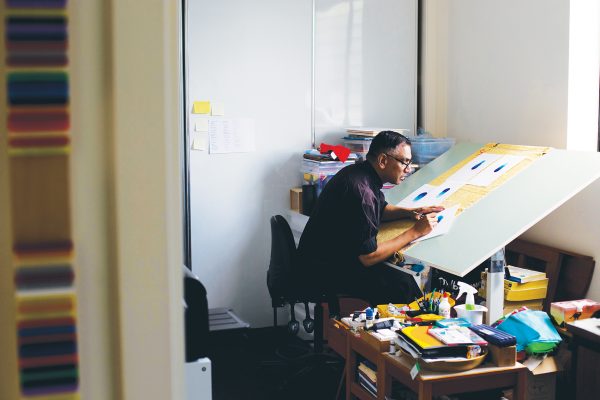 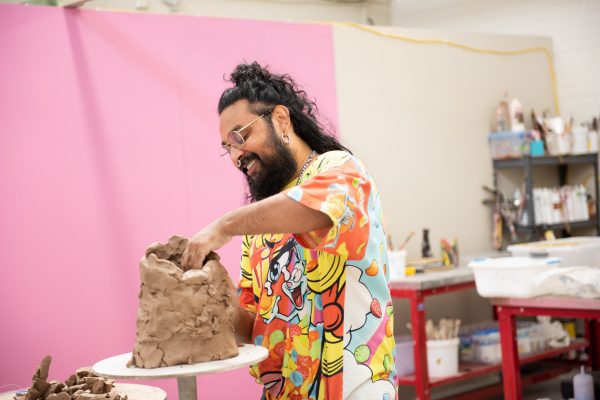 Ramesh Mario Nithiyendran is known for his iconoclastic figurative sculptures that are bright, bold and larger than life. We visited the artist’s studio to learn more about Nithiyendran’s process, and hear about his inclusion in HOTA’s summer show.