When an artwork leaves an artist’s studio and enters the gallery, its interpretation is shrouded by the context in which it temporarily rests. The logic of a group exhibition in an institution is laid out on wall text and marketing collateral. An exhibition of a private collection often has no such conceptual scaffolding, with the assemblage of works a reflection of the collector’s taste, which can create a refreshing air of mystery or potentially a frustrating lack of purpose.

Corbett and Yueji Lyon’s Housemuseum in the eastern Melbourne suburb of Kew, which combines domestic living spaces with gallery walls, has been open for public tours since 2009.

The new neighbouring Housemuseum Galleries that sits beside the Housemuseum operates as a private museum. In Full View: works from the Lyon Collection is the second exhibition in this space, consisting of works by mainly Melbourne-based artists and curated by the Lyons from their collection, which begins in the late 1980s. In effect, it moves the private collection that is next door into a conventional gallery setting that attempts to mimic the domestic space. Works are hung salon-style in the central gallery with the lights dimmed and couch seating provided, and video works line the hallway. Although many artists had multiple works on display, they were often dispersed throughout the space, highlighting that this is to be read as a collection as a whole, rather than a story of particular artists.

As a collection that reflects its collectors’ style, it is possible to read these artworks through the lens of Corbett Lyon’s profession as an architect, with a focus on structures, materials, bright colours and abstraction that recalls shapes that constitute buildings. The city is central to architecture as seen in Louise Forthun’s paintings. Eiffel Tower, 1989, focuses on the strong lines of this icon recalling the 20th century futurists who celebrated the dynamism of the metropolis, while Shimmer, 1999, could be read as a blue cartographic view of a city, rendered with the energy of its title. The regions come through in Callum Morton’s print Mac Attack, 2001, which depicts the exterior of McDonald’s in Wahroonga. The crisp and bright pop treatment of the global import elevates its banality.

Patricia Piccinini is known for hyperrealist sculptural works of hybrid creatures, and like other artists in this show, the selection of her works are not what is considered typical, which is refreshing.

In Panel Works, 2000, 60 panels of 50 by 50 centimetre plastics in monochromatic tones of blues and grey were painted with automotive paint, their forms indented in a manner that recalls cars with a curvaceous anthropomorphic twist. Assembled to create a long rectangle, they appear like a façade of a building. A sheen also radiates from Polly Borland’s photo of Queen Elizabeth. The realism of this work stands out amidst the predominantly non-figurative works in this collection, although the way the Queen is lit – with a bright front-on flash – gives her wrinkled skin an artificial luminance.

A walk through Melbourne’s CBD reveals buildings with brightly coloured facades in contemporary materials – the style of Lyon and many of his architect peers — sitting amidst twentieth century art deco and modern high rises, which creates the city’s distinctive characteristics. Fostering a relationship between art, architecture and design is the long-term goal of the Lyon Housemuseum Galleries. In Full View reveals how contemporary art already flows into Melbourne’s architecture by influencing its architects.

In Full View: Works from the Lyon Collection, Melbourne is showing at the Lyon Housemuseum Galleries, 7 September 2019–26 January. 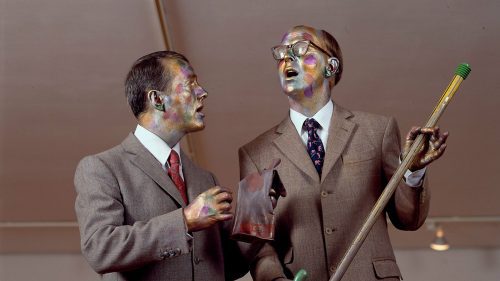 Art in the Public Eye 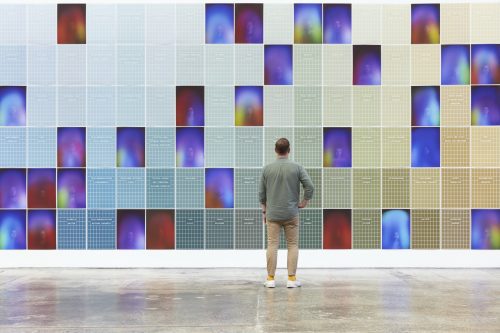 The compassionate, connective relationship one can potentially have with one’s self, as well as with others, is the fertile grounding of Kate Mitchell’s large-scale installation All Auras Touch.